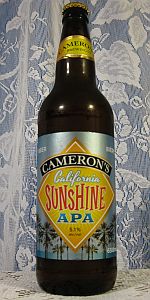 Another interesting selection from Cameron's Brewing! I quite like the overall packaging and appearance of this brew. I didn't pick up much nose, but the flavours pop out when you get them in your mouth. For me, grapefruit is the dominant taste, both in the mouth and afterwards - it reminds me of drinking unsweetened grapefruit juice. There are definite hop and pine notes, as well, but the sour fruit takes top billing. This beer definitely makes me think of sunshine - I would love to give it a go with sand between my toes!

Got this one at the LCBO in Waterloo this past summer.

SMELL: Caramel, honeydew melon, lemon and some grapefruit on the nose. Bold and plenty interesting. Nice.

TASTE: Pale bready malts and caramel sweetness up front, then some more caramel and bitter hops at the swallow. Bold and lingering finish of sweet melon, butterscotch, bitter grapefruit and pine for sure. Lots of bitterness lingers on the palate. Perhaps a touch too bitter for the style, but still plenty flavorful.

OVERALL: Solid CA style pale ale. Plenty of flavor and aroma with a good, creamy-smooth feel. Perhaps a touch too bitter after the swallow, but the rest of the flavor profile is quite nice. Quality west coast style pale ale from these guys. Cheers!

The carbonation is fairly benign, not too much a-bubblin' 'round here, the body a solid medium weight, and actually quite smooth, despite all those rabble-rousing hops mucking about. It finishes off-dry, the sheepish malt and fruitiness holding down the fort.

An enjoyable enough west coast-style APA, the hops really wearing as many hats as they can here. It's not in the same league as your Sierra Nevada, Stone, or even Lagunitas offerings of the style, but I'm sure it plays well in Ontario's rust belt.

A- Murky yellow gold color with a small head of white foam diminishing to a small ring of lace around the glass.

S- some bisquity malt with a touch of grass as well as some fruity esters, peach and citrus fruit.

T- Slight malt up front but mainly alot of citrus and pine, grapefruit and naval oranges, assertive bitterness in the end. Finish is clean with more pine in the aftertaste.

M- Lighter bodied APA. Carbonation was a little spritzy i found but not much of an issue.

Overall this beer is all about hops. Lots of juicy hop flavors. The aroma doesn't represent the flavor profile. Nice tasting beer but it was a little unbalanced.
Worth a try especially if you are a hop forward beer drinker.

Bottle: Poured a bright yellow color ale with a nice foamy head with great retention and some good lacing. Aroma of fresh citrus notes is quiet pleasant with some resin notes also noticeable. Taste is also a mix of citrus and resin with balanced bitterness level and light malt presence. Body is about average with good carbonation. Well brewed APA with nice hops kick and good drinkability.

I suppose that California Sunshine is bright and golden enough to live up to its name (in appearance anyhow). Even then its faint filminess makes me hesitate a little. Still, a beer like this does scream sunny summer drinking (patio all the better) and looks more than agreeable.

The aroma, with its essence of tropical and citrus fruits, is rather delightful as well. Though nowhere near as aromatic as my favourite authentic Californian pale ales, there's still the requisite presence of mandarin, tangerine, pineapple, and grapefruit. The difference is one of degree not of kind; the aromatics profile fits the bill.

The taste, on the other hand, is foremost grainy and biscuity, with a grassy, green tea-like herbalness on the finish. This isn't the conventional profile of a southern Californian pale ale. Most of the citrus appreciated in the aroma evaporate on the palate, with little of the juicy flesh or bitter skin flavours of the fruits lasting very long.

The biscuity, doughie mouthfeel is definitely a disappointment for a style that should be characterized by candied citrus and other tropical fruitiness; it may be American in design but it's British in delivery. Its overall demeanor is probably more mild and malty than it is exotically fruity.

Have the folks from Cameron's been to California? Lately? They obviously weren't drinking at the same craft beer bars and microbreweries I frequent when in the Bear Republic. California Sunshine is a nice beer, but it would be eclipsed by the likes of Stone, Green Flash, Lagunitas, Firestone, and true classics such as Anchor and Sierra Nevada.

Bomber picked up at the LCBO; no apparent freshness info. Served well-chilled.

This brew pours a pale amber-blonde colour, topped with one half-finger of soapy white head. It soon wilts, leaving behind a loose cap/collar with a few smidges of lacing on the glass. The aroma is fairly light, consisting of lemony citrus, mandarin orange, pale malts and some grassy hop notes. About what I expect from this style.

An enjoyable pale ale. Grainy, biscuity pale malt sweetness interacts with a range of hop flavours - citrusy notes of grapefruit and lemon pith, in addition to more grassy, earthy flavours toward the tail end. Almost herbal in the aftertaste, with a mild earthy bitterness that lingers briefly. Fairly light-bodied, with aggressive carbonation that gives this brew a bite that is well-suited to the style and abv. This is a crisp, sessionable pale ale with a touch more bitterness than I tend to expect from this style.

Final Grade: 3.74, a B grade. There is nothing especially wrong with Cameron's California Sunshine APA, but at the same time I am having trouble coming up with reasons to consider it much better than average. This one tastes a little stronger (and more bitter) than most APAs on the market, but in the end California Sunshine just fails to come together as exquisitely as some of its competitors. Good stuff that is worth a try, but not really exceptional IMO.

Pours a classic beer color of light gold. Light carbonation. Medium white head. Aromas are citrus, but less of that than expected, with a considerable grassy herbal presence, and quite prominent biscuits and crackers. Tastes are of mild citrus, light earthy malts, and a dry, grapefruit bitterness on the swallow. Overall a nice blending of aromas, tastes and summer session drinkability.

A - Pours golden with good carbonation and a two finger fluffy white head. Little bit of haze there too. Great lace rings and a film of retention.

O/D - A nice pale ale from Cameron's. There is a touch of off flavour with the hops, but otherwise it's pretty nice. I enjoyed it.

Smell - Citrusy, namely grapefruit and also an earthy dank aroma. Reminds me of a forest after a rainstorm, Maybe some hints of lemon in there too.

Taste - Quite bitter from the hops, a pleasant blend of earth and grapefruit. Low malts but pretty tasty. Some lemon zest in there perhaps. Wish it was a bit more balanced, but still pretty tasty.

Mouthfeel - Medium-full bodied as far as the style goes with a very dry finish. Moderately high carbonation works seamlessly with the beer here.

Oerall- A pretty solid brew, a little more bitter than my tastebuds prefer, but more power to the hopheads out there. It's not terribly balanced, but still worth drinking. For a similar price though there are plenty of other similar beers that you can buy two cans of instead of the lone bomber.

bomber into a nonic pint glass. a quick visual scan reveals no bottling date or best before code

a: deep yellow and outrageously clear -- you could read this review through a glass of this beer. three fingers of sparse slightly off-white head from a careless straight-down-the-middle pour. good lacing. looks a hell lot like california sunshine

t: it's like drinking orange juice, minus the sweetness, with a harsh and lasting grapefruit bitterness. some nearly-absent malt notes on the cough/throat clearing. yep, finishes dry

California Sunshine from Cameron's Brewing Co.
Beer rating: 83 out of 100 with 45 ratings