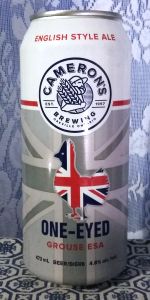 For every Collective Arts and Great Lakes gem, ten Nickel Brook or Cameron's garbage is released on the unsuspecting public.
Here is another one. This is the fourth disaster in a row that I had the misfortune of trying from Cameron's and it is safe to say that I will be very, very hesitant to try anything else. Honestly, I can't remember trying four such poor quality offerings from the same brewery in such quick succession.
This dirt tasting nothing is no exception. I am not even going to describe it. If you can't tell the difference between hogwash and proper beer after sampling this, there is no point.

Pours a clear amber-bronze colour, fitted on top with an inch of soapy, off white-tinged foam. It dissipates over the course of the next few minutes, caking the glass with a lovely curtain of lacing as it recedes; a narrow collar of foam and a few scattered patches of froth are the other remnants. Caramelized malts and toffee on the nose, mixed in with notes of plum, pear, pastry crust and some tea leafy, floral hops. Markedly English-leaning so far, as advertised.

A good, flavourful session ale. The malts have a doughy, biscuity taste to them, also imparting a subtle caramelized sugar/toffee sweetness that lasts to mid-sip. Hints of plum preserves and pear, with the English-style hops leading the charge to the finish. Kind of leafy and floral, with an earthy bitterness carrying on into (and then slowly fading from) the aftertaste. Light in body, with moderate carbonation levels that generate only a modest bite; undoubtedly, this is a smooth-drinking pub-style ale that slides down the gullet effortlessly.

Final Grade: 3.79, a B+. I've got to give a hearty thumbs up to Cameron's brewing staff for their One-Eyed Grouse ESA, because the glass was empty before I even got this far. It has sessionability in spades, yet doesn't skimp on the malts or hops in an effort to get there. My worry with this one is that the British imports are much more well-established, of comparable (or better) quality, and also tend to undercut domestic "premium ales" (such as this one) on price. I like this beer, but I probably wouldn't pay $3 a can for it regularly.

473ml can from a mixed 4-pack. Served slightly chilled in a nonic pint. I'm glad Cameron's decided to rebrand/relaunc because it's prompted me to try or revisit beers I'd otherwise have passed over. It's all high-quality stuff.

Aroma is dominated by caramel malt. Some faint floral/earthy hops in there too.

This is a satisfyingly malty English pale ale. Solid caramel sweetness plus some interesting dried fruit character. The hops have that slightly tea-like bitterness that I like so much in authentic English-style ales.

Overall, this is a solid local English pale ale. I'm not sure I'd pick up another 4-pack just for this one, but if it was introduced as a regular single offering I'd likely pick it up from time to time. This would be a really nice fall session beer.