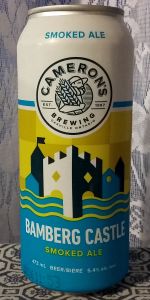 473 mL can from the LCBO; one of two new German-style brews included in their latest Brewmaster's Selection 4-pack. Dated Nov 3 2016 and served slightly chilled.

Pours an attractive, clear ruby red-copper colour, capped off with one inch of beige-coloured head. Looks quite effervescent. The foam seeps down slowly, gaining a denser, creamier-looking appearance over the next couple of minutes, eventually receding down to a smooth, persistent half-cm cap and creamy collar. Nice beechwood-smoked malt notes on the nose - there's a smidgen of that "smoked meat/ham" quality that you'll find in authentic Bamberg-brewed rauchbiers, but its intensity is quite restrained in comparison. Other than that, there's a light caramel note, along with some bready, doughy notes; not getting much from the hops, though.

Approachable - though I use that term in the "relatively-speaking" sense, because smoked beers are very much an acquired taste. This brew starts off with a pleasant caramelized sugar sweetness, slowly ramping up with some bready malt and grainy wheat flavours with a hint of dark fruit. The smoke is more of a factor towards the finish, where it blends together with hints of pine and floral hops, culminating in a bittersweet, vaguely smokey aftertaste that lingers on the tongue for a few seconds after each sip. Medium-bodied, with a smooth, slick texture and relatively mild carbonation levels that weakly agitate the palate. Quite drinkable/sessionable for the style; I could see myself having a few of these in a row.

Final Grade: 3.85, a respectable B+. Cameron's Bamberg Castle Smoked Ale is a nice diversion, and potentially an excellent introductory smoked beer. If you have no experience with this style - or have previously tried a German import (e.g. Schlenkerla) and were totally repelled by it - this is a nice way to dip your feet into the shallow end of the smoked beer world. It's a good effort... but still, if you're an experienced smoked beer enthusiast that refuses to settle for anything less than an intense burst of robust, smoky goodness, then this one may not satisfy your prerequisites.