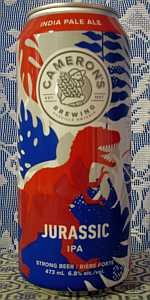 Notes: Like the king of dinosaurs this IPA has a huge presence and refuses to be ignored thanks to its three complimentary hops. A golden hue greets the eyes while the nose is welcomed with citrus grapefruit & mango aromatics. Starts simple but becomes more complex with each sip. The body’s clean effervescence bubbles forth with juicy vibrant fruit tones and finishes crisp and clean. 68 IBUs, with Citra, Summit & Simcoe hops.
View: Beers | Place Reviews
Reviews: 7 | Ratings: 15 | Log in to view all ratings and sort
Reviews by thehyperduck:

473 mL can from the LCBO; coded Jun 24 2019 and served barely chilled. Cameron's is one steady, reliable Ontario brewery that seems to sneak under a lot of radars, and a top notch IPA could very well do their portfolio a world of good.

Pours a relatively clear golden-yellow colour; it's initially graced with an inch high crown of foamy head, which falls apart at a casual pace. Five minutes later, there's a gorgeous curtain of sponge print-patterned lacing left in its wake, as well as a sudsy collar of froth - looks fine to me, but its aroma is a tad on the muted side. I'm getting some grapefruit, orange and tropical fruitiness, with just a hint of spicy hops.

It took a few sips, but I still warmed up to this brew quickly - it's a hop bomb, and a fairly good one at that. It has a grainy pale malt backbone, but it's the citrusy hops that soon take over my taste buds, with pink grapefruit and mandarin orange both coming to mind. Suggestions of melon and passion fruit come through on the back end, alongside a lightly resiny, bitter note at the finish. Medium-bodied, with middling carbonation levels. For a beer that sits closer to the top end of the regular-strength IPA abv spectrum, I found it very drinkable, and in a style where that is not usually the case.

Final Grade: 3.94, a B+. Jurassic is a well constructed strong IPA that hides, or at least integrates, its sturdy abv nicely enough. Other than their defunct(?) RyePA, this is probably the best Cameron's pale ale I've had to date. I still don't know if it's good enough to stand out in the very crowded ON marketplace, but I enjoyed my can, so I'll be picking up more as long as it remains fresh - and I'd encourage other BAs who can find a can from this first run to try it sooner rather than later.

The beer poured with little head, and a golden orange colour with quite a bit of haze. Taste is reasonably bitter, and lingers with a bitterness on the tongue. Not as citrousy as I had anticipated.

Pours golden, slightly hazy with a big puffy head. General hoppy sweetness, not very bitter. One of my favourite IPAs. Exactly what an IPA should be
February 14 2020

At the eyes: deep golden with a very foamy head that stuck on the glass.

Nose: soapy; deep hoppy l and oily with a shy hint of malt.

In mouth: The hops hit first but not much; actually it is well smooth. The mouthfeel is smooth too and well balanced.

473 ml can served cold into a pint glass. LCBO purchase for $3.25 CDN. Canning date is illegible.

Appearance - Rich and hazy golden color capped with a finger and a half of brilliant white head. Good staying power and moderate lacing.

Smell - Fairly malty, with subtle caramel and an earthy, piney hope presence with some grapefruit. Can imagine the pine sap leaking from a big old pine tree.

Taste - West coast IPA all the way, piney flavors, earthy bits, some orange and grapefruit. Fairly bitter but with a substantial grain and malt backing.

Overall- This review is probably a bit biased, but it was really nice to have a new west coast style IPA to drink, given the amount of haze bombs, milkshake IPA's and lately "sour" IPA's out there. So if the ratings seems to high they probably are but it was a nice trip down nostalgia lane. Will pick up some more of this and look into Sawdust City's Lone Pine IPA as that is one of the best available fresh west Coast style IPA's.

A-golden yellow with a slight chill haze. White head dissipates quickly leaving very scant lacing
S-Malt forward aroma which includes elements of molasses, honey and pine
M-Peppery carbonation with a medium body
T-Sweet upfront with a spiced, almost cinnamon flavour coming from an assertive bitterness
O-Standard IPA that leans on malt and bitterness as classic elements that I feel have had to leave their place to various new styles and flavours in the IPA bracket. Too much bitterness in my opinion...

Pours clear orange with a creamy, diminutive head. Lots of lace webs drape the glass. Woody hops, raisin bran, some citrus in the nose. Herbal, woody, cedar, lemony hops in the taste. Plenty of toasty malt notes give lots of balance. The mouthfeel is medium bodied with subtle carbonation. Light bitterness and lingering roasty maltiness in the finish.

A nice IPA with lots of English-like hop notes and a lot of maltiness. Worth a try and I'd classify it as an English IPA.

Jurassic IPA from Cameron's Brewing Co.
Beer rating: 85 out of 100 with 15 ratings