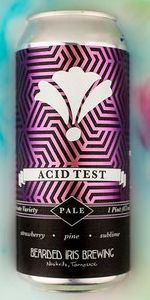 Very acidic and bitter, as the name might suggest.

Nothing wrong with it, per se, but just not my favorite.

Hitting the hoppy styles from all angles, the Bearded Iris team of hopped up beer makers take on a random but bold hop blend for an American pale ale that tries to redefine the style while giving southern hop heads the lupulin laden tipple that they deserve.

As the ale embarks upon the middle palate, the malt sweetness quivers and the hops step up. The beer's tangy demeanor hangs on the taste of tart red berries, under ripened orange and pink grapefruit and with the succulent twang of passionfruit and kiwi. The hops quickly turn from fruit and toward spruce as the beer's assertive bitterness is cast in a shadow of fresh grass clippings, muddled pine needles and soft peppery resins.

Medium bodied but trending light and dry, the beer's malt sweetness eveaporates well before the finish but its starchy graininess continues to support the hops and create a slightly hop forward pale ale taste. Not as bitter as IPA, the beer's finish is smooth, creamy and crisp in the same sip. Its medium length aftertaste is of leafy vegetation, berry-like pectin and soft spruce.