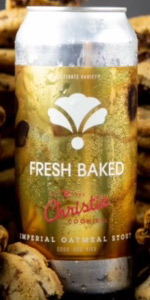 Poured into a snifter. Nice dank color with a thick and long lasting tan head. Nice lacing in the glass. Aroma was sugary cookies and milk chocolate. The taste followed. Very sweet. Chocolate and some soft bitter notes but this was pastry without a balancing presence. Good for what it's designed to be, but too sweet for me.

Can:
Pours black, with a nice light brown head. Nose isn’t jumping out of the glass up front. Opening flavors are chocolate cake doughnut on a thicker creamy feel.

Head maintains a medium thick collar, and with each glass top, the beer looks like a splash of cream as it hits coffee. Nose doesn’t open up greatly, but chocolate cake impression. Sweetness starts to catch up, but not as much as expected given its level. A light char back helps, I think.

Bring your sweet tooth when you go for this one. It’s an enjoyable dessert, but might not work as anything but. It’ll take a certain kind of person to drink more than one in a row, I think.

this is an enormous beer, a small pour i think would have been the move here, its a lot to drink and its diabetically sweet, but its also really delicious, brewed with actual chocolate chip cookies. i also think they could have left the lactose out here, who needs it with all the milk chocolate sweetness here and all the vanilla, it seems totally unnecessary, and it really does take away from any semblance of drinkability, even if it adds some creaminess texturally. the base stout is high end, with a nice roasty low end and a ton of body and even flavor from the oats in the mash, this would be solid on its own to be sure. the vanilla is robust in nose and taste, as is the fudgey chocolate element from the cookies, totally over the top, this drinks like brownie batter. its got brown sugar and cakey sweetness to it, tons of sweet milk chocolate, and plenty of booze too, especially as it warms up a bit, but there is also good bitterness from the dark barley in the end here, and this is smooth and fancy overall, very well made, and decidedly unique with the actual cookies in here. i liked the hoppy stuff a little better here at bearded iris, but this is a pretty compelling pastry stout all told!

I feel like no one is going to say this about a (deservedly) wildly popular brewery, so I will.

Look. I adore--ADORE--Bearded Iris. I go there most weeks, often many times a week. My fridge almost always has a product of theirs.

But I wish that in their attempts to brew an Imperial Stout, they would take it easy on the lactose. They are too talented of brewers to diminish the balance of what is assuredly a great base beer (I am assuming this is the same base that they used with their other recent stouts, but I might be incorrect) with so much milky sweetness. I know what they are going for and I appreciate it, and I think in more restrained doses they could pull off something really special. But this is not a successful experiment.

Beneath it all, I can tell there is a great Imperial here. And I say that mainly because of the mouthfeel, which the sweetness doesn't really affect, and it's great! It's dry, it's just a little bit sticky, and it's super pillowy. And beneath the complaint I have with respect to the taste, the hallmarks of a very solid stout are here, one that--considering the pedigree of the brewers--very well might transcend "very solid." There is an earthy component--tree bark it seems, I can taste baker's chocolate and oatmeal too in pretty impressive balance. It's all there, it's just overwhelmed by what I would say is a poor decision with the ingredients.

Bearded Iris is a must for anybody in Nashville--Homestyle, Attention Please, Offbeat, Chasing Rainbows, Mood Ring, Chief of Chiefs...these are all astonishing beers. But at this point in time anyway, if you're in Nashville and in the market for a dark beer, New Heights' Navel Gazer; Black Abbey 44; Yazoo Sue; Turtle Anarchy Portly; Fat Bottom Baroness; Blackstone St. Charles; and whatever ungodly delicious dark beer Southern Grist is pumping out at the time are all better, and for the most part much more affordable.

Fresh Baked from Bearded Iris Brewing
Beer rating: 87 out of 100 with 11 ratings