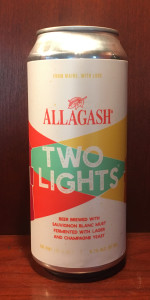 Notes: Two Lights is an ode to two of the more refreshing drinks of summer: cold beer and sparkling wine. While brewing this beer, we add Sauvignon Blanc must—the freshly pressed juice of the grapes. Then we ferment it with both lager and champagne yeast to create a tart, crisp, and dry profile. The finished beer’s aromas of pear, grape, and light hops pair with a flavor profile that’s a mix of tropical fruit and the snappy spritz of a freshly picked grape. We suggest sipping Two Lights by a water source too large to see across.
View: Beers | Place Reviews
Reviews: 43 | Ratings: 124 | Log in to view all ratings and sort
Reviews by drtth:

The slightly hazy pale yellow beer pours out into a Duvel glass with a 1/2” white head that eventually recedes to an irregular island of foam on the surface of the liquid while leaving a layer of foam and lacing on the sides of the glass. Sipping creates two arches of foam that quickly become some patches and legs of lacing.

The aromas include some green orchard fruits, some white wine and some pale malt and wheat. There are touches of some tropical fruits and a light herbal character.

The flavors are much as expected from the nose with the malt and wheat and their light sweetness backed up by the white grapes, the green orchard fruits, a bit of tropical fruit, just a bit of tartness and some almost completely hidden dry herbal bitterness.

The mouthfeel is on the light side of medium bodied and fairly smooth with the finely bubbled persistent carbonation. The moderately long finish begins as the sweetness and fruit flavors begin to fade away, leaving a fairly dry, lightly tart ending tinged with some light herbal bitterness and residual fruit flavors.

Definitely an interesting and refreshing beer that is clean, light, slightly tart, crisp and worth having again. The aromas/flavors blend together quite nicely. I'd say the brewer hit the target on this one but that it is both a refreshing beer for a summer's day and also a nice aperitif any day.

i like everything allagash does, and this is another fun one. grape must and champagne yeast, but also a lager, pretty rad idea, especially as a summer seasonal, which i think is arguably the season with the least exciting seasonal offerings from most breweries. this has a wonderful fruity complexion from green grape to ripe pear to honeydew melon and kiwi fruit, the sauv blanc must quite obvious in both the nose and taste, but instead of making this overly vinous, the champagne yeast and lager yeast come into play immediately, drying this out, crisping it up, and keeping it plenty beery. even though the grain flavor is really light, the lager yeast has enough character to keep this one the beer side. light tannic funkiness here too helps with that. there is a slate sort of minerality to the finish which i like a lot, the skins of the grape more than their juices, and subtle pineapple and lime tropical notes too. really tasty and drinkable beer, i love the mouthfeel from both yeasts working together, not sure i have seen these two in cahoots before, but its an excellent combination. killer beer, forever drinkable, and definitely distinctive and creative and unique, i loved it.

It is difficult for me to score this beer. I had it at the brewery and thought it was great, but in the bottle it seemed to lose some of the brightness and vitality it had on tap. I guess I have to mentally average the two, but since this beer is being distributed in bottles I think it is important to make note of the difference.

The beer pours an incredibly pale yellow with a shorty, fizzy white head that falls to a ring of kinda big bubbles. It's a little cloudy on the pour, but it clears up nicely. Very pale color reminiscent of white wine. At the brewery, pretty much crystal clear from the tap.

On tap, this beer has a very bright aroma that is clearly heavy on the wine grapes, pear, sour apple, and a little lemon riding over a bready malt reminiscent of a pilsner. In the bottled version, this aroma is very subdued and it loses some of the layers in a more or less generic fruity aroma. The malt is much more forward.

The flavor follows suit - on tap, very bright and lively with the grape must dominating, supported by the light citrus. The malt is not highly assertive, but is detectable. In the bottle, to my mind these things flip. There's a higher presence of the malt, with the fruity and more interesting aspects of the beer reverting to a supporting role. There is also a slight bitterness in the bottled version.

The feel is light, almost effervescent but not overly carbonated. Crisp with a dry finish.

Overall, mixed feelings on this one. The bottle version is certainly not a bad beer, but the on tap version set some high expectations that clearly went unmet. My wife agreed that these differences were pretty obvious. If the bottled version "measured up" to the beer had on tap, it is certainly an enjoyable summertime drinker. As it is, I'd rather go to the source to drink this beer.

not really my favorite style but for a lager this is probably as good as you are going to get, coming as it does from the Allagash family of beers. This one drinks as well as any other lager that I've had

This one pours a clear and vivid gold straw color, with a small foamy white head, and lots of lacing.

The aroma on this is so soft and delicate, with pear, vanilla, green grape, hay, champagne, and pink grapefruit.

This is really intricate and tasty. There's lots of soft fruit flavor- mostly creamy pear, pink grapefruit, sweet grapes, and a bit of champagne type sweetness. There's not a ton of funk here, just a bit of hay and grassiness.

This is pretty light bodied, and very clean, with a slightly creamy mouthfeel, a soft level of carbonation.

This is a really fun beer- it feels stripped down while still being intricate and complex.

O:
An all right beer all told, but it was neither what I expected nor wanted based on the description.
It looks fair with a nice, interesting aroma that is heavy on the champagne character. However there is not very dry or crisp in any other ways. Lots of doughy sweetness. Like I said, not bad. But definitely pretty flabby and sweet with some very wine-like character. An interesting beer and I'm glad to have tried it. (3.5)

Pours a slightly hazy pale straw golden, very much in the mold of a champagne. Musty grape aroma, that Sauvignon juice is very apparent. This was what it was advertised as: grapey and refreshing. Interesting experiment from Allagash.

Bottle dated 6/21:
A straw body forms as the contents of the bottle splash into the glass. The beer seems clear out of the bottle, forms a decent haze as the beer settles, but manages to transform into a barely hazed body once things are calmed down. A nice white lid sits nicely atop the beer - sustained by an etched glass.

Nose has a light wine-like side to it. The grain has a little say, but grape, lemon zest, and a fruity yeast note, initially. A more defined aspect of the lager yeast comes out with some warmth.

Taste is a little sweeter than I expected, and the fruity aspects the brewery indicated come through. Mainly the pear - that is what the sweet note at the beginning seems like - a juicy sweet pear. There's a lightly herbal bitterness that puts up a little resistance to the sweetness. There's a little blast of carbonation up front, but a light and soft body follows in a nice yin/yang way. The beer dries up throughout the sip - turning the flavor into more of an unsweet apple. A little dry grass and an even lighter peppery note accompany the beer as it exits my palate.

Definitely a refreshing beer that I wish was a little less sweet up front. Light and quite clean, Allagash's description is fairly accurate on this one.