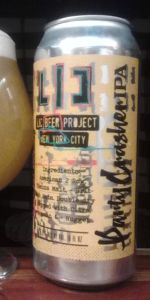 Canned 11-12-19
Pours light orange, whiter base. Nice foamy retentive head, and thin sticky lacing. Aroma is heavy on the citrus, mild on tropical (muted) and pine. Taste is citrus, earthy and a bit on the bitter side. MF is medium, and carbonated.

T: Mellow but also moderately bitter grapes and unripened strawberries. I did not personally find any diacetyl here.

F: Medium-thin, well carbonated and mostly dry. I like the feel here.

Kind of tangerine and orange flavor. Low ABV makes this cloudy neipa a winner. Only had one can from my local bottle shop but was well worth it. Would love to have more. LIC is solid

Cloudy citrus smoke liquid. Froth. Tangerine, papaya, lemon, mango, grass, cream in the nose. All of the above in the taste but with added layers of sorbet cheesecake and hop bitterness and spice. Thick. Real good if you’re in the mood for a NE IPA.

From an undated can, but tastes fresh. Pours a hazy golden orange with a huge white head that leaves thick lacing. Smell is huge and fruity, with peaches, pineapple, and general tropical and citrus notes. Taste follows, with an added touch of earthy herbs. Amazing beer, especially impressive at this ABV.

I only drink IPAs and only love NEIPAs. Hate me all you want, but I only admit my shortcomings so that you might appreciate this review if you are similar. I spent a few hours at LIC's taproom tonight sampling IPAs. This was the lowest abv and the best tasting, which should serve as a HUGE endorsement to anyone who drinks modern IPA. To fortify my point, I'll point out that the easy second choice was the 8.5% IIPA. All the 7.whatevers were very good. So your choices are to drink a bunch of very good 7.5% beers, or an even better 8.5% (so far, this should seem very familiar), OR an even better 5.5%.

O - wish I wasn’t so sensitive to diacetyl.

A: The beer is very cloudy whitish yellow in color. It poured with a half finger high white head that left a thin layer of bubbles covering the surface and some lacing down the sides of the glass.
S: Moderate aromas of cantaloupe melons are present in the nose.
T: The taste follows the smell and has lots of flavors of melons along with hints of citrus. Little if any bitterness is perceptible.
M: It feels medium-bodied and a little crisp and juicy on the plate with a moderate amount of carbonation.
O: This is a nice IPA if you really like melons. In some aspects, the juiciness and lack of bitterness makes it taste like a New England IPA.

Picked this up the same day as the SAMO and like it, finally got around to having this tonight. No date on the bottom of the can but I'd guess that it was canned on or about 12/21. This was quite light in hue, body, and taste but for a sessionable beer, had everything in it that I could have asked for!

As per the other LIC beers, this one had a wonderful pour that I could have admired all day - a nice, dank melon hue, full but thin head, and *tons* of thick and soapy lacing down the side of my pint glass all combined for a very appealing look for this beer. Once again, the aroma lagged behind but there was melon and cut grass in it with hints of dankness. Of course, those were all in the taste along with stone fruit, pith, and some juicy citrus. The mouthfeel was like that of Perrier or mineral water as the carbonation was quite lively. The Vienna Malt and British Oats gave this enough body without making it feel like there was bread or dough in here and a hint of banana esters rounded out this brew.

While not a true session beer, it would be so easy to crush another one of these down after polishing this off. There wasn't anything outstanding about this beer but sometimes, you want something well-rounded and light enough to savor all day long. This would fit that bill and was another example of how fast LIC has grown in the last few years. This should be categorized as an American Pale Ale given the alcoholic content and balance here, as the hops were not that distinct. A great beer for any type of party!

Poured from a 16oz can into a speiglau IPA glass.

Aroma is of herbal citrus hops.

Taste is a lot hoppier and fuller than the 5.5abv would expect.

This is the type of sessionable IPA I'm all about. Delicious.

Poured a murky orange color with a fingers worth of foamy white head. The nose has a lot of sweetness to it with pineapple, mango, and melon leading the way. The flavor has a bit of bitterness but mostly sweetness to it, like a bowl of tropical fruit with tiny pieces of grapefruit. The feel is very light and delicate but smooth at the same time. Does not feel like your typical IPA. This is a well done IPA with tons of flavor and very drinkable at 5.5%.

Grapefruit-colored and opaque with a big white head that persisted to the end and left plenty of lace down the glass. Aromas of citrus and grass with floral accents. Muddled mash of mild citrus, with grapefruit being in the mix, mildly bitter, mildly sweet; very soft and fluffy-feeling with a nice clean aftertaste.

Overall very drinkable and tasty; not the happiest beer in the world but they're out front and it's very good.

Moderate pour yields a 3/4 inch head that is down to a ring in a few minutes with a very hazy, dirty dishwater body. Lacing at first and that, too, is gone in a few more minutes. Nose of tropical fruit, citrus, and some pine. Taste follows with an added yeastiness that can't be overlooked. Medium feel and overall? I think I'm being generous with this one. I'm thinking this was near the end of the canning run and they should not have let this one out the door. It's called quality control and they should be more careful.

F - light bodied, fairly high carbonation, not what I usually look for but appropriate for a more sessionable ale

O - NE style juice in a sessionable package, but they should market this as a pale ale

Full pour at the brewery in a wine-glass shaped glass.

Excellent color. Straw-colored and golden with a light haze and a bright glow. Pale white head in abundance.

The aroma is excelent and shows mango, pineapple, melon. Clean and alluring.

Taste is just killer to me and it's aided by a superb feel. Such a delicate touch and lightness to the body without being watery. Still has plenty of richness, touches of sweetness, minerally qualities and light carbonation and bitterness. As for the flavors here, the honeydew that bursts from this is lovely. Pineapple, passionfruit and mango all complement that core.

I want more of this. I didn't fill a growler but I should have. Phenomenal.

Poured from a fresh crowler dated 6/7. A bit of a muted nose is more than made up for by the beautiful look of this beer and amazing lacing. The Citra/mosaic mix is such a drinkable combination and at 5.5 abv this is one terrific summer beer! Well done LIC!

The beers hits of fresh hop pellets, green herbaceous, citrus, lemon peel, pineapple, dank, gentle bready malt. The mouthfeel is medium minus and glides away pretty quickly, with a dry finish and barely any bitterness. The aftertaste offers more of that citrus peel and light dank.