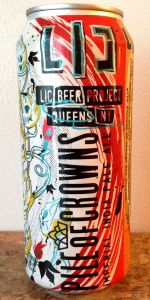 Notes: Pile of Crowns is a medium bodied Imperial IPA, which employs a blend of hops including Citra, Mosaic, and Nugget. This exceedingly aromatic ale entices with peach, mango, and papaya. It finishes smooth and dry with accents of orange and berries.
View: Beers | Place Reviews
Reviews: 19 | Ratings: 113 | Log in to view all ratings and sort

This was an exceptional IPA. I had it on tap at Extreme Beer Fest 2018 and wish I could get more!

The beer definitely had a nice look and smell of a modern IPA. The flavor featured peach and mango vibes coming with a creamy body. The hops were present and added a nice dry finish on the palate with some orange notes. Very smooth and enjoyable with no alcohol burn.

Easily an A ranked IPA competing with some of the best out there!

Pile of crowns... wish they had it more often. Really special brew from a fantastic brewery. These guys are on the cusp of becoming one of the most sought out beers of the east coast. Phenomenal fluid.

A- Golden color with a huge amount of haze.inviting.

S- my living room is filled with tropical fruit aromas....no need for scented candles, this does the job.

F- pretty creamy and full bodied for an ipa.

Too dry & boozy for me; this was drinkable but not real enjoyable.

Picked this up when it was released a couple of months back and finally got around to sitting down with this tonight. Even though I'm from New Jersey, I've worked in the Big Apple for 5+ years now and am so pleased and proud as to how big the beer scene there has become. It's breweries like LIC Beer Project and offerings such as this that have changed the game and after finally having a whole can of this, it's easy to see why people enjoy this beer so much!

Nice pour to this as the beer was cloudy, blonde, and full of a massive head that quietly settled down. Plenty of lacing was left behind on the back side of my pint glass as I worked my way through this as the foam never truly settled down. Lots of malt, tropical notes, and berry juice in the nose with more in the taste. Mango and papaya were present in a big way when I took a sip of this as the citrus juice and pineapple came through in the back side. This reminded me a bit of the Tired Hands / Omnipollo beers when it came to the taste and smoothness as the hazy goldenrod hue was a precursor to the easygoing nature of this brew. A slight dankness and some weed were present in the back but the range of fruit flavors and juiciness that were inherent still won out in the end.

There was plenty of alcohol here but it wasn't overt in any way as I only felt a slight warming sensation and light amount of booze when I worked my way through this. The only drawback to this was the slightly exaggerated amount of malt here, which bordered between lactose and wheat. This beer was more than full and slightly sweet, which complemented the range of flavors here and for a first effort, this was certainly admirable. It's nice to see LIC Beer Project have the Basquiat-themed design for the can as it was a nice design touch and a tribute to a New Yorker who passed way too young. This beer hit the ground running and easily proved that these guys can keep up with other breweries in Gotham!

My first beer from these guys - and in full disclosure, I'd never even heard of them before receiving this, which speaks to the number and quality of brewers we beer nerds are blessed with, because this is world-class.

An aggressive pour reveals an über murky straw-colored beer propping up a finger or so of slightly off-white head. It looks like a beer milkshake - and I lover beer AND milkshakes, so I'm about to faint.

The smell is waves of hops - I get grapefruit and pineapple piled up high.

The taste follows the smell - MASSIVE grapefruit rind, and sweetness from the pineapple to balance it, then just a hint of alcohol at the back of the palate.

The feel really adds to this experience - a creaminess (from oats maybe?) that makes this 8.5% ABV beer go down SOOOO smooth. I could sit at a bar and pound this - and then get off my stool and wonder why the world is tilting. Just a phenomenal beer, IMHO.

Let me start out by saying that I'm a HUGE fan of Other Half and Singlecut, but this is the best IPA in New York. Easily right up there with NE big boys. Absolutely outstanding. Look forward to drinking this again

I noted a change in color between cans, from a hazy golden to more amber. the taste anyway is always very tropical and juicy

Edit:
Second Canning: even more delicious, you can smell it across the room and the taste is absolutely great even better than the first?

Hazy golden/straw appearance. One finger of head that dissipates fairly quickly. Huge ripe tropical notes on the nose, mango, peach, maybe pineapple? Taste follows with a touch of earthiness & pine on the back end. A low to moderate bitterness that fades. Super drinkable & delicious. One of my favorite DIPAs in New York.

Had to review this one.

One of the best ipas I've ever had, which is saying a lot since I regularly have all three of the New England heavy hitters. A blast of juicy hops up front with a very slight, barely noticeable bitterness towards the end. Its a slick beer and is so smooth.

Honestly, everything you could possibly want in an ipa is here. Grimm has been making some amazing ipas but this is my new favorite out of NY and one of my favorites overall in the style.

It pours a super cloudy neon orangish gold color with a short white head that leaves very little lacing. Taking in the nose is a thrilling and complex experience in it's own right. Peach, apricot, and mango are followed by some floral notes and big dank earthy tones.

The taste is a glorious adventure through everything that makes a great IPA. Kiwi, grapefruit, and banana introduce us to the experience before a blast of super dank earthy raw hops punches you right in the palate. Rainbow sherbet and fresh orange juice bring things back to the sweet side before the subtle biscuit dough malt profile sweeps back into a grapefruity bitterness that lingers just a bit.
Mouthfeel is medium-plus for the style and has a nice creaminess. ABV is well-hidden, as it is in almost every DIPA that LIC makes.

Overall, this is honestly one of the best hoppy beers I've had. In terms of LIC IPAs, I only prefer Hollows to this batch of POC, but it's pretty damn close. This is a top notch juicy dank NEIPA that any hop junky will love.

A: Pours a hazy deep gold / orange with about a half finger of fluffy white head. Almost fully opaque in the glass, similar in appearance to a Tree House beer (not quite the turbid opacity of the TH/Trill, but reminiscent thereof). Big rings of lacing on the glass. Would be close to perfect if the head was puffier and stuck around a bit longer.

S: Mixed notes of dank pine and citrus fruit. Neither really 'pops' out of the glass, but together, they offer a balanced, very pleasing aroma that is pretty pungent overall. In terms of fruit, I get passionfruit, sweet tangerine, and mango with a hint of pineapple. Dankness is a piney with a bit of that 'cat pee' character that reminds me of some west coast beers.

T: Much more powerful and fruit-dominant on the taste. Dankness is still present, but it's more grassy and takes a backseat to the sweet fruit notes. Up front, I get tons of sweet citrus--tangerine, orange, and grapefruit. Lots of passionfruit, peach, and papaya as well. Hint of bready malt in the middle transitions very nicely to the dank notes on the finish, accompanied by the blueberry earthiness I get out of some Mosaic-hopped beers.

M: Extremely drinkable for the ABV. Not the creamiest of beers in its style, but barely a hint of what's actually a pretty big alcohol bill. Great carbonation contributes to a medium feel overall. Medium minus bitterness on the finish complements the juiciness well. This beer also leaves a lingering dryness in the mouth that further contributes the drinkability.

O: Amid a crazy week for NYC-area beer releases, LICBP managed to put forth what I believe to be one of the best DIPAs to come out of the city. It possess qualities of the best IPAs I've had from both the west and the east (though leaning heavily toward the east), ultimately offering an extremely pleasant and easy drinking experience. I'm remarkably impressed at this first can release and supremely excited for the bright future ahead of LICBP. Keep on killin' it, guys!

Outstanding DIPA, I couldn't find any flaws to this one.

Probably one of the best beers being produced in New York. Probably better than Other Half and Singlecut - It's up there with Grimm.

The beer comes in a medium plus hazy medium gold.

The flavor explodes mango, juicy tangerine, passionfruit, juicy for days, with more of that dank pine, bittering slighty, with a light biscuity malt, onto some resin and herbaceous sticking on the palate at the end. The beer offers a medium mouthfeel, offering supreme drinkability for the style with a hint of warming going down. The tropical fruits and citrus exist on the palate for most of the experience.

A wonderful surprise as this beer is arguably the best DIPA being produced in NYC, and even a larger footprint....

It tastes better than it smells for sure. The beer is very dry and gives the hops room to be subtle and nuanced. There's a lot of mosaic in the taste and a very pleasant earthiness (maybe from the nugget?) that isn't super common in these hazy/juicy ipas.

Excellent beer, multi-dimensional with so many layers. Love the dry taste and juicy taste. At 8.5 alcohol not detectable at all.