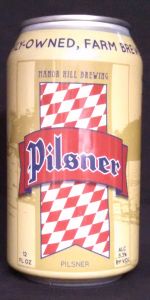 Notes: Our take on a classic German Pilsner was created using corn grown on our very own farm. Leaf Saaz, Hallertau Mittelfruh and Triple Pearl hops provide a distinct German grassiness that is followed by a touch of grain, citrus and a clean finish.
View: Beers | Place Reviews
Reviews: 17 | Ratings: 34 | Log in to view all ratings and sort

A buddy asked me if I would go on a Maryland excursion with him last week & having nothing better to do, I agreed. He is married to his GPS & took us on a winding backroads tour that left me with a headache. I finally got him to agree to follow my directions going home, on the direct route that I would have had us take in the first place. My route took us to Fallston Liquors, where I got several CANned Pilsners, one of which I downed immediately. The CANQuest (tm) CAN be hell at times! 8=p

I pulled some verbiage from their site & submitted it for Notes, but I was jonesin' so without further ado, it was time for a Crack! of the vent & a slow, steady C-Line Glug into my fave Pilsner glass. The foaming action was a bit too much to CANdle, so I backed down & off & allowed it to form two-plus fingers of dense, foamy, rocky, bone-white head with great retention. Color was an oh-so-slightly-hazy Straw-Yellow (SRM = > 2, < 4) & if it clarifies, I'll chalk it up to chill haze. Nose had a lemony breadiness, not quite dry enough to call biscuity, but close. Mmm. Lemon pound cake? With lemon icing? Sold! Mmm.

Man, as a kid, I used to love baking. Both of my grandmothers were mistresses of their ovens, but Grummy ChANdler (paternal) was the one for desserts. She had a raspberry bush in her garden & pies & cakes were a standard. She was right up from the high school & I got both her permission & my teacher's to bring in a couple of quarts of fresh-picked raspberries. We put them in the reefer & then my kitchen-mates & I made a raspberry-lemon pound cake that I CAN taste to this day!

This had the taste of the base lemon cake. Mmm. I CAN see drinking a mess of these on a hot Summer's day. Finish was semi-dry so if you don't like bone-dry, such as the Union Skipjack BoHo Pils, then this will be more your speed. Mmm. YMMV.

From the can, pours a clear golden straw color and a large frothy head with good retention.

First impression of the taste reveal the hops forward and assertive bitterness of this beer. Flavors of lemon, grass and strong earthy spices balance well with the firm cracker, doughy and bready malt backbone.

Light bodied, crisp and lively carbonation. The finish is crisp, dry and bitter.

This is my 2nd beer from this brewery and I’m thus far impressed. Straight forward, finely crafted and very refreshing.

Pilsners are my preferred style for weekly fridge stocking, and this is one of my favorites. Hits all the right notes and at 5.3% ABV, it is perfect for extended sessions. Likely not widely available given the size of the brewery, so if you see this one, grab it. Perfect for serving to a crowd of friends.

Taste begins with a hop firmness that overrides the malt but by mid palate the malt emerges finishing on a slightly sweet note. For me the hops are definitely in the herbal, spicy camp but there is enough malt presence to balance things out.

Overall it's a good take on the style and worthy of the Pilsner name.

Thanks to my buddy D. White for the can

Nice herbal/spicy hop aroma. A bit of a nuttiness from the hops as well. Minimal malt aroma, no off aromas.

A little bit of malt, but pretty much a pleasant hop bomb of a pilsner. Floral/spicy noble hop flavors, and fairly assertive hop bitterness. Bitter and drying in the finish.

Light to medium body, fairly high carbonation as expected for the style. The combination of carbonation and hop bitterness is borderline unpleasant on the tongue - no astringent, but slightly harsh.

Overall a great pilsner from a brewery in my region. Definitely like the aroma and initial flavor more than the finish, but small quibbles.

poured from a can into a manor hill 16oz nonic pint glass.

appearance: looks nice, but not anything special. a nice pale gold with a fluffy white head, roughly 3cm. quickly fades to a wispy cap.

smell: right off the bat, a strong smell of hay and grass. there's a bit of floral hoppiness as well.

taste: the taste is what made me love this beer. the initial taste is slightly bready. following that is a sharp but well rounded pine that lingers and quickly mellows out. notes of honey and biscuit show up in the aftertaste.

overall: an excellent refreshing beer. excellent for drinking in the pool but it's great for any other season as well. the amount of flavor this packs for such a drinkable beer is incredible. i'd recommend this to anyone who likes pilsners.

12 oz can. Slight haze, great retention and lacing. Big nose of crackery malt and floral, earhy hops. Beautiful. Flavor follows and is sharp and a touch fruity. Dry and crisp with a lingering muted malt sweetness.

Incredible beer. Did not expect this.

From the can, it pours a lightly hazy golden amber color (naturtruebes??) with a nice, robust head. Nice hop forward Pilsner scent. The mouth gets an enjoyable lightly malty and hoppy taste. Yum!

Poured from the can into a Libbey style pilsner glass. Canned September 7th 2017.

Hop forward aroma for a pils, that makes a mark somewhere between grass and lemon. A bit of spritzy lemon oil like sensation on the nose

Palate has a hop forward front. Large amouts of lemon and herbal grass flavors on first sip. Chewy body with a touch of sweetness that cuts through a decisive and lingering hop bitterness. Lots of grassy aftertaste and fresh herb finish on the swallow. Mixing dough like malt for a solid backbone a touch of malt sweetness on the end gives a little contrast.

It's a hop forward German pils and while it strays a bit it's a good example of a simple amped up style.

Served in 16oz pint glass at the breweries Tavern a few miles from the brewery.

If you like German Pilsners absolutely worth tracking down. If possible get it on draft ... I've had it in cans and while still good it shows better on draft as most all Pilsners do

I liked everything about this beer, from the great looking can to the last taste in the glass. Best of all, it's fresh (local for me). Nice hazy yellow, with a decent soft foamy head that laced the glass all the way down. Bright hops in the nose, but subtle--not in your face like an IPA. The mouthfeel was also soft, with slight carbonation that enhanced the balanced flavor. Biscuity malt with the mild hops bitterness and hint of fruity overtones makes it easy to drink. No off-tastes or strange/sour aftertastes. Drained the glass and didn't feel it (thanks to the reasonable ABV). I liked it so much I went out and bought another 6-er. Definitely keeping these cans in the fridge for regular quaffing.

Can dated 6/22:
Pours a pale golden with a white haze - blurrying in nature. Head is white and doesn't build too large on my pour, but maintains a cap and provides really nice, full lacing.

Nose and taste both have a note in them that I have found in some German beers (including beers by Hacker Pschorr and Hofbrau). At its worst, It comes to me as an olive-like note. Luckily it isn't too bad or strong in this beer, but it did affect my enjoyment of the beer.

Nose has a light white bread aspect to it up front, with some of the aforementioned "off" note. That luckily dies away pretty well, with a little more or a light grassy and citrus note replacing it.

Taste starts with the bread, fairly light and pretty clean. As the beer goes over the tongue a lemon note comes in. This transforms slightly, and begins to border on a rotting citrus like taste (but doesn't get to olive juice). Fairly malty overall, a neutral to maybe the lightest dry grass bitterness keeps it a bit in check.

I could easily drink this if offered, but even ignoring the "off note," I'd say it's missing a little more bitterness in the back for my liking.

The slightly cloudy, pale golden body is topped with one finger of firm white foam. The head doesn't have great staying power and settles to a ring with thin lacing.

Decent strength aromas of corn, white grape and light floral hops are all mirrored in the taste with some grassy hop flavor as well. Moderate bitterness holds up through to the dry finish and the white grape opens up as the beer warms. The body is light to medium with a grainy texture and moderate carbonation that produces a bit of crisp bite.

Easy drinking and refreshing, I will enjoy more of these.

I'm not very experienced with this style but am liking it more and more. I'm probably not qualified to call it solid but other than maybe the appearance it seems well within the style guidelines.

Pours a pale straw. Lots a crackery malt that makes up a very strong backbone for this delightful pilsner. The hops provide a nice spicy, peppery layer of texture. Overall, a very nice and drinkable pilsner, as it should be.

A really well done Pilsner. Nice bready malts with equally balanced European hops. Grassy in aroma and taste. Really hits all the marks authentic pilsener lovers will like. Of course having a 2 week old pilsner fresh really helps as well.