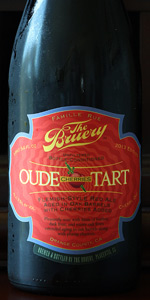 Notes: Oude Tart is a Flemish-Style Red Ale aged in red wine barrels for up to 18 months. This version has had cherries added for the final stages of barrel aging. It's pleasantly sour with hints of leather, tangy dark fruit, plump cherries and toasty oak. While the base beer is one of the more classic styles that we make, it's not a style that you can find too often in the United States. Originating in style from the Flanders region of Belgium, near the French border, this dark, sour ale has roots deep in brewing history and predates most of the ales that have become popular in contemporary culture. We're doing our best to keep the tradition alive by brewing and aging this beer here on the West Coast.
View: Beers | Place Reviews
Reviews: 101 | Ratings: 1,204 | Log in to view all ratings and sort
Reviews by Gatch:

Bottled 02/1/16 and consumed early August 2021. Pinnacle of the style in this country. Beautifully improved with cherries. A properly barrel aged sour with tons of character.

750mL bottle poured into a snifter.

(M)- A great carbonation level and balance. The cherries really bring on extra dimension to the base with that extra jammy sweetness.

(O)- I am already a big fan of the base beer, but the addition of cherries really adds an extra layer of complexity and dimension making this something really special.

this is wonderful beer, it really is, but im not sure how much the cherries really add to it. i mean, the original beer has a lot of tart cherry notes in it already, but remains balanced and rather true to the flemish red tradition. this edition actually has cherries in it, and while they get lost a bit in one of the most sour beers ive ever had, they give it a gritty sort of sweetness before the acid attack on the back end. deep ruby red in color with a ton of bubbles, no problems there. the nose is sour, but doesnt show nearly the intensity of it that is about to follow. the cherries add a nice layer to the smell, tart and familiar, but they come through a bit sweeter in the taste at first. nice sour red base on the first sip, but ive oude tart enough to know that its about to get gnarly. the sourness here is perhaps the most of any beer i have ever had, in fact im pretty sure it is, it almost hurts my jaw just smelling it. the flavors are awesome for the first few sips, and i get a nice earthiness that comes along with all the cherry, but after about half a glass i cant really taste it much anymore, certainly not as well, because my taste buds have been basically scorched off my tongue by all the acid. im not complaining, i like that, but i could never take down a bottle of this without help, it would turn my guts inside out for sure. the carbonation is high, which amplifies the sourness to even a higher degree. i love this beer, but i may like the base beer better than the cherry version. it just doesnt really need them.

Another enormous thanks to Beerenauslese for bringing this to the early January tasting at the Taproom. 2013 vintage. Poured out of a 750ml bottle into a tulip glass. Keep in mind that I have NOT had Oude Tart yet (although I do have a bottle), so I have nothing to compare this to.

From what I can gather, this is radically different in appearance from the Oude Tart due to the addition of cherries - far less brownish in appearance, and upholds a garnet, slight ruby red tinged color due to the fruit's skins. Contains a bone white head that lasts for a bit, let eventually gives up with minimal retention and no sticky foam to speak of. Glimmers a bit, and is a great tribute to the finest traditional fruit infused Lambics, but is pretty much on par to any average Flanders red that I've seen before.

The aroma, though... Holy crap. Ridiculously vinegar-y and acidic like nothing else - this one is simply not playing around here. Fleshy, tart cherry skins, sour cranberries, as well as newly riped currants, all meld with the acetic and minimally lactic acidity from the oak. At the back, there's a red vinaigrette flavor that nearly pierces the nostrils through and through, with some light notes of tobacco, almonds, and caramel at the back. It's a physically intense sensation on the nostrils (which I haven't experienced since something more rustic from Cantillon), but it's not the most balanced wild offering I've whiffed upon. It gets credit for its uniqueness, but it's definitely rather harsh in certain respects.

One sip, and my cheeks instantly puckered up. This is unbelievably ridiculous and I should have been aware into what I was getting myself into as soon as I evaluated this beer based off its aroma. *Extremely* sour red fruits, resembling under-ripe cherries, stems and pits and all, alongside sour pomegranates, cranberries, and green plums. Gets progressively more acidic in the middle of the mouth, with a red wine vinegar and green apple skin flavor, finishing off with intense sour oak notes that's slightly spicy but mostly astringent and intense. Some caramel and lactic sweetness at the finish. As it warms up, it does get a little bit more tolerable, creamier, and richer, with the fruit notes feeling more puréed and juicier, which is to its advantage. It's never thin, and contains enough of a solid malt and oak backbone that balances out the entire process. Not for beginners, but definitely too fascinating to ignore.

When I thought I had had I true sour beer from The Bruery... THIS comes along. What an intense, fruity, acetic monster of a beer. Definitely never had anything quite like it in the realm of American sour ales, and in spite of its over-the-top intensity, it's got a lot going for it and makes a good sipper throughout. It's not the most practical sour I've had, but the fruit characteristic, as well as the intense oak, is notable in its class. I don't know if I'll ever get to try other fruit infused sours from The Bruery, but I am glad I got to try this.

A-Brown in the glass, two finger off white head that lingers and tries to give some laving.

S-Mild cherries, brown ale base is there, some oak and leather.