Up, Up, & Away
2SP Brewing Company 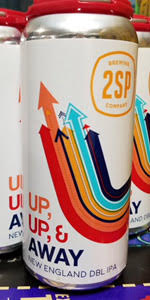 Tropical, grassy and even piney with some candied fruit, the aroma is certainly exciting. Some pungent notes as well that add something extra to this. Taste is a blend of all aromas, and while not as harmonious, still very good. Feel is light-medium carbonated. Overall, a great DNEIPA.

It poured out of a can, dark yellow with a bit of a head and left a bit of lace in the glass. There was a definite hop hit to the nose. There's enough requisite hop taste and bite to adequately fulfill the Double IPA self-description. There is also enough tasty malt backbone to make this a very pleasurable experience. It's a little more Double IPA than New England IPA; but labels aside, this is one fine beer.

Can to tulip.
The appearance was a mild semi-hazy burnt yellow to orange color with a mild transparency about it. A one finger white foamy head glided off delicately to leave some messy filmy lace.
The aroma had some bitter citrusy rind to subtle sweet rind tones in front with a subtle sweet grassy to super subtle piney note. Some peach sweetness came out with some warmth.
The flavor leaned towards the sweet side with some bitterness strolling in for a mild balance. Mellow aftertaste of citrusy bitterness.
The mouthfeel was about medium bodied with a fair sipping quality about it. Fair amount of bitterness with some peach skin tartness. Carbonation felt fine. Finishes with some bitter citrus rind.
Overall, I see it more of an American Imperial IPA worthy of more pours.

it's another winner from 2SP!!!! COD 030520. Kudos to my local beer dude at Bella Vista Beer Distributor.
L: beautiful orange yellow color with a nice head. minor ding for some pretty big floating chunks that made me look askance
S: maybe the best part. bright citrusy and sweet. really good!
T: lives up to the nose. there is a little bit of a bitter bit on the finish that seems out of place to me. but overall very nice
F: mouth feel is solid. not super rich
O: I like it!

Hazy peach color with a foamy bone white head, this beautiful beer has dankity dank citrus aromas from the Mosaic hops and an earthy, almost oniony component from the Simcoe hops.

The mouthfeel is on the firmer side for the style, which I prefer. This is a beer with gravitas, and bridges that “old school/new school IPA” spectrum really well. My first beer from these guys, I’m a fan.

A- A fairly hazy golden copper with a three finger white head.

Really nice mellow Hazy IPA. You know you like it hazy if you're reading this.

Taste: Almost like a very very light caramel/malty finish taste towards the end. This doesn't have the kick of a double IPA at all. Very easy on the carbonation and smooth to drink. That 8% ABV is really buried in there making this a beer with day-drinkability that'll leave you napping in 2 hours. You can taste the juice without it feeling too juicy. Honestly, a good beer to introduce your mom to IPA with only having her wince a little at the end.

Very solid. Can't wait to find it on draft.

A: The beer is very hazy to cloudy yellow in color. It poured with a short white head that quickly settled down, leaving a thin layer of bubbles covering the surface and lots of lacing down the sides of the glass.
S: Light aromas of mangos are present in the nose.
T: The taste follows the smell, starting off with flavors of mangos and finishing with notes of passionfruit and stone fruit. No bitterness is perceptible.
M: It feels light- to medium-bodied and a little juicy on the palate with a moderate amount of carbonation.
O: I wouldn't consider this beer to be as "juicy" on the mouthfeel compared to other beers in the style, but it was very tropical both in the smell and taste.

Haaaazy medium golden with a nice white head. Pineapple and citrus nose. Dank sweet non bitter flavor. Really well put together with the feel complimenting this brew. Really like the carbonation. But less than medium that works great.

Goes down smooth with a juicy taste however, has a very thin body especially for a double IPA. Alcohol is well hidden and the beer is very easy to drink.

Par for my goofy course - I was focused on beers from Sterling Pig (Media, PA) & 2SP (Aston, PA), initially thinking that they were in the same city! Aston is only six (6) miles from Media, which my have led to my CANfusion, but I spent the day alternating between the two. I am CANtinuing to run through my backlog of 2SP beers at this point as brewed by my old buddy, "Big" Bob Barrar of 2SP. Bob & I go WAY back, to when he was apprenticing under his brother-in-law, Jim CANcro, at Red Bell. "Big" Bob really is big, a giant of a man with a Russian Cossack-like black beard. He is like our Lt. Gov. Fetterman - security? Who needs security? I AM security! What happened to "Big" Bob after Red Bell quit ringing? He only went to work at Iron Hill (Media) where he became their most-medaled, especially at GABF, ever! Now, you know the rest of the story!

At last, I think that I am leaving Aston & Media behind! Things are never easy at The CANQuest (tm) & this is just another indiCANtion thereof.

I beCAN with a Crack! of the vent, followed by an inverted, C-Line Glug just to ChANge things up for this last 2SP CANned beer.

Are there alternatives? Sure! I have been shown by CANlectors how to CANduct a bottom-opening, but it is too much work for my taste. Plus, the value added is for the spent-CAN CANlectors with nothing for me. The guy who takes my spent empties is not picky about modern CANs so why should I bother? The only time that I really employ bottom-opening is when I am CANfronted with a 360-degree opening top CAN. Those are the worst!

Enough! Onward! My silliness made the head come roaring up to form two-plus fingers of dense, foamy, rocky, tawny head with great retention. I had to back down & off as it threatened to overflow the rim of the glass. Color was a deeply-hazy/lightly-cloudy Golden-Amber (SRM = > 5, < 7). Nose was REALLY fruity! OMFG. You had really better be into tropical fruits, including mango, papaya, guava, passionfruit & pineapple if you are planning to delve into this one. Me, not so much, but it beCANe an exercise in reviewing to style & not to taste, as a result. Mouthfeel was medium, I don't so much mind the tropical fruit flavors, but they tend not to produce the same bitterness of the beers that really got me interested in hoppy AIPAs in the first place. In this case, it was unrelenting, which may be fine for some, but was not really my bag. I must admit that it kind of grew on me, which is one of the few benefits to a Pint/Pounder CAN - lots of time to CANtemplate what I was drinking. Warming, it beCAN to lose some of that unrelenting sweetness, which was fine by me. Finish was semi-sweet, proving that you CAN't totally escape your roots. One was sufficient for me. YMMV.

16 oz can stamped 1/31/19 and I am drinking this less than two weeks later! Loving the freshness. Had heard about this beer in stores in Delaware that didn’t have it anymore. For anyone still looking they have it at Total Wine on Naamans Rd. I picked up a 4 pack and am enjoying the first one. Very impressed. Brilliant smell of flowers and citrus. Taste is some citrus and bitterness. A little warming finish reminds you that this is a DIPA. This is a warm complex beer. Not one to drink fast, but one to enjoy. Nice job by 2SP. Hope they Keep it coming.

Can dated 1/31/19 into pint glass. Pours a cloudy amber with a nice off-white head. Great lacing. Initial impression is pineapple, grapefruit, and mango with a subdued caramel backbone. Mouthfeel is juicy but not quite soft; carbonation is perfect. Finish is a ton of citrus with a slight lingering bitterness. Quite good - not the absolute best NEIPA around, but quite tasty.

16 oz can poured into an imperial nonic.

Overall
Great job on this! Incredible mouthfeel and tropical fruitiness.

This is the first beer I've tried from 2SP and I'm definitely a fan. It's a double IPA but doesn't have the heavy mouth feel that most DIPA's have, really smooth. It's extremely hoppy and leaves that dank aftertaste. Totally opaque & the color is Blue Moon-esque.