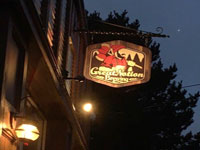 Reviewed by DanBrenda from Washington

We LOVE Portland and GN is our spot, but we prefer the Taproom more than Alberta. The Alberta location is fun, but often times the servers a little more full of themselves than they are about being good people. The Taproom is more chill and the servers are more real and less pompous.

The beer at Alberta is interesting. The rotation is OK and food is decent. Alberta does it's own thing, which is to say it is Portland for Portlander people that like a neighborhood brewpub.

The chef is a chef and not a some biker dude hired off the street that can only make tacos. The menu changes, but you have nice staples on the menu and bar food which everyone needs if you decide to drink heavily (easy to do at GN).

The vide is chill, tucked back into a neighborhood. The outdoor space is super chill with a food truck right outside, yard space under trees, a tent to chill in, they open up the doors (garage door too) and given the west coast weather, you can really enjoy the temps and chill peeps of Portland.

If you are headed to Portland, I would suggest Taproom over Alberta if you want good beer, good food and good people. We really love north Portland and have been disappointed too many times to give Alberta a good review.

4.17/5  rDev -5.4%
vibe: 4.25 | quality: 4 | service: 4.25 | selection: 4.25
Very chill vibe with mostly young-adults and into 40s crowd. The place has some character to it, which only adds to the good vibe. I sat at the bar with a couple of other guys and we were always asked if we needed anything, and water was continuously being refilled. Selection had a good mix of 'trendy' styles (NE IPAs, fruited sours and adjunct stouts) and an outlier or two of pilsner and such. Something for everyone.

Overall, I like the place and I would be happy to get back there when in Portland again.

Rated by oldmankoch from Tennessee

4.55/5  rDev +3.2%
vibe: 4.25 | quality: 4.75 | service: 4.25 | selection: 4.75
Dropped into their original location for a nightcap while on an Oregon road trip. I had heard all they hype, but wanted to see what was up. They absolutely loved up to it. Got to try a little bit of everything, from IPAs to sours to stouts, they were fantastic. Wish they had a little more available to take home, but with their demand I understand. That will probably change as their new facility ramps up production. I'm already trying to find excuses to go back.
Sep 04, 2019

Rated by SummitFox from Oregon

4.31/5  rDev -2.3%
vibe: 4.25 | quality: 4.25 | service: 4.25 | selection: 4.5 | food: 4.25
One of those places that HAS to be all hype, right? Nope! Great Notion is as legit as they come as long as you like dessert inspired stouts and sours or hazy/juicy IPA's.
Located in the Alberta area, it's a tiny bit off the beaten path if you're staying downtown. It's still only about a $10-15 Lyft/Uber away, though. When you arrive you'll notice it's tucked behind a coffee shop and it shares space with a garden center. Luckily it isn't tiny. There's an indoor dining room (where the brewing equipment and bar are located) as well as plenty of outdoor seating via a pair of patios. There's an additional garden center space that seems to be available as needed, too. It's a little bit biergarten-esque.
On to the beer! When I was there they had a pretty astounding 15 taps and a guest or two as well. About 1/2 are variations on hazy IPA's while the other half are split between kettle sours and big stouts. The sours and stouts were almost all featuring dessert adjuncts like coffee, blueberries, lime, maple syrup, peanut butter, and more. Most of the hazy IPA's were simply featuring different hops and strength levels. I don't think anything I had was less than terrific. Blueberry Muffin, Wai-Iti, Juice Jr. and Peanut Brother were highlights. If you can imagine Funky Buddha crossed with Trillium, you're most of the way there. As long as you aren't rolling in expecting a Munich-level dunkel or a SNPA clone I think you'll be more than happy. Prices are low compared to what you'd pay in most of the country. All pours are either $5 or $6. Pour sizes range from around 11oz all the way up to standard pints. However the real gem is the price of a flight. It's $15 for 5 samples, any beers you want. Samples are listed as 4oz each, but I'd say that's a very conservative estimate. They're probably closer to >5oz. and that $3 per sample size applies to everything they have.
Something that also surprised me - the food is also really good. Meal options are mostly sandwiches and salads, but where they shine is the snack menu. Curry-ketchup waffle fries, buffalo tostones, and pan fried Brussels sprouts are some examples. Oh man they're delicious, too. Prices are on par with everything else I encountered in PDX. I appreciate that pretty much every brewery in town has food, but GN's was the best I had. I'd probably feel comfortable simply eating there without even getting a beer.
They have beer to go, but only select items in crowlers and 4-packs. Neither option suited me when I was there, but I guess when they do Juice Box and Double Stack people are known to swarm. I appreciate that their main focus is making sure as many options are on tap as possible for visitors. I wish every place did that. Most of the to-go stuff is just going to be swapped around until it turns to mush anyway.
Overall, I couldn't have been happier with GN. They know what they're doing and they do it well. On both the beer and food front. The staff is super nice, too. If you're in the area, it's a must visit.

3.63/5  rDev -17.7%
vibe: 4.5 | quality: 3.5 | service: 4 | selection: 3
Dug it more as a place (of a piece with garden-y craftsman Alberta) than as a source of beer. Very much the kind of populist, presentist approach I see from more and more new outfits across the country: Sweet-Tart-thin fruited kettle sours; creamy New England IPAs; big stouts that sit in your stomach. Being more of a horseblankety farmhouse boy this all makes me long for a dirty brett beer, or a grisette or, hell, a Weihenstephaner.
May 25, 2018

Reviewed by Kiki1414 from Oregon

1.35/5  rDev -69.4%
vibe: 1 | quality: 1 | service: 1 | selection: 2 | food: 2
My friend and I were sitting outside at one of the tables having lunch and beers. There were several tables with dogs, kids were enjoying themselves, it was a great afternoon. Then we had family (parents and a toddler) sit down at the table behind us. All was fine for a while. Then the toddler started grabbing the gravel and throwing it in the air, which caused dust to travel throughout the entire patio area. The parents didn't seem to notice or care. Depending on how the wind was blowing, someone would look around for the source of the dust blowing (likely into their beers). After this went on for a half an hour my friend eventually asked the mother if she could ask her son not to throw the gravel. That is ALL she said. The mother got very upset and both her and her husband were yelling for the servers to "come take the toys away because we apparently didn't like kids and didn't want their son to play with them". The father then went around to each table asking them if their kid was bothering them, because he was "bothering us" (these are all his words). He then walked by our table and said that we had called them a**holes. We both said "we never called you or your wife an a**hole, all we did was ask that your son not throw the gravel". He then went and put all of the toys away, all the while muttering things about us, and when he came back by our table he said "I wish you would stop talking about us". We were both shocked and had literally said nothing while he was making this scene After he sat back down at the table both he and his wife called us b*tches. We didn't say a word to them.

The manager, Sasha, went over to the family's table, and I'm not sure what they told her, but she was apologizing and offered them free t-shirts. She walked right by our table, so my friend motioned her to come over to our table. She was EXTREMELY rude and completely disregarded us. She wouldn't even listen to what we had to say. We tried to explain that we had been there for a while and several tables of children had cycled through, that it wasn't an issue of us not wanting kids there. She then accused us of harassing the couple. When we told her that they were in fact the ones harassing US and had called us names, she continued to belittle us and yell in our faces. It was clear that we were not going to be able to have a productive conversation with her because she was belligerent. When I finally took my phone out to record all of this, Sasha (the manager) shoved her menu into my face, said that I was immature and walked away.

I think it's great when establishments embrace families. I just don't like dirt in my beer. I don't think I'm alone in expecting parents to let their kids have fun as long as it's not disrupting other patrons.

It was, frankly, embarrassing to watch and I wish that I would have been quicker to record the entire scene.

Rated by dipso123 from Oregon

Reviewed by chrisjws from California

The Double Stack Blew my mind, the Blueberry Pancake blew it again. The beers here are off the hook. A must visit in Portland.

Reviewed by MFMB from Idaho

4.11/5  rDev -6.8%
vibe: 4.25 | quality: 4.25 | service: 3.75 | selection: 4.25
Stoked I finally made it here. Beer was killer and the vibe was great. Didn’t have food but I’m sure it’s great too. Service was good, it was busy so there wasn’t many chances to interact with beer tenders and what not and that’s okay. Fair amount of regulars in there tho I sensed that the beer tenders did focus on when they had the time. I love the beer and will be going back next time I am in Portland.
Jan 21, 2018
Rated: 4.19 by wisegreensoul from Idaho