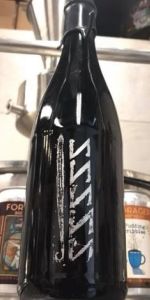 Notes: Nillerzzz is our barrel aged vanilla bean double stout. Fermented in stainless before aging in rye whiskey and bourbon barrels for 15 months. Our extended aging process fosters a warming spirit character, rich malt layers, oaky vanillin , and a thick luscious mouthfeel. We condition the blend on freshly scraped vanilla bean caviar from five different growing regions. Blended to drink now with your most adventurous friends and family members. Vintage 2019 Blend #2 differs from Vintage 2018 Blend #1 as it is a bit richer and has a distinct rye barrel character blended with a sweetness from the bourbon barrels. The body is thicker and more viscous with a more restrained fusel alcohol character. The vanilla beans in blend #2 are from Madagascar, Uganda, Tahiti, Tonga and Papua New Guinea.
View: Beers | Place Reviews
Reviews: 12 | Ratings: 79 | Log in to view all ratings and sort

Viscous oily black with a burnt tan collar that dies off to a motor oil surface in no time.

Super thick and sweet, right away this reminds me very much of Dark Lord, which I just so happened to have had right before this. We also had OG 2010 nilla, VR, and 2018 BCBS Vanilla right before this, so the contrasts and comparisons are all the more readily available. There's a little heat, and an almost maple sweetness, as notes of dark chocolate chip cookie and marshmallow fluff emerge mid-palate.

But in the end, I wanted to like it more than I did. Being self-aware enough to recognize that, it's not as good as it's been made out to be.

Sampled the 2019 blend (batch 2) at the Forager release. This beer is amazing. It made sleeping in a lawn chair in 45 degree weather overnight worth it.

L: Black tar, no head, doesn't cling to the glass long as something like an Assassin.
S: Vanilla dominates, dark chocolate and light barrel. This beer tastes more like real vanilla beans than marshmallows like a Handjee. The aftertaste goes on and on and you keep getting the different beans.
T: Tons of vanilla, chocolate, light barrel.
F: If this beer was thicker it would be a perfect 5 across the board. The brewer said that they didn't add any malto or other sugars to their beer so this is why it's not as thick as a Dark Lord or Henna.
O: Outstanding. One of the best.

6oz pour at the brewery. pours a dark, shiny black with mocha head. smells of chocolate, sweet vanilla and bourbon. taste is decadent vanilla with bourbon and chocolate in the background. as it warms the vanilla becomes even more pronounced and rich. feel is full, lower carb. certainly not the thickest stout i’ve ever had but certainly not thin either. overall, pretty impressive beer. doesn’t short on barrel character nor barrel character and drinks incredibly smooth and easy for a high ABV stout.

Batch #1: So much vanilla bean... but, possibly served too cold. This tasted a bit muddled. I had a pour on my way home from the Assassin 2018 release - perhaps I was just tremendously hungover (definitely). I didn't pick up much barrel, and left slightly disappointed.

Batch #2: There was a surprise pre-release of this beer at a local bar - I was a bit floored, honestly, because it's so much better than batch #1. The vanilla is much more distinct and well-defined, and it's just smooth as you might possibly hope for. Barrel is still not all that easy to pick up, but honestly, that's not such a big deal to me. I like a light barrel presence.

This beer is worth the hype. I'm almost okay with the 15 hours I spent in line to get a bottle.

750ml waxed bottle. Snifter glass. Dark black body, oily legs, one finger mocha head, good retention. Big whiskey presence; slightly smoky bourbon and spicy rye combine with a big milk chocolate and cocoa presence on the base stout providing a nice sweetness. Earthy hops and oak rounds things out. The whiskey is heavy on this one, befitting the extended aging time, and the complexity is very nice. The vanilla seems conspicuously absent, and I think it is covered up by the barrels a fair amount. I don't get that marshmallowy mouthfeel that I was hoping for. That being said, it's a nice big stout with a ton of barrel without it being overwhelming- the base stout holds up well to the extended barrel-aging time, however the vanilla is lacking on this one. If you are looking for the likes of BCBVS/VR or BVDL where you are drinking liquid marshmallows, you'll be a bit disappointed even though the beer itself is still a very excellent barrel aged stout. Judging from all the other reviews, perhaps the vanilla is less prevalent in the bottled edition than it was on draft. I'll never know.

Everyone said that this has the nose and taste of Goose Vanilla rye. I’ve never had that, but it had loads of vanilla with a nice rye spice. A little hot, but I thought that was a compliment to everything else that was going on. The group agreed that with 6 months on it, this will be even better.

The first time it touched my lips, I thought I was drinking Assassin. It's got all the vanilla you'd expect but the real story is what they've done to the base stout. They use some kind of barrels that are smaller than your normal Heaven Hill type. Like they come from a small craft distillery somewhere. This was my first time at Forager so I know very little about them. What I DO know is that Nillerzzzz is "Next Level" stuff!!! It's quite obvious they spared no expense in the making of this beer. I'll have more to say after I open a bottle. So far I've only had tap pours of it. But I did want to record my rating now. 5/5 for sure!

a beer of astounding depth of flavor, and another hit from forager in this adjunct imperial stout or porter category, wow, they are positively killing it with this kind of thing. this is a huge stout, aged in both bourbon and rye barrels from what i understand, and then conditioned on vanilla beans from five different parts of the world. sometimes efforts like this seem like a lot of work for little gain, but anyone can make a beer thats say a 9 out of 10 in a style like this just by having a little know how and a good attention to detail and some knowledge of the ingredients, but to make something that is truly off the charts and this distinguished, especially in a style that everyone is making these days, it takes this kind of idea and effort (not to mention the likely expense!). i am lucky to have had this. its got more vanilla to it than almost any other beer i can ever recall, but rather than being sugary and forced, its this unbelievable vanilla richness and saturation, so natural somehow, like opening up and scraping out the beans from the pods, its absolute essence! the bourbon adds some maple and honey sweetness and some woodiness, all of which love and enhance the vanilla. the rye adds a little spice and texture to give depth and balance, smart call to use both kinds of whiskey barrels here. its all in service of this crazy vanilla complexion, i wish i knew more about the different beans and where they come from and how thats relevant in the beer, but all i can do is stand back and appreciate this one, vanilla like i have never known in any beer, and it makes some of those absurd ones from the likes of prairie and the bruery seem pathetic, no joke! boozy and fancy, this is some special liquid!

L: pitch black with a ring of head
S: big boozy barrel and big vanilla to compliment it.
T: just like the nose, a good back and forth between barrel and vanilla.
F: highly carbonated, lots of tingly bubbles, medium thickness and good coating on my teeth.

Nillerzzzzz from Forager Brewing Company
Beer rating: 98 out of 100 with 79 ratings