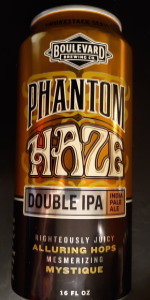 Inspired by the luminous glow of stunning sunsets and the enigmatic aura of transient twilight, this supernaturally delicious beer is big, bold and beautifully balanced, bursting with luscious tropical hop flavors.

Poured from a can into a tulip.

The brew's flavors match the nose. Caramel malts on the tip of the tongue, Then a fruit and resin melange follows. Lemon, grapefruit, mango, apricot, peach, pine, hints of warming alcohol. The flavors are present but somewhat blurred and muddled.

The brew is just beyond medium bodied, but doesn't feel that way at the time. Well carbonated with a drying finish.

Boulevard is a favorite, but this isn't a world-beater. This is an above average, but not striking brew. It straddles the line between an NEIPA and DIPA,, and probably would have been better if it was one or the other. The flavors end up somewhat muddled and sweet, and it needed a bit more carbonation.

16oz can. Poured out a hazy, golden orange color with a small, off-white head of foam. It smelled of pineapple, orange and grapefruit. Lots of tropical fruitiness with sweet caramel and a bitter finish.

Best by 5/31/20. 16oz can poured into a tulip. Pours a hazy golden, but it's not cloudy or murky. Small white head that fades leaving solid retention and lacing. The aromas are citrus forward along with some hints of tropical fruits. Lots of fresh bread and crackers. Mild hints of caramel. Malts are there. The flavors basically follow the nose. Some orange and grapefruit along with some hints of lemon and pineapple. Lots of fresh grass. More bread and crackers. Subtle sweetness. Low bitterness. Finishes juicy and dry, but it's more on the juicier side. Alcohol goes unnoticed. Mouthfeel is on the fuller side of medium-bodied with moderate to active carbonation. It's sharp, thick, fluffy and smooth.

This is an alright IPA. I wouldn't really consider this a Double IPA even though that's what they call it. There's some "haze" characteristics, but it's definitely not a "New England IPA", for what it's worth. I've usually liked Boulevard's hoppy beers, but I'm personally not crazy about this one. It's not bad or anything, but it's not too bold for a Double IPA.

Canned Dec 2019 - Exp 8 May 2020 (did someone say 6 months?)
Pours caramel color, with a boatload of quickly settling particulates. Very tiny head, teeny tiny lacing 1 minute after pour. Smell fairly bland, malts and tropical at best. Taste is a bit better. Mild coconut/pineapple, lemon. A tad heavier on the malts, but not overbearing. Minimal bitterness. MF is light, not watery.. but doesn't get to medium. Light carbonation.

Not a bad representation of an IPA, but the "haze" is a buzzword in this case. It's more like "cloudy, with settling haze". I call it misnomer branding, meant to sell. I fell for it. Also, for a 7.5%, it's pretty lame.