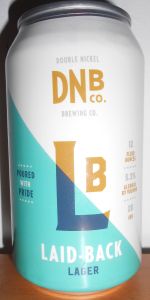 3.3/5  rDev -6.3%
look: 4.5 | smell: 2.5 | taste: 3.5 | feel: 4.25 | overall: 3
Looks golden yellow with a nice white foamy head. Smells extremely neutral. Faint grassy smell. Taste is not quite what I was expecting. It does not use traditional German hops, whatever they used gives it a melon,berry flavor. Not really digging it. The fruitiness is distracting. Feels like a traditional lager, clean,crisp,smooth. The reason why I have basically switched from IPA's to lager and Pilsner, is I am getting sick of every type of beer now being a fruit bomb(stouts included) Overall I will not purchase again. I feel like they took a good idea and screwed it up (my opinion) . I think a lot of start up b rewers don't make traditional German Helles is because from what I understand the hops are very difficult to get .The real primo German hops are already spoken for years in advance.
May 18, 2018

Notes via stream of consciousness: I like the label but unfortunately there are a few other brands on the market right now that look similar. And it doesn't look like their other packaging. Still, I was able to find it. I almost missed their specialty beer though, forget the name. Anyway, it's poured a massive head of bright white over a fairly hazy yellow gold body. Plumes of tiny bubbles can be seen rising upwards, bolstering the rocky head. Seeing as how I don't mind haze it's a great looking glass of beer, and I think leaving it unfiltered is a good trade-off for fuller flavor. Hopefully the lacing will be as good as the head retention which is excellent. Very impressive. OK, moving on, the aroma is fruity over a lightly sweet and grainy malt base, and there's some yeast as well. It's fresh and bright and welcoming. The flavor follows and the fruit is interesting but not particularly clear. I find some apple, soft pear, light dried apricot, a suggestion of lemon, and melon - which I only got because it's mentioned on the label, had it not been there I would have probably just called it "tropical". Ahh! The lacing is good! I've got a solid wall of thin lace that shows thicker rings where I've taken a sip. That's nice. So, back to the flavor, there's not a lot of bitterness there but it remains balanced. What did the can say? 20 IBUs, yeah, that's about right, just enough to balance it out so that there's a little bit of bitterness in the finish while still retaining some sweetness from the malt. The fruitiness, and some of the yeast flavor, carry through into the finish and then linger shortly. There's some mild grassiness as well. As odd as it might sound, I think I would like to try this beer filtered though, just to see what it would do to it. I think it might clean it up a bit as that yeast is somewhat distracting from the malt and hops. There's no melon in there, is there? It must be hops, but as I've progressed I've found even more of the melon flavor, which is nice. So is this a spring or summer seasonal? Ah, it doesn't really matter as it fits both, but I can easily see this as more of a summer beer. Or perhaps the packaging design is influencing me as it seems a bit nautical, but maybe it's the melon as well. Laid back? Yep, it's easy drinking and relaxing. Light-medium in body and gently crisp then smooth. Nicely done.

Reviewed by justintcoons from Pennsylvania

Smell: grass and lemon zest were easy to detect.

Overall: a really tasty lager that was simple but very enjoyable.

Taste opens sweet, with a bit of apple/pear blossom fruitiness. Clean flavor profile has a neutral balancing bitterness take hold fairly quickly. Ending has a light grassy bitterness just getting the edge on the by then more grainy malts.

A recognizable profile, leaning a little sweet. Would like it a little drier.