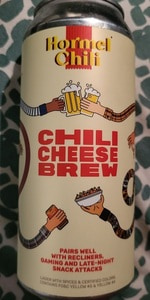 On the pour a nice big, white, doming head reminiscent of a German lager forms up to 2.5 fingers over a few minutes it recedes to a rocky cap, leaving lacing. Body is a hazy solid golden yellow with a few particles.

Aroma is definitely Chili Cheese. Canned meat product/jerky and nacho cheese come through big on the aroma. Sortof reminds me of a premixed michelada. Almost a comedic aroma. It's not bad, but I'm also someone who says McDonalds isn't bad so take it as you will.

Flavor is more mild than the aroma suggests, but it is still definitely a "Chili Cheese Brew". The corn chip base they advertise is there, but it comes off as simply a corny adjunct lager with some extra adjunct flavorings (and apparently yellow food coloring) added. Not bad, but not the best beer in the world. For a novelty however the quality is surprisingly high. A lingering Chipotle smoky flavor stays in the back which is actually pleasant.

Feel is a bit heavy due to the implication your brain assumes due to the meaty aroma. It makes it not a chugging beer, but more of a conversation starter amd novelty that you could actually drink. The mouthfeel itself is full and at first has a slickness but it is quickly replaced by a standard full flavor lager mouthfeel with a bit of extra thickness. An almost spicy feeling begins in the throat although that may just be heart burn.

Overall not a bad novelty, but definitely overpriced with shipping. Not something I'd consistently reach for by any means, but also definitely not a drain pour. Still definitely a beer as well. It is what they said it would be even though I had no idea what it would really be of that makes sense.

Reviewed by TerribleBeer from Minnesota

Look
It looks like a nice clean lager, light straw and clear.

Aroma
Spiced with the makings of a chili, light aromas of chilis, cumin, garlic, herbs, and a touch of cheese

Taste
Follows the aroma with an added corn-like crisp of a clean lager.

Do I like the beer, hard to say, but does it deliver on what it's advertised to be? Yeah, it actually does and I'm not mad about it. I won't be drinking a lot of it, but I'm glad I tried it. Nice work.