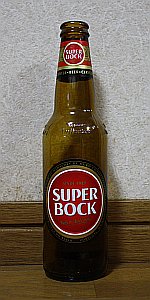 I bought this beer for the bottle cap - I have extra cut-outs on my bottle cap map of the US and added Portugal to the mix. No expectations for an Adjunct lager, but this beer wasn't bad!!! Pours a clear gold color with a fizzy medium size white head. About average retention after the head quickly fades to half it's original size. Thin bands of lacing on the glass. Aroma and taste are pretty mild, a bit malty, some grassy hops and seems to be missing the bad corn and rice taste found in so many American adjunct lagers. Mouthfeel is a bit thin and watery but it is crisp, with no nasty aftertaste. Not a bad lawnmower beer!!!

Bought at a grocery store in Getxo (Spain).

Poured from a bottle into a pint glass
Appearance – The beer pours a clear deep amber color with a one finger head of puffy white foam. The head has a decent level of retention, fading over time to leave just a trace of foamy lace on the sides of the glass.
Smell – The aroma of the brew is a mix of a grainy smell mixed with a bit of a mustiness and some light fruits. Along with these aromas comes notes of a caramel sweetness as well as a touch of skunk.
Taste – The taste begins with a caramel and grain flavor mixed with some light herbal and musty tastes. As the taste moves forward the grain grows a bit more intense, all while the caramel fades a touch. At the same time some papery tastes as well as a bit of a dirt like flavor comes to the tongue, leaving one with a somewhat crisp and grainy, but little bit off taste to linger on the tongue.
Mouthfeel – The body of the brew is slightly lighter with a carbonation level that is rather average. For the style, the feel is very appropriate and makes it an easy drinking brew.
Overall – Ah. Not really the best out there, but in no way offensive or awful. Just sorta ahh.

No visible bottle or import date.

Appearance: The beer has near crystal clarity. It has a brilliant gold colored body with a fluffy white head. Very good retention and lacing.

Aroma: There is a faint skunky aroma and a note of cereal grains. A slightly spicy, noble hop aroma surfaces and dominates the nose just over the cereal grain scent.

Taste: Up front there is a light spicy hop flavor with a light bit of sweet caramel character, mixed in with sweet corn. The flavor profile is consistent throughout drinking, and it has just a hint of bitter root at the back end.

Mouthfeel: It is light bodied and easy to drink. Carbonation feels good.

Overall: It is an easy drinking beer that is flavorful and a bit sweet. The label states "SUPER BOCK" but the beer is closer to a lighter Vienna Lager. I could drink it again but I would recommend it if you can get it fresh. As an import it is decent but there is a light skunkiness to the aroma which can be off-putting.

Let's start by saying super bock is not a bock type of beer. It's a pale lager that name bock, super bock to be exact. Look wise is weak with little or almost non existence of carbonation. Smell like a normal lager and the taste wise is weird that finishes with a bit of metal taste at the end. Overall it feels like a lager that I could do with if there is no more other choices in the coolbox

The smell is pretty odd — not to say metallic — and the same goes for the taste.
It's my first Portuguese beer and I'm disappointed; definitively not great delight to drink...

Heavier than a “light” beer , not bad at all

Smells of toasted grain and a bit of caramel. Slightly grassy hop. Doesn't smell like much.

Starts out tasting of caramel and toasted grain. No real bitterness. Grassy hop.

Overall it is OK, Not something I would seek out though.

There is no date on the bottle. The pour is golden yellow with little carbonation in the pilsner glass. I have to agree with some of the reviewers on this page about the beer tasting off putting. In addition to, i'm getting malted barley, grass, & I agree with it tasting watery. Well, at least now I can say that I've had a beer from a Portugal brewer. Cheers! C

A very light amber colored beer with little head and minimal odor. Style reminds me of a mass marketed American lager beer. I could drink this on hot summer days but will not purchase again since it lacks character.

This has an odd taste, cant tell if its cough medicine or chemical. The rest of the factors ,arona,smell,feel ,aren't great either but the taste is really off putting

So, I'm reviewing this beer (scorewise) as a Lager, which is the style listed here. That said, this has Bock elements, but....well it's not a Bock.

Appearance: Golden yellow that has a slight touch of bronze as it's cast away from the light. Produced a finger and a half of head that immediately evapourated. Body is clear with steady slow carbonation. This alone pretty much cements that this is not a Bock, and if it was, it would be the lightest Bock of all time.

Smell: Well it does get this a bit right, as toffee malt is the dominate note, but it's battling a bit of a mixture of wet grass and straw. It's like the lager wants to overcome the Bock-like malt, but can't quite do it. That wet note also could be a slight touch of skunk. Touch of earth as well. Warming doesn't help its case much.

Taste: Starts with a very weak caramel malt that then gets overrun by straw, corn and a slight earth touch. It's like taking the mask off a scooby doo villian here. "Let's see who this Bock really is! (GASP) Old man macro lager!" That said...it's not bad in that regard, it just doesn't work with the initial flavour.

Mouthfeel: The transitioning here is awful, because it takes that right turn on the malt, completely needlessly. If you were going to do it, I would presume you end with sweet, not start with it, but whatever. Aftertaste is an inoffensive mild straw and earth note. Carbonation also doesn't seem quite right either, as it dies down half way through the beer and only helps the straw portion.

Drinkability: It's refreshing and light bodied, I'll give it that but because it has that sweet note at the start, it kind of disqualifies itself from the guzzler category of lager. Still it's somewhat crisp and I think I can see one instance where this would be good.

Final Thoughts: I've been to a Portuguese restaurant once before, and it tends to be fish, but not shell fish dominant. This beer I can see going well with mild fish and that tomato rice they serve. That's really it, and at a restaurant like that, I'd be more inclined towards wine. I guess that's why it is the way it is. A Super Bock though this is not, it's passable lager.

On tap. Clear golden color with white head. Smells of grain and grassy hops. Medium feel. Moderate malty sweetness with some grassy hops. An average AAL, refreshing in the heat or with food but unremarkable on its own.

L- Pale amber, clear, 3mm white head, clears to lacing.
S- A strong waft of ''erb' on opening it. Up close I get the same, and not much else.
T- Quite punchy if unexciting. Hard to pin down quite what the flavour is hinged on.
F- Feels like it has a decent body for a lager, but it lacks distinctive character.
O- I haven't had this for about 35 years when I bought a discount case of it in East London, and carrying that huge beast home on my shoulder one night walking through Aldgate East tube concourse, the end of the case opened and about 20 of the 24 bottles cascaded out and smashed on the ground, like bombs out of a bomb-bay, before I knew what was happening. - It's ok, typical of a beer from an often hot-weather countryr, though with a bit of guts, but not much too much flavour when in such heat refreshment is the priority.
330ml bottle. BB: 12/2019. Bought from a convenience shop in London W2.

Pours a clear straw yellow color with a small top off white head that dissolves quickly.
Aroma is of some grains, cooked veggies and some grass. Taste is sweet with some low bitterness, and some very weak malt in the back. No aftertaste to speak of at all and watery flavour.
Pretty bad example of a lager.

Served in a weizen glass.

Taste: Corn and floral taste consists of hops and malt. Bitter and touch sweet all at once.

Super Bock from Unicer União Cervejeira S.A.
Beer rating: 67 out of 100 with 451 ratings