The In Crowd
Interboro Spirits and Ales 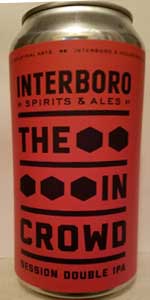 Picked this up a while ago, as the date on the bottom of the can 5/8 of last year with "INSIDE JOKE" written above it. If there was any joke about this beer, it was that this collab with Industrial Arts felt much stronger than it actually was, since it was close to being a session beer. Easy to drink and with just enough flavor and body, this was a good change from heavier brews that tend to do me in during my times drinking!

Not a bad pour to this as the beer was golden, shiny, and topped off with plenty of head; although the latter was probably because I let this sit for too long! A thin coating of lacing remained on the back of my pint glass as I worked my way through this. A moderate lemon and citrus aroma could be detected here with both of those coming out in the taste. Full of pith and rind, there was a bit of a heavier taste to this to go along with some spicy and peppery notes that emerged as this warmed up. Some ripe stone fruit came through as well along with an underlying dankness that ensure that this wouldn't last in my glass for very long.

Not a lot of booze here and the carbonation and body were on the light side as well. Not a bad beer and had it been a bit lower in alcoholic content, this would have been a perfect session brew. Still don't know what the inside joke with this is!

This a collaboration with Industrail Arts Brewing co.

Tall can, it looks like there was a canning date on the bottom but it has been smudged off...oh well, they tried

Ripe fruit and light lemon notes on the sniff.


The In Crowd from Interboro Spirits and Ales
Beer rating: 88 out of 100 with 18 ratings