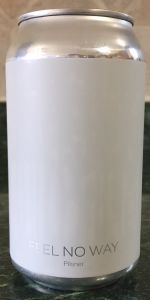 Drank from a 16 fluid ounces can purchased at Craft Beer Cellar, Belmont, MA
Served in a Willi Becher

The beer poured a brilliantly clear, pale golden hue when decanted and later turned a hazy, straw yellow color when the yeast was poured in. A fluffy, inch-tall, bright white crown topped the liquid and dropped to a lasting, soapy looking collar. Impressive lacing. A thin blanket coated the back portion of the glass and multiple streaks stuck along the front.

The nose was outstanding. Really crisp and bright. Lemon notes came through big time. Some lime peel as well. There was a dry, powdery yeasty quality that dissipated as the head receded. Crackery malt notes were also apparent. Nice grassy hop character. Touch of fruity hops too.

The flavor profile was very similar to the nose and just as impressive. Big lemon-lime presence up front. Pleasantly tart. Lots of fresh hay too. Grassy hops appeared as the beer moved along the palate. The hops turned more spicy and peppery on the back end and the finish. There was a subtle, lingering hop bitterness after the swallow.

Decanted, Feel No Way drinks like a clean and bright German pils, but with the yeast poured in, this beer is more akin to a full-bodied, hop-forward Kellerbier. If there ever was a pilsner designed for your typical hazeboi, this would be it.

Taste brings fair pilsner malt, light straw and bread dough, with a grainy cereal note, hops ramp up and dominate quickly, med bitterness, with herbal spicy flavor, then increasing again on the crisp spicy hop finish that ends med-high bitterness, a little fruity in the middle as well and a strange tangy character

Overall not that great, seems a lot more like a Kellerbier than pilsner, with the haze, the random fruity characters, the overall malt being a bit light, the bitterness on the finish also ramps a bit too much but probably due to lack of malt support. It's not a terrible beer, but definitely some flaws, and no idea on the age.

draught
A tiny bit cloudy, light golden straw color. Slightly tart, floral and a bit spicy, on the nose, with a bit of funk, to the aroma. A touch bitter at first, then a slight grassy, spiced flavor comes out, though the bitterness persists.

Moderately hazy body with a nice, fluffy, lace-producing head. Nose is herbal and grassy, with aspects of grain. Unfortunately, to me, the grain isn't showing as bready in any fashion. There's also a little bit of a pungent note that evokes wet grass a day after being cut.

The taste initially reminds me a little bit of a local Pilsner, Sunnyside Dweller. The bitterness in Hudson Valley's beer is a notch or two higher. A soft water feel along with the drawn out bitterness seem to run a little contrary to the cleaner feel of many pilsners. Dirt and hay open the flavors, with a grassy, lightly vegetal bitterness rolling in pretty soon after. There's a bit of of a musty farm house vibe in there as well. Lingering chlorophyll notes draw out the bitterness. With a little time on the cans, the notes turn a little sulphuric.

I think overall, this is running a little bit out-of-balance to the bitter end, especially with the part that lingers. The dryness is refreshing, and I think a cleaner cutoff of the hop notes would make this beer a bit more enjoyable overall.

Pours a pale straw. It is translucent, so it looks like it is well lagered. Floral and zesty on the nose. Possibly even tropical - like a starfruit or something. Very intriguing. It is soft with a touch of mandarin on the front end that evolves into a dry pithy lime peel, alongside a touch of lime. It is very floral. It is supremely soft for a pilsner. The carb feels similar to a NEIPA and as a result, it feels like a pilsner made by a NEIPA maker. It's not bad, but it lacks some of the snap that carb provides. It's lacks some of the crispness. The softness lends for that hop character to be more prominent and, for me at least, this is a negative. This isn't bad, but it is missing some of the key elements that I look for in a German Pils.

Can. Pours out a brilliantly clear yellow color. Thin head that has popped away to a ring of lacing, like a white crown. Softer nose but it's pleasant. Floral hops, grass, sweet crackers. Flavor is about the same. The hoppiness turns toward bitterness on the tail end. High drinkability still but the bitterness is a little too much to gain very high marks. Solid Pils.

Poured from a 16 oz can into a Zywiec tulip

T.F: Just like it smells. Grains and a bit of light malty sweetness. Lemon/rind, peppercorns, and herbal notes. Some nice hop bitterness... light bodied. Crisp and clean. A mix of lemongrass and spice to finish.

O: A very well executed Pilsner. Super easy drinking... clean and delicious. Should be rated higher for the style.

A: The beer is slightly hazy yellow in color and has a moderate to high amount of visible carbonation. It poured with a finger high bright white head that died down, leaving lots of lacing down the sides of the glass and a short head covering the surface.
S: Light to moderate aromas of white grapes and herbal are present in the nose along with hints of herbs.
T: The taste follows the smell, except that the flavors of herbs are a bit stronger.
M: It feels medium-bodied and a bit clean on the palate with a moderate amount of carbonation.
O: I found this pilsner to be very hop forward.

It a smells florally with a distinct lemon, light grains, and a hint of sulfur.

Crisp and highly carbonated up front and all the way through, although there’s a touch of creaminess. That lemon drop is there with lots of floral flavor with some almost gin like qualities and the bitterness rules. Especially in the dry finish. A bit of mineral aftertaste as well.

I’m far from an expert, especially when it comes to deciphering the differences between a German, Bohemian, and Czech style pilsner, but I think it’s unarguable that it lacks in clarity regardless of the style. This strikes me as what it is listed as otherwise. An American made German pils. While it should swing in favor of bitterness vs sweetness, this one is probably a hair too bitter. That doesn’t mean it isn’t enjoyable though.

A- Can into a narrow weizen glass with a clear medium golden body and a one inch thick foamy cap. Great head retention and lacing forms with huge thick webs of lacing on just about the entire glass.

S- Floral, grassy and herbal hops make up most of the aroma. Hints of grainy malt, crackers and a touch of fruit.

T- A hoppy pilsner with floral, herbal, grassy and fruity (berry) hops leading the way. The malts are a bit more towards the back as the hops take over here. Raw barley graininess, cracker, slight bread and sweet hints.

MF- Like their lager this one is very soft and rather silky. Smooth creamy texture and a medium level of the bubbles. Ends with an herbal bitterness.

A good pilsner but a bit too on the floral and herbal side as the grains get somewhat lost on the taste buds. Clean and well brewed but the balances is slightly off.

pours a lightly hazy straw gold with small white head. Aromas and flavor are crackers, toast, lemon, grains. Really a crisp clean beer that is made for the outdoors on a hot summer day. Doesn't weigh you down at all.

This one pours a brilliantly clear light straw yellow, with a small head and lots of lacing.

This smells lightly grassy and floral, with crackery malt, sulfur and fruity yeast.

This is a little too sulfury, but it still tastes nice. The hop character is spot on, with fresh cut grass and flowers, and a crisp biscuity malt backbone.

This is super crisp, clean, and awesomely drinkable, with a good level of carbonation.

This has some slight flaws, but it's overall very good anyway.

OK so I've had more than a couple of these and I've formed an opinion. Picked this up in a six pack of 12 ounce cans which has become sort of a rarity circa 2018. Pours a little hazy, definitely moreso than most beers of this style but not a dirty beer at all. 1 finger of foam, rapid dissipation. The nose is nice, pretty much representative of the style. Maybe a little fruity, but clean clean clean. Very easy beer to drink at 5% abv, a little watery but I'm getting some white grape on the back palate. As easy to drink as Spaten Pils Lager, but greater complexity and it gives you more to both taste and think about than something you may pick up in a supermarket.

Very very soft beer and something anyone could drink all day long. Worth a shot but not something to go out of one's way for.

Feel No Way from Hudson Valley Brewery
Beer rating: 86 out of 100 with 52 ratings