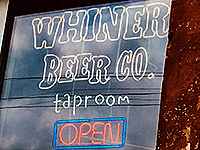 The space and vibe are considered in a way that few are, it has raw industrial bones with cool aesthetic touches like complex botanical planters set into the tables, alongside rusty corrugated metal panels and exposed concrete beams. Definitely a 'beautiful decay' kind of vibe. Warm lighting from strings of hanging edison bulbs and inset fixtures behind the bar. Mellow music on the big JBL’s high on the bar shelves, languid pop and yacht rock added to the relaxed atmosphere.

Service was ok at the bar, the lone bartender was timely but distant, not engaging at all, the bar was fairly deserted. There were a few flies and gnats around the bar, nothing a few brewery spiders couldn’t fix.

The location is out of the way, but in the general vicinity of Marz and Lagunitas. Maybe not on the trendy side of town, but seek it out and be rewarded. Throw in a stop at Maria’s/Kimski and Marz to make a day of it.

I’m guessing most people weren’t around when the first "third-wave" brewery was slated to be in this space, “New Chicago Brewing Co.” They later became Ale Syndicate, moved to Logan/Avondale for a couple years and then shut down.

this place is awesome, so unique, definitely a ways south of downtown, but its an easy enough drive and well worth it. its in an old industrial building in a very commercial heavy industry looking area, rundown stuff around the neighborhood, but we enter this unique shared space to quite a different feel. a handicap ramp built above a pond takes us up to the sprawling but ade to be cozy taproom, high ceilings, like an old warehouse, long bar, rustic looking, the place has been cleaned up but its character retained. they have cool tables of different shapes and sizes all over in here, modified so that the middles are planters growing an assortment of botanicals, sort of a greenhouse feel in here, almost humid, and some aquaponic looking water system in the windows doing something with sunlight and bubbling occasionally. the feel in here is awesome, urban and jungle, current and also back in time, great energy! they had a nice selection of beers, both in the bottle and on tap, and we liked all of them we had, but especially loved both peach and blackberry wild ales. the non wild stuff was a little less great, but all of it was good and the service was excellent. the attention to detail here is great, nice acoustic treatments on the ceilings so the nose is tempered, highly refined beer, cool glassware, and available wood fired pizzas from another vendor in the building, which also houses the brewery itself on the other side, a coffee roaster i think, and some other little operations. we had a great time in here just relaxing and playing cards drinking through their lineup. this is one of my favorites in chicago now, and i cant recommend it strongly enough!

The Vibe is interesting. It seems Whiner wants to be the brewer for a warehouse community of alternative food providers. And given that the warehouse is near Chicago's former stockyards and a yet-to-be redeveloped part of Bridgeport (really in the Back of The Yards ghetto) this is a valiant effort.

My enthusiasm for Whiner's ales have been a roller-coaster. Hugely enthusiastic to start, but then disappointed by the consistency challenges of focussing on the Belgian tradition and, even harder, using brett. So Quality is a bit checkered given the tough task. But, the bartender was informed and everyone was enjoying themselves in this cement warehouse that has been made as festive as possible.

While I had intended to visit after my first WOW tasting of Rubrique A Brac in April, other offerings pushed Whiner down my list. But they were featured in Open House Chicago (a great city-wide annual event), so I made myself go. And glad I did.
I Had a flight of three. It was a good value. I hope Whiner succeeds in a market that is growing for Belgians.