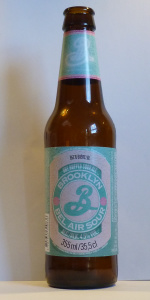 Lead by our James Beard Award-winning Brewmaster, Garrett Oliver, our brewers put their collective minds together to conjure up one tasty magic trick—a thrilling jolt of tartness up front opens onto a riot of tropical fruit, courtesy of our lacto, our ale yeast, and a generous helping of Amarillo dry-hopping. Soft barley and wheat malts keep things dry and refreshing, and the whole thing comes together to close with a fine dry finish. Brooklyn Bel Air Sour is racy and maybe even a little bit dangerous, but also effortlessly cool, breezy, and undeniably compelling.

Seems like others got a shit pack or something. It's definitely tart enough, a lot of mainstream breweries suck at having any type of tartness. However I will say using the word "tropical" is definitely for marketing as this tastes like a traditional sour that is not supposed to taste like real fruit.

Rated by TheRougeBastard from North Carolina

Looks - A deeper golden, almost brown in quality - very similar looking to apple juice. Foamy head, about 1 inch thick. Has the slightest tinge of brown to the head. Doesn't leave much lacing. A hazy-looking beer.

Smell - Funky fruit, I am getting a hint of apple and citrus fruit, maybe some pineapple too. Mingling in there is a cereal grain smell and the slightest bit of spiciness. Kind of smells like an IPA with something else...and that something else might be the Lacto/souring.

Taste - Interesting enough. I know this is a Wild Ale...but it tastes very similar to Sonomica and Napa Saison. Those are saisons..but have an extraordinarily sourness probably due to the wine barrel aging and such. Bel Air Sour is similar but misses on the level of depth (it is not aged and the sour is not nearly as strong as expected). I can forgive this because those two Farmhouse Ales were seeking something totally different. Sour is upfront. It is not as pronounced as many other sours are, but it isn't too weak either. It's a nice middle. It won't make you pucker, but it isn't sour enough to make non-beer drinkers amazed. Apple and pineapple mingle with the sour, you get the slightest bit of citrusy and spicy hop character before finishing with a clear cereal malt finish. The finish is long and varied as well. The aftertaste gives you the same sensation of sucking on a jolly rancher or a warhead candy. This was cool to experience. As the beer warms up or gets flat, the sourness becomes mostly a tangy and tart experience; however, the hop and malt characteristics remain intact.

Feel - Surprisingly smooth for a sour. It's fairly light in body. Goes down easy. It doesn't burn. It is not too effervescent. Most of the tingle comes from the sour and that is welcomed for a beer like this. I have to make a comparison: as much as I love Rainbow Sherbet or Vape Tricks from Prairie Artisan, those have a notable harsher feel. This is mild enough for you to kick back and enjoy.

Overall, this is a good beer. I'll probably pick it up again actually. I prefer other sours, no doubt. However, where this beer shines is by being both a decent enough sour AND a very good refreshing beer. I do wish it was a bit more sour and something more interesting going on in it...maybe bump up the hop character a small fraction. I would love to see a variation of this brew's recipe with fruit added and see how that changes things. All in all, I recommend even if there are better sours out there. This is good to have around.

Appearance: The body is a light gold color with a good deal of haze. Lots of visible carbonation supports a medium-sized fluffy white head with a mixture of stucco textured surface bubbles and a few random craters. Good retention.

Aroma: There is a light scent of souring fruit, a bit of orange zest, and some wheat aroma.

Taste: Up front wheat and tart fruit hit the palate immediately. The grain flavor really pops in the middle of the palate, giving it a mixture of cracked grain husk flavor and multigrain cracker flavor. Lemon and orange also join in the middle with a pleasantly tart flavor. It has a very nice balance of grain flavor and tart fruity character. A little bit grassy towards the bottom of the glass.

Mouthfeel: It is very refreshing and enjoyable. Carbonation feels great. It has a medium tartness which is pleasant. No bitterness at all. The body rests in the medium-light range.

Overall: It is an outstanding beer with a pleasant tart character with a wonderful grain backbone. It tastes very fresh and it is very enjoyable to drink. This would be a great beer to drink at a beach or while camping, so I am hoping I can find it again in a can format. I would definitely drink it again and I would recommend it to those who like a tart and refreshing drink.

Reviewed by GregDBoston from Massachusetts

Pours a light amber color with 1/4" white head. There might be a slight pink hue in that amber. The aroma, I dislike using the word "weird" but it wasn't "as expected" perhaps? Its hopped like a pale ale/ipa, then you have the lacto pitch sourness, but without the sour ipa branding. There is an almost brett like cotton candy aspect that is prolly just the color scheme doing tricks on me since there's no brett in this that I know of.

The taste is a largely introductory level sourness and complexity, which is to say that both are slightly underutilized. Has a sawft body, they again went with oats, are you sure this isn't a hazy ipa? Light lemon and green apple and something artificially pink kind of taste. I didn't dislike any aspect, but nothing blew me away either.

I liked the low price entry point, but most of these went to friends instead of myself.

Reviewed by HalfFull from California

Aroma is not quite as expected. Touch of lemon/orange seems only partially hop driven. Or maybe it's just that it is rather thin. Some raw grain notes are there as well. Minimal tart character detected on aroma, very minimal. Taste is mildly acidic but certainly not what I would call sour. Not sure where this beer is trying to go but I don't think it's gonna get there. Finish is sweeter than expected, diluted apple juice. Overall a stray dart for me, glad I only got one. This beer is about as wild as a poodle.

3.71/5  rDev -4.6%
look: 4.5 | smell: 3.5 | taste: 3.5 | feel: 4.5 | overall: 3.75
Golden with chill haze, nice white head, great retention for a sour, nice lace as well
Smells tart, like lemon juice and yogurt, a hint of cinnamon and biscuit
Very tart, puckering, almost. Lemon is about the only thing I can really pick out
Light bodied and well carbonated.
Definitely not my favorite sour ale, but if a fairly straight forward sour is what you're after, I suppose its good.

Reviewed by palmdesert from New York

3.99/5  rDev +2.6%
look: 3.5 | smell: 3.75 | taste: 4 | feel: 4.75 | overall: 4
A hazy yellow beer that didn’t maintain much head in my not-quite-perfectly clean snifter but still had plenty of lemony, slightly hoppy aroma. On first taste I got very tart key lime pie filling and it got more sour from there, then faded into a little malty, shortbready pie crust. In your mouth it feels like tart pie filling too in all its thick, sticky, sparkly goodness. On second thought, it’s more like a liquified sour hard candy, since this is a lot more tingly and acidic than any pie I’ve ever had. There’s a slightly dank taste in there somewhere, like whoever made the pie was smoking weed when it went into the oven. Maybe they got a little distracted and spiked it with apple cider vinegar and citric acid. I might taste a hint of green apple in there, or it could be a little second hand smoke going to my head.
Feb 12, 2021
Rated: 3.72 by FunkyPolak from New Jersey

Rated by 150lRoast from Missouri

Reviewed by OakLawnBill from Illinois

3.87/5  rDev -0.5%
look: 3.75 | smell: 3.5 | taste: 4 | feel: 4 | overall: 4
Poured from can with best buy date of 03/2021 into a tulip pint glass. Hazy golden color with 2 finger initial head that fades slowly away. Maybe it's me but the smell is very light lemon- lime. Creamy light mouthfeel. Dry and slightly tart taste. Finishes like it contains sea salt. The alcohol content is 5.8%. An excellent beer, maybe a touch too high in alcohol for extended session drinking. I really like it but a little more tartness would make this an outstanding beer.
Dec 19, 2020
Rated: 3.58 by robebo44 from Virginia

Reviewed by jwc215 from Arizona

Poured into a tumbler:

Pours slightly hazed light yellow. Not much of a head at all. Some vanishing dots of lace.

The smell is sour/tart - lemon and bread. A general citric - leaning lemon - aroma mixes with the sour yeast.

The taste is of upfront sourness that quickly mellows so that it is not puckering by the finish. A subtle sweet touch mixes in. Some citric/lemon hop character weaves in and out. Dry cracker in the finish.

The feel is airy/fluffy. A dash of water washes away some of the aftertaste. Very smooth.

Fits the general outline of the style. It has a subtle lemony hop touch. A wild ale that is not really puckering. Refreshing. Approachable.

Rated by ChrisST12803 from New York