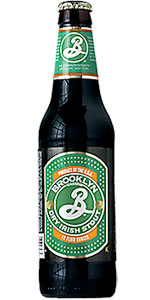 Brown/black hue; purple 'round the edges.

Mild & pleasant; not bold enough for me, but that's a style issue.

Brooklyn Irish Dry. Grabbed for $1.59 a single at my local meijer. Needed something to quell the IPA and Pils focus of the night. Let's get it.

Look - Black though penetrable by the light. Finger of tan head that settles to a ring amongst the glass. Carbonation is unreadable.

Taste - Used coffee grounds like to really dominate. Medium to black coffee with a touch of cream. Water on the tail end.

Feel - Moderate though watery if that makes any sense at all. High carbonation and swallows a touch biting.

Overall - Not a style that I've ever been huge on. Simply grabbed this to cut the mold for a night of likely hop forward beers. Got what I expected. Better than a Guinness but that isn't saying a whole lot. Quaffable without a doubt and I can't complain much.

Reviewed from notes. This was poured into a pint glass. The appearance was a black color with a one white to off white foamy head that dissipated within about a minute leaving some light speckled lacing clinging around the glass. The smell had a dry roasty coffee bean which came across slightly espresso - like. Dark chocolate came through in a light sort of way. The taste was mainly dry and roasty with the same aftertaste and finish. On the palate, this one sat about a light on the body with a pretty good sessionability about it. The carbonation was fairly subdued but still good for its style. Overall, this was a pretty good Irish Dry Stout that I would have again.

Bottled
Black bodied with splatterings of say 33% surface tiny tan bubbles
Nice malty coffee aroma
Burnt toast, blackberry and coffee flavour
Slightly too fizzy, Slightly too thin
it's an easy going dry Irish stout
Get it down ya, it'll do ya good

I dunno.
Maybe I'm being influenced by the "Stout" on the title.
Poured looking nice-- not exceptional but nice. Welled up with a nice looking head.
Flavor-- eh. Once again maybe it's the specific style that's throwing me but this beer seemed "small"-- flavor, mouthfeel, etc. Thing is I didn't think it was even a good thirst quencher as it has stout like elements but also "lite beer" elements as well. Does have a "dry" notes in the flavor but in all needs "more" and maybe "more of everything".
I'll stick with the Black Chocolate Stout.

Pours to a frothy head that dies to a thin ring but does try to lace. Aroma is sweet, malty and very roasty. Flavor mirrors the smell and finishes with a slightly creamy, coffee like character. Mouthfeel is medium-full and satisfying. Well done Brooklyn!

4/11/15 (Bottle) -Nice dark black pour with mild carbonation and a nice generous tan head with decent thickness. Very enjoyable aromas including roasted malts, coffee, chocolate, and hazelnut. Beer tasted excellent, with the rich aromas all present and enjoyable. Nice going down, felt the carbonation. Beer not very strong, and makes a great paring with a meal or dessert. Excellent offering by Brooklyn Brewery!

12oz bottle served in pint glass. Beer is perfectly pitch black in color but forms little head. Mild, roasty-malt aroma. Flavor, too, is mild, i.e., sessionable, but pervasive with layers of chocolaty roasted barley. Bitterness is tightly controlled and just serves to make this stout finely balanced. Finish is dry but not quite crisp.

Carbonation isn't out of control, but makes its presence felt. Not too bad, but I think this beer would do a lot better on cask, or at least Nitro.

This is one of my favorite "everyday beers". Flavorful enough to keep me interested all the way through, yet not so intense that it bogs you down after one or two. Excellent.

12oz bottle purchased at Liquor Barn Hamburg
Pours dark, but not too dark with light tan head that finishes off at about 3 inches.
Smell is thin for a stout by average for others of this style.
Taste is empty and thin. Yes - thin is the theme. I know that Irish Dry's are thinner than their American counterparts, but I would like more body. Best flavor is it the aftertaste with light coffee that is reminiscent of a frappe. Overall not a bad beer by any means and stays true to the style, but does not stand out enough to warrant a repeat purchase.

I'm a big fan of this american take on a classic style. It's packed with flavor and complexity you'd expect from a bigger stout, but is still light and easy drinking. Love love love. If I can find bottles of this it would be my go to easy drinking dark beer.

I had this on tap. It has a roast nose - coffee and chocolate with some sweet notes. It pours dense black. It has the dry stout roast and burnt barley bitterness but it has traces of sweetness in the background that are separate from the roast. the body is medium full and the carbonation medium.

Appearance: Pours a dark almost-black brown, with ruddy hints of light glowing sullenly at the bottom edge of the glass. Forms almost no head, and what does form vanishes quickly, save for a very thin pale ring.

Smell: Dark black roasted grains in a field of pollen and flowers, like a farmer's crop had been burned away and nature were just beginning to reclaim the land. There's something vaguely acrid as well, and some ghosts of something wooden.

Taste: Blackened malt grain stars, with hints popping up here and there of floral notes, earthiness, ashes, chocolate, light coffee, and very vague fruitiness. Nothing is ever fully prominent save the roasted malt, with the other flavors rolling over and into one another in the background.

Mouthfeel: Light and close to watery without ever verging on actual water, this is pretty close to what an Irish stout should drink like.

Overall: Not a bad go at an Irish stout. A little more identity to the flavor profile, rather than being everything and nothing at the same time, and this could be fantastic. As it stands, it's solid.

Brooklyn Dry Irish Stout - Brooklyn Brewery. Poured from the bottle into a tulip glass, this has got a huge four finger thick, spongelike tan head, solid lacing, and a very dark brown body. Quite an eye-pleaser.

I smell toasty malt along with full bodied malts. Not much hops are hitting the nose, but I wasn't really expecting that.

Tastes also like toasty malts, also with a small touch of chocolate and coffee mentioned on the label. Pretty easy on the palate.

This brew's mouthfeel is smooth and clean.


I'll give Brooklyn Dry Irish Stout - Brooklyn Brewery a 4.25 This is an easy-going stout that you can knock back a couple of and not feel sleepy. Nicely done by these guys.

T: not a lot of flavor; what's there is roasted grain; a little sharpness up front; a bit of tartness at mid-palate; light bitterness at the end;

O: OK, but not very interesting;

Not as creamy as Guinness, and does not have as strong of the roasted barley taste. A bit more watery. Light for a stout. Definitely decent but not the ultimate

Poured dark caramel brown. Persistent tan head that leaves a ring and wet slippery lace. Pours with a thickness. Nose is roasty grain. Smooth sweetness from caramel under that. Earthy, coffee and a malty sweetness. Taste is good. Sharp and full of flavor. Roasty gran with a slight hop bitterness to give it edge. Drinks dry and very crisp. Lightly sweet. A smooth and quick drink that finishes dry and with plenty of maltiness to linger. Textbook dry stout with a rich and full mouthfeel. Smooth and creamy too.

on draft, in a nonic pint glass

It's not nitrogenated, although that didn't occur until 1964 with draught Guinness so it's not historic and doesn't really matter here. And it does have a little bit of a sour tang to it, which would be historically accurate, although neither this nor the current Guinness are even nearly as sour as the stouts of yesteryear would have been. I think the twang here is really just from a low pH, and not due to any soured beer added back in as Guinness does.

If you think along the lines of a Guinness Foreign Extra stout with a much lower starting gravity and adjusted bitterness you'll have a pretty good idea of what this beer is about. It's roast and chocolatey, and slightly caramelish. It's about the malt, and there's really just a little bit of hop in the flavor, which is probably not even equal to the fruitiness of the yeast, which is also limited.

It's a difficult beer to formulate in some ways because the style, really, is a bit disjointed. It's got spikes of roastiness, bitterness, and acidity; and there's some of that here but it seems that Brooklyn wanted to try to round it out at least a little bit to make it more drinkable, which it is.

So why would I want an Irish style stout brewed in the US? To celebrate Saint Patricks Day, of course! Although Guinness is seen as quintessentially Irish, it's actually an English company that persecuted the Irish. Arthur was a committed unionist and opponent of Irish nationalism; and his decedents financially supported the Ulster Volunteer Force and allegedly lent men and equipment to the British Army during the Easter Rising of 1916. So this year I'll have a Murphy's, a Beamish, or a Brooklyn... but I won't support Guinness.

355 ml bottle poured into a tulip glass. Pitch brownish-black with a moderate amount of tan head that settles out quickly into a thin topcoat. Aroma is rather subdued but pleasant, milk chocolate is the main vibe I am getting along with coffee and hints of caramel and charcoal. Slight earthy Goldings hop. Palate flips the script and is predominantly coffee, more earthy and dry than the nose suggests. Hints of red berry. Drinkable (read: thin bodied), rather fizzy, and slightly citric. The sour note is likely an attempt to emulate the vaunted Guinness soured flavor and frankly manages to trump the original, although this is perhaps better described as an alkaline "soda" effect here. Not bad but finishes strangely empty and I think the intended target was overshot with regards to sessionability. Looking for the flavors to pop more.