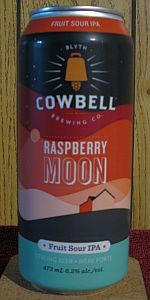 Pours a foggy, pinkish-orange salmon colour; situated atop is more than two fingers of soapy, pale pink-tinged foam that settles off within a couple minutes' time. Several arcing bands of lace are flung about in its wake, with a frothy collar and thin cap remaining in place - no complaints from a visual standpoint. It smells mostly of raspberries and weakly funky lacto tartness - kind of a lemon yogurt vibe, with additional hints of grapefruit, melon and lime.

It's pretty tasty - raspberries and lactic acidity at the forefront, with hints of oatmeal sweetness in the background, but it's mostly tart throughout. The hops do impart a few hints of tropical fruit - orange, lime, melon and grapefruit come to mind, preceding a pithy, floral finish and a tart aftertaste with lingering raspberry. Medium in body, with moderately assertive carbonation that feels prickly on the tongue. Decent drinkability - there's no real sign of the 6.2%, and I enjoyed my glass well enough, but as is the case with most sour IPAs I found one to be plenty for me.

Final Grade: 3.71, a B grade. Cowbell's Raspberry Moon is a decent to serviceable stab at a sour IPA. The raspberries and lacto sourness definitely overpower the hop/IPA-oriented elements - and depending on where you sit, that may or may not be a big problem for you. As someone who enjoys raspberry beers in general, I was partial to this one right off the bat, but your mileage may vary, obviously. Reminds me of Wellington's Shubie, another semi-local raspberry sour IPA of recent provenance, though I think I prefer Cowbell's take on this (rather specific) substyle.

Smell - Raspberries for sure, some semblance of earthy and weedy hops as well, lemon thrown in for good measure among other indistinguishable citrus.

Taste - Raspberries, yes, but not actively involved then turns bitter with the lemon and lime chiming in with some weedy notes. Not bad, but not the most cohesive flavor profiles. Sour but not overly so - another beer that is fine, but trying to do too much at once.

Overall - Decent brew, but like many of the sour IPA's that seem to be the latest craze, neither the sour component nor the IPA component is strong enough to make it a memorable or particularly enjoyable brew. Worth a try if it's your thing, but I'm unlikely to repeat the purchase.