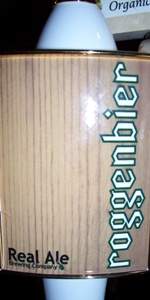 brown color coming forward immediatly from the glass. Rich looking, and very clear. Lots of carbonation bubbling up toward the surface to reinforce a rich looking head of about an inch in height ]

caramel mixed in as well. providing a slightly sweet balance to it. The only downside would have to be the lightness of the aroma, needed a little more kick. The flavor was very well rounded. Started with a nice punch of caramel, with a decent roasted malt, and smoked quality coming through in the middle.

A: Light gold or wheat with a bit of haze. Small but persistent head that provides sufficient lacing.

T: Looks like a hefeweizen and tastes like one with rye. Yeasty but not unpleasantly so. I do not taste the bubblegum that everyone says I am supposed to taste. I count that as a good thing as bubblegum-flavored beer sounds repulsive. The rye is definitely there and adds a bit of spice to compliment the fruity background of the beer.

M: Sticky and prickly. A wee bit on the heavy side, but still very smooth.

D: This is a great use of rye and is not one that is overpowering. I can see drinking this again.

Pours a very nice, hazed, golden color, and is topped by a thin, white head. The aroma is very fruity, with notes of bananas and apricots. There's a bit of grassiness as well as hints of yeast.

Sweet, bready malts upfront move into a fruity center with notes of bananas, as well as other fruits. The finish has bit of citrus and a mild, grassy bitterness. Medium-bodied and vigorously carbonated.

The flavors are nice, but the beer is a bit too sweet overall, and I think that any flavors contributed by the rye malts are overpowered by the fruitiness.

First tap of the keg at the Addison Flying Saucer.

Poured in a pint glass, one finger white head that died before I wrote the first line, receded to a ring around the glass. Moderate to no lacing. Light opaque orange in color. Banana, clove, coriander in the nose, totally comes off as a hefe. Not getting a whole lot of rye notes as I was expecting. This could stand right up next to Live Oak hefe' in my opinion, and bet it. Easy drink, highly enjoyable just not sure if it is on par with the style. Ie, would have a higher smell and taste rating if they just called it a hefe. But it is a solid beer, recommended for hefe lovers.

Notes, this was brewed with wheat malt and rye malt, but my understanding of the style is a strong rye brew, or 100% rye. This is obviously a Real Ale BC re-interpretation.

A: Pours a cloudy golden/orange color. A two finger head forms, but recedes fast. Good lace is left behind.
S: Musky and funky banana. A bit of spice from the rye.
T: Lots of banana and citrus flavors. Spicy rye again.
M/D: A medium body that is slick and oily. A bit over carbonated for my tastes. A very smooth and refreshing beer quaff.

Think a hefe with some rye spiciness. Thats what this is. My first Roggenbier, and I am not sure if this fits the style, but a very enjoyable beer anyway.

Had on draft at The Ginger Man....

this brew pours a cloudy orange color with a decent white head. The nose is composed of fruit, orange citrus, very sweet. The taste is citrus, very sweet, floral hops, subtle spicy hops. full bodied, low carbo. very dry finish. This beer may be a little too sweet to me but was a decent beer nonetheless. I didn't detect much rye. Im no rye expert though.

pours a minimal head with little lacing but a nice cloudy yellow color.

banana phenol and citrus and rye come out on the nose. it smells as if a german yeast strain was used for an authentic flavor.

there is a considerable amount of rye malt. the beer is slightly sour from this. fruity banana esters lie underneath and lend to the sourness of the rye. its hard for me to judge the flavor though. the mouthfeel is a bit thin and robs one from truly appreciating this beer

I have to take off a bit more here because the mouthfeel robs from the overall enjoyment of the brew.

On tap.
Very light gold pour with a short lived tiny head. Smell is spiced like a hefeweizen with cloves and same notes. Nice if you like hefs, but I find that scent strongly offensive. Was hoping this was more rye than hefeweizen, but it basically came across like a german hefeweizen with a faint hint of rye spiciness in the taste perhaps. Decent beer I guess, but not for me.

Pours out an ever so slightly hazed brass with a thin white ring of bubbles atop the beer. has scant bubbles making their way to the top. Smell is grainy with a lot of odd coriander rather than clove. That with the spiciness of the rye almost reminded me of a Belgian offering. Weird. Taste again seems odd with its focus on coriander. Some clove is in the background, but that odd coriander trumps it. Ends grainy. Mouthfeel is kind of thin and slick while stinging the tongue with bubbles. Drinkability is OK. Since this is my first roggenbier, I can't tell if it's the style that doesn't sit with me or if it's just Real Ale's interpretation.

bday! first beer of the night! ... wonderfully full and delicious!... some rye and caramel hop smell... lacing is more than decent... a glider down the throat... taste is very nice, sweet yet assertive... COULD NOT be more balanced, perfection in that sense!! another real ale winner!!!

Aroma: Prominent sweet aroma, as expected for a beer brewed with a large proportion of rye malt, also ripe banana notes, and the characteristic spiciness of rye.

Taste: Mild rye sweetness at the open, as well as light tropical fruit notes, and spiciness. These carry throughout the taste. Finishes with a subtle hop bitterness.

Sampled on tap at The Draught House in Austin, Texas on October 13th, 2007.

One of the local offerings on tap at the Flying Saucer in Houston.

The beer is a hazy gold with a bone white head.

The nose is similar to a hefe. Clove, banana and all spice. The rye adds something nice.

The taste is spicy with tropical fruit. The rye makes this one interesting. It adds a peppery taste that compliments the banana & clove.

The mouth is slightly slick with pinpricks of carbonation.

This is a nice change-up from a standard hefe.

Website lists 4.9% abv. Fall 07 release, 10 IBUs, OG 12.7 Plato.
Sampled at the Draught House in Austin
Quote (German for "rye beer") is a style not commonly found in the U.S. Real Ale Roggenbier is golden in color and similar in flavor to a hefeweizen. Traditional German hefeweizen yeast produces notes of banana, clove, and bubblegum. Forty percent malted rye gives this beer a hint of bitterness and a crisp, dry finish. Try it with a pastrami sandwich

Aroma: Yep, smells like a Hefe. Banana esters and a light spicy note that I believe is the rye.

Appearance: Hazy gold with some clarity, clearer than I would expect for a Hefe. Good ¼ finger white tight head that lasts and laces well with mild tidemarks.

Flavor: Full of the same spice note which has to be Rye. Yeasty element that has a good bubblegum aspect.

Mouthfeel: Heavy body brings a bit of chew and a syrup texture.

Roggenbier from Real Ale Brewing Company
Beer rating: 85 out of 100 with 19 ratings