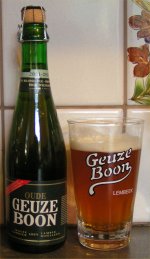 Notes: Brewed with 40% unmalted wheat, 60% of barleymalt, aged hops and wild yeasts collected from a coolship and is aged for up to 3 years in oak casks.
View: Beers
Reviews: 306 | Ratings: 848 | Log in to view all ratings and sort

Cautionary note in advance: This bottle had been stored, chilled, opened and poured very carefully yet it still managed to overflow onto my desk. Have your glass ready at hand!
L- Quite dark amber, very slightly hazy, pours with 2Cm pillowy off-white head.
S- There's something dry, earthy and bit like home-brew to it.
T- Oh gawd... it's SOUR! So much so I'm worried it will dominate above all else. My palate does begin partially adjusting but this is still perhaps the sourest of c800 beers I've had to date. Somewhere through that comes a chink of timber and fruit, gooseberry perhaps followed by lemon juice on the finish.
F- Dry, extremely sour.
O- If it cost less I wouldn't have persevered. I will not be buying this beer again.
375ml bottle. BB: 25-06-2039[!]. £3.99 from Wholefoods, London W8

Semi-clear brown with two finger of white airy foam. Smell has the classic gueuze aromas: belgian yeast, oak, sour grains, funk, must, and vinegar accented fruits such as apple. Taste was not as powerful as the smell, in fact it got pretty faint after the initial burst save the wood and sour grains, want more funk especially, but a good geueze nonetheless. Feel is thinner and airy, but has good wood and souring character with a lighthearted graininess.

Overall - my first foray into this style and it isnt too bad, nice belgian flavor with a bit of tart/sour/funk but not too overpowering

Poured from a bottle into a tall fluted glass. Brownish yellow color with a short lived head and little lacing. Earthy, slightly sour smell and taste. Funky and fruity flavors. Great with food. Would buy again.

-hazy amber bottle pour with a 2 cm fluffy foam cap. The aroma is tart and includes grape and woody notes. There is apple, grapefruit,lemon, oak and vinous bitterness in the flavor. The finish is somewhat dry. I really like this.

The label says A L'ancienne but brewed by Boon. So I am assuming this is not the De Konnick version. Bottle says 2014-2015.

A: Pours a a hazed golden/orange color. A one finger white head forms and gently fizzles out. The foam sticks as a cap all the way through.
S: Really funky and cheesy in the nose. Peppery spice, musty and dried fruits. Grapefruit and citrus. Very nice.
T: Again funky, acidic, cheese. Very earthy. Peppery spice, dried fruits. Grapefruit and citrus rind, and even some bitterness lingering. This is intense, but very enjoyable.
M/O: A medium body that is very effervescent. Finishes dry. With the funky, cheesy aspect, it can be a bit intense. I still find this really enjoyable to drink. Especially if you are a fan of the style.

Again, Boon makes an excellent Gueuze. The funky, cheesy, acidity can be a little intense. Though the grapefruit, citrus, bitterness counters that well. Really well done.

Golden amber, fluffy head that settles into a thin lace. Aroma is sweet - lemon, orange, apple cider, pear all backstopped by a cajoling farmhouse yeast. Palate begins with a tart burst followed by earthy sandalwood, leather, oak, champagne yeast, sour apple & stonefruit pit. It certainly has a maltier backbone that many geuze’s, finishes a little heavy and biscuity but that is the only drawback. Otherwise excellent

Poured into a tall clear pint glass. Rich amber color with many tiny floaters in the beer. Head is foamy white and dissipates rather quickly. Good lacing.

Notes of hay, tart green apple peel, and white vinegar are upfront on the aroma. Other notes of leather, fresh bread, pears, and orange rind. Altogether, kind of smells like a white grape wine.

Tart green apple skin make much of the palette bitter, along with strong lemon zest. Vinegar interestingly helps control the bitterness with its own acidic twist. Hay and brown leather linger in the aftertaste. Mild citric notes in the background, particularly the orange rind. Altogether, a very exciting, wild beer with a wide variety of different flavors and combinations.

bottled and all sorts of aging and conditioning. I've poured it into a Westy 12 glass to give it a bit of regal treatment
slightly cloudy very golden body with okay white head
aroma is boozy sherry
flavour has sweet fruity tart funky and deep

Pours a light gold, straw coloration with a small, fizzy head, visible carbonation and some fine floaters on the final pour. Smell is mild funk with notes of hay, lemon zest, tart green apple, quince and just a hint of white vinegar. Taste is dominated by a medium green apple tartness, mild, mildewy funk and light biscuity malt, with notes of hay, quince, lemon zest and just a hint of white vinegar. There is a somewhat faint earthy/woody note in the background as well. Finishes with a light/medium tartness and some funk and lemon zest lingering in the aftertaste. Soft, effervescent mouthfeel with a light/medium body and lively carbonation.

A very nicely balanced Geuze with a good complexity, but somewhat understated funk/sourness. Body is a tad too light, but really not that bad. Very nice, effervescent mouthfeel.

Reminds me of a saison, but far more pungent and strong. Highly carbonated with notes of pear and a bit of funkiness. There's a lingering bitterness that is unlike any other beer I've experienced. Very complex. A good sipping beer.

Look: It pours golden with very good clarity. It has a white head with good head retention.

Smell: Leather and horse blanket and the first aromas that come through in the aroma. There are some earthly elements and low oak notes as well.

Taste: It has a moderately sour flavor with horsey and barnyard elements. There is also a mild oak flavor.

Feel: It has a light body with a very dry finish. It is moderately high in carbonation.

Overall, this has a good combination traditional earthen elements with a classic dry finish.

L- Pours a humongous four finger head with a golden straw colored body.
S- Smell is extremely funky, yeasty, skunky and sour. Lambic is extremely present and it brings an almost grape wine aroma with it. Very nice on the nose.
T- Its very sour, but not overly so. Lime, grape, wine, and even a little bit of salt. Well done flavor.
F- Decently dry on the tongue. Tart enough on the tongue.
O- This is a great geuze. Wonderful crafted and delicious. Sometimes, minimalism is the best. This beer was a pleasure to drink.

This is a very good gueuze that is more approachable than better variants of it. I had it on draft (hand pump) and it was not at its freshest but nonetheless it features a nice fruitiness and a teasing acidity that made it very enjoyable and easy to drink. A very refreshing and thirst-quenching beer!

Flavor - Acetic character is the base tone, some washed out malt character with a slight lychee/ pear ester which only shows for a moment before a pretty forceful solvent character comes in at the end. Manage to catch a little lemon and new leather , and maybe forest floor, along with a snap of minerallity mid-palate.

Mouthfeel - medium light, a little puckering, strangely flat on the palate despite the high carbonation, and then the acetone/ solvent in the finish. no unpleasant aftertaste.

Overall - These beers can be so pretty, and some nice elements are there, but overall not best gueze I've had from Boon. I seem to b e increasingly disappointed with subsequent vintages. I hope things aren't going downhill over there.

Poured from 750ml bottle into glass. Best before end of 2033.
Clear, deep gold colored body. Fizzy head dissipates rapidly to very thin ring fed by bubbles. No lacing. Lots of ascending bubbles.
Aroma of lemon, green apples, bread, and mustiness.
Flavor is slightly sweet but sour also. Taste of lemon and oak barrel. A little green apple and cherry also. Funk is minimal. Not much of an after taste. Dry taste profile.
Thin to medium mouth feel, with higher level of carbonation.
Not complex with aroma and taste layers, but very serviceable as a good tasting sour.

The beer pours out a light hazy golden color, with 1 finger of white head---------- the aromas are of tart apples, floral/grass, stone fruit and subtle funk------------ the flavors are of Apple juice, subtle tartness, pears, subtle funk and hay/grass, the beer has a medium mouthfeel with a tart dry finish----------- overall this beer was nice, it was a clean and crisp version of the style was hoping for a little more funk, still tasty though--

This beer is a lighter tan in color and doesn't have much of a smell—an unremarkable start serving as a façade for a very delicious, refreshing beer. Its crisp sweetness has something of a bite to it, and its tones of apple and white grape go well together. This tastes like the perfect beer for a summer day lounging by the pool.

Apple vinegar aromas with some funk. Definitely tart but not without some sweet notes.

The taste is tart, funky, woody, slightly sweet but overall, very dry. I want to say there's a peppery presence but I am not sure on that.

Pours a golden color familiar and normal for gueuze. 1/2" white head, this looks like the prototypical gueuze here, there isn't much in the way of head retention. Aroma is I dunno, gueuzy, tart, sour, lemon, dry oak.

Taste is more of the lemon, green apple and oak, sourness all over it, probably in the 6 range on the 1-10 sour scale. Not overly acidic, lots of carbonation in the mouthfeel, hides alcohol pretty well. Its a good value at just over $10 a bottle. I wouldn't say its as good as Cuvee Rene gueuze, but that is some world class kind of value. I'd prefer 3F or Cantillon sure, but those are going to be 4-5x the cost, and availability sucks, not to mention possible shipping charges because you won't find that stuff on shelves like you will this one.

Its not the most complex funk aspect, its almost completely absent, but I think its a good gateway gueuze with cleaner impressions for those not ready for a shithouse in a phone booth kind of experience.

Oude Geuze Boon from Brouwerij Boon
Beer rating: 90 out of 100 with 848 ratings