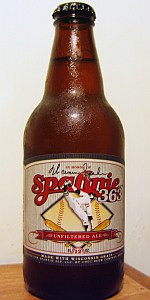 A buddy of mine picked up a 6-pack of this for me.

Poured a cloudy golden color with lots of fluffy white head on it.

Smell is wheat and yeast throughout.

Taste is light and balanced. No real overpowering flavors for me. Maybe a hint of citrus.

Mouthfeel is light and refreshing. Above average carbonation.

Poured into a nonic pint...

A: pours a hazy old gold color with lots of sediment. has a large, moussey, white head with great retention leaving good lacing as it slowly dissipates. looks nice, but the hazy character and thick foamy head are not typical of the style

M: a medium aroma with a fizzy carbonation and a dry sticky finish. reminiscent of a hefeweizen. just a little heavy for style.

Overall, i would say this beer is fairly good. I had no idea what style it was when i bought it. Had I known it was a kolsch i most likely would have passed it up. Lucky for me I didn't. Unlike other plain, boring kolschs i have tried, this beer is full of flavor. Worth a shot for sure.

Pours hazy yellow with a dense creamy head that hangs around awhile.

Aroma is sweet, pale and toasted malt. Mild caramel and lemon grass notes, along with a vague musty yeast character.

Taste is initially similar to the nose. Sweet and lightly toasted malt. Then the lemon grass kicks in along with some dark fruit. Finishes with a peppery, crisp hop bite.

Overall an easy drinking session ale. Nothing over the top, but that matches the style. Flavor is subtle and interesting.

Poured a nice cloudy and golden yellow with a thick creamy off white head, nice retention and good lacing.

The nose has a nice fruity and bready flavor with a good mix of sweet and malt.

The flavor is very malt centric with a slightly sweet and doughy taste. A bit of very bready yeast and some light noble hops balance this beer out quite well.

The mouthfeel is creamy yet dry at the same time, giving this a nice refreshing texture.

Thanks to a generous trader for sending this my way. Served in a pilsner glass.

Pours a moderate golden color with quite a bit of haze. Way too hazy and dark. Slight white head with a tad bit of lacing. The nose brings forward quite a bit of bready malt and some general yeastiness. No fruitiness or hops to speak of. Pretty tame. The taste brings a touch of sweetness to match the bready malt, but there's not much else going on. Finish is pretty bland. Light to medium body. Low carbonation. Just eh.

12 oz twist off. I have no idea what the meaning of this beer is as i hate baseball and didn't read the label. Bought it so I could try a brew from Oklahoma.

It pours a clear gold with a fizzy head that quickly dissipates.

It doesn't smell like a koelsch but rather a Belgian pale, a weak one, with subtle frutiness and malt

The flavor has a dirty malt taste and that is about it, light hops, not much form the yeast.

It is basic, good for people to get into craft beer, I suppose they marketed it for baseball fans and not necessarily craft beer drinkers.

Served refrigerator cold, poured into a pint glass from a 12 oz bottle.

A - Straw colored, with a slight orange hue when held up to the light. Pours a nice head but dissipates fairly rapidly.

T - I detect coriander, similar to Choc's Last Laugh, but not as strong. It's almost an exact cross between Waving Wheat and Last Laugh. Notes of citrus like in the nose. Low on the malt/ABV, but good balance. Enough hops to be refreshing.

Bottom line - I would highly recommend this beer. I love everything from Choc, though, so I might be biased.

Smell is basically just pale malt - but pick up a bit of lemon aroma as well.

Taste is good once it warms up just a touch - is pretty light, just a little bit of sweetness but I wouldn't call this beer sweet. More light, crisp and refreshing - not much hops but they do add just a touch of spiciness. This definitely has German Characteristics about it - but im not 100% sure I would have pinned it as a Kolsch blindly. ABV is not listed, but I would put this at about 5-5.5%.

Moutfell was good, medium. I thought it was just a bit over carbonated, but nothing a bit of swirling in the glass wont settle out.

Overall this is a nice refreshing drink on a hot Oklahoma day, nothing I would ever crave - but I would never turn it down either.

Served in a Celis (RIP) shaker pint. Small white head is quick to dissipate. Well carbonated. Cloudy bright golden orange color. Aroma is very faint, just a hint of grain and citrus. Taste is quite light. Starts with a sweet creaminess, becoming more sour and bitter in the middle. Finish is a bit tart with minimal aftertaste. Medium chewy body.

Not bad but pretty meh. Did not realize this was supposed to be a kolsch...

Pours a clear yellow with a small white head. Smells of freshly made bread dough. Taste is light malt up front, with a yeasty, fruit tasting middle, and a spicy hop finish. Nice bitterness levels. Mouthfeel is good, medium carbonation. Drinkability is quite good, easy drinking and refreshing. Not a complex beer by any means, but I would get this again.

S - Is of grainy malt for the most part

Murky, straw-yellow in color with a white head that doesn't stick around for long.

The aroma is faint with some cracker-like malt and spicy hops.

The taste has some light malt sweetness a little fruitiness from the yeast. Hops are actually somewhat prominent, but I can't decide how I feel about the odd spicy/herbal/grassy character they are contributing. It's a little unique, not good or bad, but unique.

Mouthfeel and carbonation are adequate for the style. I'm glad I sampled this but don't think I'll be having another.

12 oz bottle poured into a Sierra Nevada Imperial Pint. No date or info.

A - Sphanie pours a hazy pale yellow straw with a big three-finger, snow-white head. The bubbles sparkle like snow too. Great retention and some thick lacing as the head slowly went down.

S - Strong wheat aroma with a pale malt base and a lemony citrus zest. A hint of spiciness with the mild unfiltered yeast.

T - Pretty much lacking in an real flavor, it's got a light crisp wheat base with a kiss of the lemony citrus and really not much else. Not that the flavors are too low, it's more like "there are no flavors."

M - Light-bodied, crisp, and refreshing, it's fairly carbonated but goes down smooth. A bit hard feeling too.

D - It looks great but smells mediocre and tastes even less-so. Fine beer for a six-pack for a kick-back beer to tale gate with, but it lacks in flavor and feel. Not bad, just not much there.

I've seen this beer everywhere around here and I'm happy I waited on it for the chance to get a single.

Powdery/lumpy white head. Hazed, golden wheat body. A touch dark for a kolsch, though there's no real style indication beyond "unfiltered ale" listed on the label.

From the label: The Beer Maker and the Baseball Player.

You know Warren Spahn from a baseball career that spanned 21 seasons , 363 wins and a Cy Young with stints in Boston, New York, San Fransisco and of course Milwaukee, with a brief intermission in Europe to fight the Nazis.

What you might not know is that Warren and his wife Lo Rene made there home in SE Oklahoma in the off-season. Not far from the Spahn Ranch was Pete's Place Restaurant, owned by Bill Pritchard. We're not sure if the big attraction at Pete's was its Italian food or its famous Choc beer that was made there. But the results was a friendship that lasted a lifetime.

Now, please raise a glass and help us toast our fathers, the baseball player and the beer maker.

Spahnie 363 is an unfiltered ale made with Wisconsin grain and with Warren's unique style in mind.

Spahnie 363 is the latest variation of the Choc beer to be released by the brewery. It pours up quite easily with a moderate carbonation that creates a bit of froth above the very hazy, straw-pale golden body. The zesty aroma has some wheat berry maltiness that contributes a subtle sweetness. The flavor starts off with some flaked wheat graininess followed by a light citrus (lemony) fruitiness & a grassy bitterness that develops late bottle to create a balanced, off-dry finish. This light-medium bodied beer is very approachable with a good quaffability which is what the brewer's intended, but it's certainly not a Kölsch or even a Wieß. No matter what it's described as, it'll be nice to find a good hand-crafted beer like this around at the baseball stadiums & special events in OK. I found the first incarnation of this beer called Lefty 363 which was considered by many to be a farmhouse (saison-style) ale much more interesting. I seriously doubt it was the beer that Warren Spahn visited Pete's Place for, as he mostly drank Heineken but it makes a good story nontheless. Here's to one of baseball's greatest pitchers!

Brewed for Spahnie LLC (Krebs, OK) so it's a Pete's product IMO. Brewed in tribute to Warren Spahn & his 363 MLB wins. Unfiltered beer

T: Lemons, graasyness & a touch of salt? up front, plus a bit of apricot juice. Lemons & apricot dominates as this warms, along with a bit of golden delicious apple. Finishes crisp with apples & grassyness

Pretty drinkable, nothing too challenging, but I could down 3 easily on a day like today. Pretty true to style,as with most Pete's beers, get it fresh or you are rolling the dice..