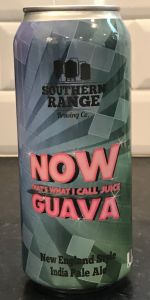 Pours a thick, off-white, and pebbly head. The liquid is a straw-gold and not quite hazy. If you add the dregs it makes the beer look chunky and gross, but you probably should dump them in (more on that later).

The nose is cotton-candy, bubble gum, guava, and oranges. A bready malt note hangs out under all of that.

The flavor is bubble gum, citrus rind, oranges, and a weak impression of guava. There are grassy and piney notes that hang out in the finish as well. The sweetness of this is coying, and the bitterness and carbonation don't do enough to wash away that sweetness. The bitterness in this is actually kind of weird and earwaxy. If I really focus on it, I can taste the alcohol, but one would have to be looking for it to notice it. The flavors in this round out a little better when the dregs are added to it, really bringing out the orange juice and rind notes, as well as making the bitterness less earwaxy. The coying sweetness also subsides to a moderate sweetness. The guava is still a weak impression, but the beer actually becomes quite tasty with the dregs.

The mouthfeel, with the dregs added, is very smooth and just south of full bodied. The carbonation is fairly aggressive, but helps brighten up the beer. The alcohol burn is pretty well disguised, but can be found if the drinker searches hard enough.

Overall, this is a good beer, but only if you have it with dregs added. Without the dregs, this beer is a mess. Also, it really does not have very much guava going for it, so It really doesn't seem to be what the brewers are going for. On this second half of the pint, I am really wishing I had another can or that I had poured the dregs earlier.

A: Pours a murky pale golden yellow in color with moderate amounts of active visible carbonation rising quickly along the edges of the glass and moderate straw yellow + bright pale yellow colored highlights. The beer has a three finger tall foamy white head that slowly reduces to a medium to large sized patch of medium thick film surrounded by a large patch of very thin film covering the remainder of the surface of the beer and a thin ring at the edges of the glass. Slightly heavier than moderate amounts of lacing are observed.

T: Upfront there are just shy of moderate flavors of biscuit, caramel, and oat malts with light to moderate amounts of caramel sweetness. That is followed by strong flavors of tropical/guava. Finally there are moderate to strong flavors of juicy tropical/passionfruit, tropical/mango, tropical/pineapple, and citrus/grapefruit hops which impart a minimal amount of bitterness which fades quickly leaving lingering tropical hop flavors.

M: Just shy of medium bodied with moderate amounts of carbonation. Soft and fluffy with a light amount of dryness in the finish.

O: Easy to drink with well hidden alcohol and that soft + fluffy NE IPA mouthfeel. Enjoyable with really nice tropical+ citrus hop flavors/aromas as well as a huge presence of guava. Delicious and glad that I finally got to grab this one (kept showing up mid-week when I was not able to get to the bottle shop and selling out an hour or so before I arrived).

Now That's What I Call Juice - Guava from Southern Range Brewing Co.
Beer rating: 89 out of 100 with 13 ratings