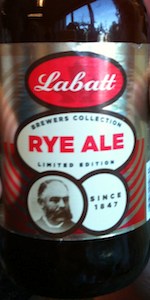 Appearance – The beer pours a light golden color with a big fizzy white head. The head fades quite fast leaving some nice leaves of spider web lacing on the sides of the glass.

Smell – The aroma is mainly of a grainy nature mixed with some caramel sweetness. While shouted as a rye, there is not much of a rye in the grain smell instead it is mainly of a wheat and corn grain like smell. Even though not much rye is present in the nose, the aroma is overall still rather decent.

Taste – The taste begins with a grainy and bready flavor mixed with a caramel sweetness. A little bit of a corn like sweet taste comes to the tongue more toward the middle with the graininess losing a bit of ground and becoming beadier as the flavor advances. While grains were present from the start, like the nose would have suggested it was more of a wheat like nature. Some light rye flavors do develop more toward the end however, replacing a bit of the grainy wheat flavors that were lost from the start. These light rye tastes bring with them a light earthy hop as well as some spiciness. In the end, the mix of flavors leaves an overall with rather corn and caramel sweet and lightly grainy bready taste to linger on the tongue.

Mouthfeel –The body of the beer is on the average side in terms of thickness and creaminess with a carbonation level that is on the very average side. Both are rather appropriate for the grainy, very lightly spiced and hopped, and sweet flavors of the beer and create a easy drinking brew overall.

Overall – While a little lacking on the rye characteristics, the brew is rather decent and quite easy drinking. OK, but nothing too exceptional.

Bought as part of a case of Labatt Brewers Collection Summer beers from Southtown Beverages on 4/26/13. Case price $ 10.99.

poured from a 11.5 oz bottle into a glass tumbler, served at fridge temp.

aroma: pale malty with a touch of fruitiness and a faint spiciness which must be the rye.

taste: broad maltiness with a touch of hops.

notes: very tasty beer. I've never had a rye beer I didn't like. This is balanced and enjoyable. wish they still made it!

Poured into a standard pint glass. Appears blonde in color but emptied the bottle and surprisingly dumped unexpected dregs into my glass. Lots of little chunks floating around. Didn't read anything about refermentation in the bottle so I'm guessing this is a mistake. Does have a white head that eventually fades to a thin film.

No apparent rye character, just a light peppery note. What pepper notes are there are masked by a sweet malt character. Some diacetyl present.

Tastes like pale and/or pilsner malts with an ample amount of hop bitterness at the tail end. No hop flavor. No rye in taste. Really missing any kind of characterful flavors except some sweet base malt with butter & slight cardboard notes.

Overall, this beer is missing on many, many fronts. I'm surprised this is a labeled a rye ale because I get little to none rye character. Even still, this beer does not measure up on any of the other marks.

Poured into a pint glass, color is gold, head was thick at first but dissipated then clinged the glass nicely.

Taste is very neutral, there is a hint of rye spice/earthiness but hard to distinguish; hop flavor is neutral.

Mouthfeel is very crisp, but not sharp, good for an easy drinking beer.

Overall, a sub-standard rye beer, but better than normal macro beer - more rye and a touch of caramel would do this beer some good.