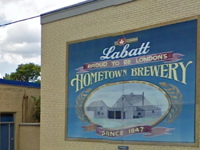 Labatt Brewery makes macro slop for the masses, and their beers are among the worst produced in the Western/industrialized world. I recently took the guided brewery tour with a friend and was left very disappointed. Mainly because the beers on offer - Labatt Blue and 50, Budweiser and Bud Light, Alexander Keith's Red and IPA - were so horrid.

Don't waste your time on the underwhelming brewery tour and crap beer sold at Labatt. Explore the breweries and bars mentioned above and you'll have a much better beer experience in London.

Labatt Brewing Company Ltd. in London, ON, Canada
Brewery rating: 2.6 out of 5 with 4249 ratings