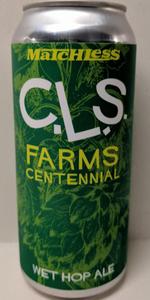 First in my night o' fresh hops.
Pours pretty standard golden amber. Nice size fluffy white head that settles in eventually into small clumps and laces the glass to a gorgeous degree.
Some classic fresh hop elements in here include sweet juices and leans a little more towards the floral and perfume side of things in this glass than I remembered from the previous glasses.
Carrying the same theme forward of freshness that you can't quite define otherways, and similar to the nose I'm getting elements here that I didn't recognize in previous glasses (at least per my memory). As compared to memory, this carries more of a pastel sweet to it that brings forth thoughts of melon (honeydew in particular) and sweet citrus with a steady body and malt backbone that supports without stealing any of the shine of the real star of the show (the hops, duh). Finish carries the fresh-hop goodness and brings it to a culmination of grapefruit bitterness.
Medium body that supports the hops it shows off quite well.
I love fresh hops. I love Centennial. This beer has done nothing to change my mind on either of those fronts.

16oz can purchased at Community Pint, in Spokane, WA, for $3.99. According to the stamp on the bottom of the can, this was canned on "091317." My second take-home edition of a Matchless beer.

Poured into a Mad Bomber IPA glass, this was a very slightly chill-hazed shade of golden amber, with a big, pillowy eggshell-white head. Lots of lace.

Grapefruity, spicy and perfumey nose to this. Initially the perfumey (not confident that's even a word) aspect seems to run wild, but the grapefruit, peppery spiciness, some pine and even a tiny bit of sweet, bready malts come out to play if allowed to warm up.

Citrusy hop flavor leads the taste parade. In the near background are some peppery, spicy notes. It's not particularly bitter. In fact, while there's all sorts of hop flavor, it's a soft hoppiness. I'm guessing Matchless didn't use any dry hops in this for bittering, just a buttload of wet Centennial hops (20LBs worth per the label). There's a very modestly dry, herbal bite at the swallow.

Medium bodied, with carbonation that's a little low for such a beer. Slightly resiny mouthfeel.

Probably the greenest PNW IPA I've had in a while. After drinking this, I feel I can truly say there's a difference between a true wet hop IPA and a fresh hop one (at least when a brewer doesn't front load with a charge of bitter dried hops). Not something I'd session but very flavorful. I'd hit it again in a single serving.

Pours a slightly hazy golden with a good sized head and moderate carbonation. Smell is mild, but primarily hop cones.

Taste is nicely balanced -- not as hop-forward as I would like, but hop forward enough, with a nice malty sweetness to balance it out. Makes for a very tasty, relaxing beer.

C.L.S. Farms Centennial from Matchless Brewing
Beer rating: 3.88 out of 5 with 8 ratings