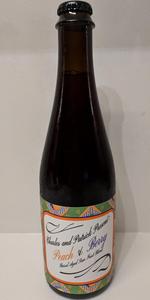 Body is a clean deep maroon, like bad stage blood, or royal cloaks. Fine white foam that has a tinge of the maroon to it as well. It's downy almost. It looks frail like it will dissipate quickly, but it sticks around leaving a good tight cap and decent lacing. I keep coming around to 'regal' as the descriptor I want to use overall.

Initial wave on the tongue carries sweet berry juices in a slow groove that we've all seen before. But then it gets interesting (not that the familiarity I was describing before was not enjoyable... quite the contrary it may have appeared to be heading into well worn grooves, but they're well worn because they are delicious). A uniquely earthy character crashes in in the mid palate, putting a little twist on things. Raspy acridity builds up, and meets the edges of the berry and guides it into a defined woodiness. Wrapped around this is the blueberries which are undeniably themselves. The tart/sour note washes back over through the finish to bring that sour salivation. I don't know that I would necessarily pick peach out if I didn't see it on the label: it does not step forward as bold and defined as the wood and the blueberry and the souring, but I can find it at the edges, knowing it's in there somewhere. It serves as somewhat of the substrate that kind of holds everything together, keeping the bolder aspects from poking out too far on their own and pushing it from wonderfully blended to imbalanced and swingy. And the sweet sticky edges and finish give the peach flavour more play, though it's still fairly subtle and easily overpowered by the other characters around it.
As it warms, the blueberry juice pushes forward and I'm really digging that.

Tight/light effervescence, with a thin body that seems dry, but leaves a sticky feeling after the fact and a lingering sour raspiness.

Definitely digging this one right now.

Charles and Patrick Present: Peach & Berry from Matchless Brewing
Beer rating: 4.05 out of 5 with 1 ratings