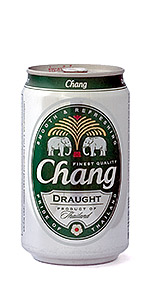 Poured from a half litre can into a plastic cup. Stamped 11 March 2015.

Brief head and pale body. Nose is soap and corn sugar. The beer is quaffable and pleasant in nearly all regards save taste and experience. Malty round and vaguely carbonated and eminently drinkable on warm balconies.

Can from Tops Market in Koh Samui. From notes.

A - One finger white head on a bright and yellowy golden body. Good carbonation. Head gone fast with no retention or lace.

T - Grain, honey, lagery. The colour yellow came to mind for some reason. Not all that great.

O/D - Fairly clean and inoffensive while not being all that impressive. A few off flavours but not terrible. Forgettable is a good descriptor.

A: Straw yellow, pours a huge head which fades to nothing, looking nice and foamy in the 2 minute melting process. Looks moderately carbonated.

S: Smells of malt, hops, ever so slight skunk, like many cheap beers I’ve encountered before.

T: Tastes of malt, skunk, slight sour, slight hops, and a little pizzeria yeasty aftertaste along with a slight bitterness. Some watered down sweetness in there as well. Reminds me of Archa, but not as bitter or unpeasant.

O: Overall it’s a cheap Thai beer. Reminds me of Archa which is also made by Chang, but has a much cooler label. Also reminds me of a typical American Adjunct Lager, even though not classified as such. Its straw colour, malt, some hops, some carbonation all do the trick if you want this. It is refreshing. Nothing spectacular, it does not stand out. But, its a fine beer for washing down Thai food and definitely adds to a Thai experience especially if drunken in Thailand.

sampling all brews I can get hold of during my hols in Thailand ...

not much of a flavor in the nose, but at least refreshing ...

the taste is quite light as well, a sort of ginger ale stripped of all the sirupy sweetness

330ml can poured into a pils glass with filling date on Feb'11 but no detail about best before date.

A:
Crystal clear shiny bright golden color with thick white foamy head that vanishes with decent retention into some sheet covering atop before completely disappearing. Visible carbonation is light to medium.

T:
Taste is clean and rather sweet by crackery malt with a tinge of grain and lightly sour note. No evidence about the existence of hop bitterness.

D:
Pure malt brew from Chang, drinkability is okay but just quite indifferent.

T: Sour, tinge of sweetness and watery. Malt flavor floats in the background.

The colour is pale yellow; the liquid clear. The large white airy head slowly sinks down with a fizzing sound. No lacing occurs.

The smell is sweet with simple yet balanced notes of malt, some fragile bitter notes, hints of yeast and fresh bread. It's more European in the smell than expected.

The taste is quite light and rather sweet. Malty clean flavours with a not-that-fresh bitter flavour with hints of leather and sour dough. The aftertaste got odd notes of wet paper, textile, leather and a sour hint of lemon juice.

The carbonation is medium strong; the fresh bubbles are medium sized. The liquid is semi-smooth.

An OK beer if it wasn't for the rather ugly hop flavours.