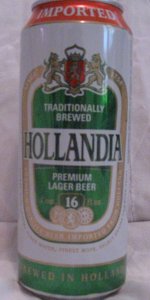 Hollandia is a cheap European supermarket beer, that has now been around in Australia for a few years now, as - you guessed it - a cheap supermarket beer. Whilst beer isn't sold in supermarkets in Australia, it is one of the cheaper options you'll find in branded Bottle Shops around the country. It's moulded in the same market as Heineken, just without the price.

Look: Standard Dutch/German Western European lager look to it. Straw gold, completely filtered, a healthy stream of small bubbled slithering up to the top of the glass, but not bubbling like a spa. Head is a soapy white, very thin dissipates quickly to a think foam on top. Standard for a Euro lager, nothing to write home about.

Taste: As expected, clean, crisp and refreshing. Front of the sip has a nice sweetness, The back end of the sip gives you plenty of hop flavour, not very bitter but enough to be refreshing.

Overall: Despite it being a cheap European Supermarket beer, it's actually not bad value for money. It's got everything I look for in a lager. Refreshing, light, and decent flavour. It's not going to hurt the hip pocket. Actually a decent drop considering it's a industrial supermarket lager. Worth picking up when you just need something to quench the thirst. Would buy again.

The first beer that I can recall, other than beers that are Reinheitsgebot compliant, to actually list the ingredients on the label. The only non traditional ingredient is glucose. My guess would be given that there is a fair amount of residual sweetness to this lager, that some of that glucose is added post fermentation.

Not much of a nose. Some floral, spice and fruit notes, but barely more than a hint. Some yeast aromas, not sure that qualifies as 'bready', but I'm not quibbling. This is a clean tasting beer, with some sweetness and modest bitterness.

One of the cheapest beers available in Australia. Consistent with no obvious faults.

This is my go to beer. It's great value. It's very refreshing without being watery. 4.7% is just right. I do like my dark ales and Porters but this is my session beer or a refreshing beer after a warm day at work.

Not what the discerning taste tester may call a the model pils amongst all the catagories they may grade it by in their wit and wisdom. But it is a descent drink. I give it a 70.

This is a typical Dutch lager. Crisp and clean, a soft bitter bread flavour. It’s not a full flavour brew, but rather a thirst quenching, after work pacifier. Don’t expect greatness, just accept a decent beer that has a purpose.

A clear golden beer that pours with a low head. Not much smell to it, and I found the taste a bit bland, with a bit of an aftertastet.

From the can, it pours a lovely golden color with a large white head that slowly dissipates. In the nose, it is lightly bready. In the mouth, it is lightly flavored. Enjoyable on a hot day.

Brewed with brewers sugar,barley malt, hop extracts and very soft water.
Those facts reveled it's clean character!
Had it cooled to 6c.Packaged in a 50cL can, filled 7 months ago.P date+ ecp date are printed!Very clear and bright golden color.Medium to strong carbonation.Nose picks some malt, biscuit and light grass.Taste is very refreshing.Hallertau hops,roses,,biscuit,pilsner malt is what it tastes.Sweetnes well balanced with bitternes.
Finish is rather short,but clean with zero of flavors exept when beer gets warm and flat.Than, you can taste some soap.
Far better than any other pale lager from Holland.I'ts well matured beer which contributes to it's clean taste.

Zero head on this clear blond beer. Active carbonation makes for a little bit of a show though. 2.25

Smell is industrial lager. I can smell biscuit malts and what I believe to be some sweet adjuncts...corn or rice, I'm not sure which. 2.0

Light and on the sweet end, this beer tastes like a factory beer. It reminds me of so many lagers that are mass produced. The one taste I do get is sweet malts. Not much else. 1.75

I wouldn't call it crisp, but it is something along that line. It has active carbonation,and the feel is definitely lighter. This may be the best aspect of this beer. 2.0

Well, another mass produced beer that we should expect nothing from. Apparently this beer is quite popular in the Caribbean. I have to worry for the beer drinkers there if this is true. 2.0

Im drinking a 14.9 oz can of Hollandia. Cheers! It's not as bold and flavorful as Heineken but it's decent and worth trying out. It's not extra cheaply cloyingly and artificially sweet like some cheap lagers are which is a good thing. Cheers! C

I've enjoyed Hollandia before in the 650ml bottles, in which it's a mild, shallow but pleasant lager with a watery finish, a good cheap quaff for hot weather. Now trying it out of a can and the taste seems more metallic and less immediately appealing.

Also, I'm drinking it straight after several glasses of Boags Draught, and the contrast is quite marked. Boags is a good example of standard-but-decent Aussie lager, medium-bodied, fresh and slightly bitter.

In contrast the Hollandia tastes somewhat stale, "sweet & sour" and with some mushroomy background in there as well.

But it's not a bad drop and does the trick as an adequate heatwave cooler. But buy the bottles rather than cans, and don't sample it straight after an Australian lager - the taste will seem "odd".

Good beer, here in Australia sold by woolies brand bottleos $30 carton of bottles. Great taste decent kick, and here to stay as my daily. Don't understand the weak reviews, if you enjoy craft beers this is one that will surprise you and not destroy your wallet so you can still go and get those Winny Blues. Top sellout beer in Western Australia and we can see why, because there's nothing like a ripper of a beer to get the head spinning and have a bloody good night.

I love this beer. Balanced, light, can be had all day long and you won't get sick of it.

For a buck a can, not to bad. The variety of craft brews is plentiful, try it then move to another.

This a clean crisp easy drinking beer. A nice drink to relax with it's 5% so its an average beer percentage if you just want something normal at a decent price. Has the similar flavor of Heineken or becks but more subtle and enjoyable than Heineken. The light clean taste is reminiscent of Michelob ultra.

Its actually a decent beer and the price is affordable. A very good beer.

First had this beer about 20 years ago, this ain't no johnny come lately to the beer world. Pours straw yellow, quick vanishing white head from 1/3" deep to nothing in .3 seconds. Aroma is slightly skunky, I actually wanted more skunk out of this. Its a big thing I'm into in Euro lagers.

Taste is a pretty bland affair. Mild noble hops, super light malt Americana adjunct lager style. I don't really see this as any more offensive than Heineken is, just less marketing behind it. Its a lager that you've had plenty of times essentially. There aren't really off flavors, its a highly carbonated, low malt, low hop, average strength lager. Taste is driven mostly by some malt sweetness (I thought this was all barley, could be wrong) and yeast, backdrop provided by those noble hops in small quantity.

Look: Yellow golden color. Lot's of bubble moving up. About a finger of head that goes away quickly.

Smell: hops and some malt.

So overall would I recommend it ? Sure its a descent macro beer.

L: Minimal carbonation and a weak head that disappears quickly.

F: nothing of note.

O: had this once before and bought it again for review purposes. Will not be purchasing again. There are better cheap brews to be had.