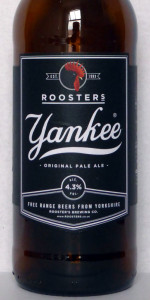 L- Mid gold, clear, pours with thin white head fast clearing to lacing.
S- Smells of fruit and saw-dust.
T- And tastes similar, into a hoppy-dry finish.
M- Maybe this kind of challenge is something hipsters enjoy, but it's lacking and unbalanced to me.
O- A curious thing. It's prominent notes come from and seem to incoherently go nowhere. I don't know, a beer with overtones of melon or similar; not for me. I can finish it but won't buy it again.
BB: Hard to read 29/1/2020?

Found in a can at a supermarket (Waitrose), it is my good luck to find an innovating brewery's cash cow and multi-award winner with staying power over 25 years.

Yankee doesn't Look the average EPA (more blonde than pale.) But its Smell tells me mostly malt. It Tastes balanced, albeit a bit more bitter hops than characteristic. But that is all good as it sits in my mouth fine.

Reviewed in Roger Protz' "300 Beers To Try Before You Die!"

Can poured into tulip.

Pale yellow/orange. Small white head. Smells floral and malty. Crisp character. If someone told me that this was a wheat beer I’d believe them. Not a pale ale as I understand the style. Refreshing enough but not particularly to my taste.

Gold in colour with a chunky white head. Slightly bready but has a nice Turkish Delight floral flavour. Also quite a bit of tea and that butter scotch quality.

330ml can poured into a chalice glass

Look: Deep, golden yellow - no sediment to speak of and a head which disappeared almost as the beer was being poured. Plenty of bubbles, but nothing much left after pouring except a very thin surface layer and some foam round the edges of the glass.

Smell: With the wind in the right direction you could smell this miles away, but in a good way - it has a lovely grassy, herbal aroma more in line with some of the more aggressively hopped American IPAs but after a little while it's tempered by some citrus fruitiness and the faintest hint of roasted malts and spice.

Taste: Follows the smell, more or less - there's definitely an in-yer-face fruitiness followed by a mixture of hops and malts. None of these flavours stick around though - the taste is definitely in the 'blink or you'll miss it' vein. This is an extremely tasty beer, make no mistake, but the flavour profile lacks staying power.

Feel: Decent enough body, fairly malty up front and then the hops kick in - extremely refreshing, I drank this immediately after coming back from a walk and as such it makes an ideal post-exercise beverage.

Overall: The canonical session beer? Quite possibly - it manages to be good without being truly outstanding whilst at the same time being extremely refreshing and eminently drinkable. It's definitely better on draught than in a can though, and I'd recommend trying it on draught before passing judgement on it. Good, solid session beer.

330ml Can from Good Spirits Co, Glasgow (£2.20):
Not a bad beer at all and one that started to grow on me a little as I worked my way down the can. As expected it was quite bitter and hoppy without really matching the heights of some of the more recent pale ales and IPA's but it's certainly not bad for a beer that was first brewed over twenty years ago. It packs in a lot of flavour to its 4.3% as well but still proved quite an easy beer to drink without being one that you'd be likely to go out of your way to pick up again.

Overall - An excellent brew from Roosters and lives up to all i've read about it... recommended...

A 500ml bottle with a BB of Feb 2014. Purchased a while back from Trembling Madness in York. Described as a pale ale with US influence; hopped with Cascade.

Poured into a tulip pint glass. A clear golden hue with medium carbonation. Yields a decent head of white foam that lasts for a minute or two before subsiding. Aroma of light, grainy malt, floral hops, a hint of citrus and fruity ale yeast. Slightly musty overtones.

Tastes of light malt with a dry, leafy finish. Notes of grain, faint caramel, floral hops, mild citrus, fruity ale yeast and a hint of cardboard. Well-attenuated, followed by a delicate bitterness upon swallowing. Mouthfeel is smooth, tingly and dry, with soft carbonation and light body. Slightly astringent, accompanied by an aftertaste of grain, earthy yeast and faint floral hops.

Decent if not outstanding. Looks OK, with an aroma and flavour of floral hops and grainy malt. Some faint off-notes detract from the aroma - perhaps this has been sitting around too long? Decent body for the style. Refreshing and very drinkable, but probably best when fresh. Worth sampling if you come across it.

Coming in a 500ml slim brown bottle, not bottle-conditioned; BB 16/04/2014, served cool in a straight imperial pint glass. Notes: the back label describes this beer as “A dry-hopped version of one of the original, new-style, pale ales to be brewed in the UK… [showcasing] the floral and citrus fruit aromas of the cascade hop (grown in the Yakima Valley in Washington State, USA) projected against a back drop of soft Yorkshire water and Golden Promise pale malt”.

A: dark golden in colour, coming with very restrained carbonation and a dissipating off-white beer head.
S: the sweet floral & acidic citric aroma comes on a par with quality, “clean” pale malts with a touch of corns, as faint salty mineral-ish notes stays consistently on the fringe.
T: effervescent, clean, the foretaste is immediately juicy-hoppy yet underlined by a very clean and lovely pale malt body; the zingy bitterness soon reveals in a rather “evolving”, than crude and harsh, manner, leaving floral undertones to linger in the finish, where the lightly salty-mineral-ish flavour mingles well with remnant flavours of semi-powdery grainy-malts.
M&O: clean on the palate, smoothly carbonated, medium-minus bodied, this flavoursome hoppy pale ale is far more like one’s CAMRA-defined Blond Ale than an American Pale Ale , probably to do with the lighter body endowed by the Golden Promise pale malts. Interestingly balanced, quaffable, a successful session ale all in all.

O: Wonderful real ale. My drinking buddy swore that it smelled exactly like an ex-girlfriend's perfume: Victoria's Secret Lovespell. I don't know about that, but it was a hugely aromatic, floral, perfumy brew. Maybe I'm biased, but I'm finding with some regularity that all my favorite English real ales just happen to be brewed with American hops. Great stuff.

Simple square laminated paper pump-clip that has the words Yankee ABV 4.3% in a parched red earth color running across a dry looking desert background stuck onto the serving Handpump. One of Roosters regular brews and an old favorite of mine.

Appearance: A Prince of Ales, straw colored body that sits under a perfectly formed 1/4" thick white head. Supreme looks in the pint Glass, definitely benefits from a Sparkler, I don't care what the Jessie Southerners think.

Nose: Smacks a floral hop punch, Sharp aroma of spicy and crisp clean hops in the aroma. Fruity on the nose  smells damn good I can tell you.

Taste: Fruity hop start, clean, crisp, refreshing. The malt is there but it is in the background, it knows that it is merely a supporting role to the more important hops and whilst it never interferes it does lend a solid base. Damn fruity, floral in the middle and with a lemony bitterness in the finish. A real change of pace from the more malty English Cask Bitters, and one which I appreciate more since moving to the US. Bloody Good Stuff.

Mouthfeel: Rolling carbonation builds in the glass under the head as the Pint glass is replaced on the Table. In the mouth, the same thing happens every time I took a mouthful. Soft yet firm in its feel, the hop fee on the cheeks is floral.

Drinkability: Gone in 60 seconds, literally. 4.3% is still pushing the envelope for a UK session beer on Cask, yet the additional strength allows the fruity nature of the hop-bitterness to excel. Dearly loved, I have fallen foul of a Gallon or more of Yankee several times, dangerously drinkable!!

Overall: Outside of the UK, Sean Franklin is not as well as known as he should be. I first sampled Franklins Bitter (from the Brewery that still bears his name) many years ago and his rather unique approach to the use of foreign and old style English hops in UK Cask Ale was a refreshing kick in the balls. He since moved on from Franklins Brewery and set up Roosters Brewery in 1996. Since then the self proclaimed hop devotee has helped in transforming the face of the traditional English Bitter into something exciting and truly marvelous. His use of American hops is perfect, stupendously fruity, floral and bitter; the balance in the Yankee is always in favor of the hop yet never overtly so. But dont think for one moment that this is a US West Coast Hop Bomb; it isnt, far from it in fact. It is however, a perfect marriage of the American Hop with all of the traditional qualities of an English Cask Ale. Simply put; this is a fantastic Session brew that is untypical of the more malty traditional English Bitters yet sets a standard for the many straw colored hoppy brews now found on Handpump in the UK.

One of my all time favorites, and a must sup recommendation if seen in your local. A superb eclectic English Cask Ale that benefits with a solid American hop influence delivered from one of Yorkshires best Breweries.

*Edit: Forget this one on gravity at Beer Festivals, or even from the Handpump in the South of England - you need to sup this in the North of England and have it from a Handpump with a Sparkler fitted to get the best from this one.

Had this beer in York at the Ackhorne pub. I do not recall this beer being served colder than normal or I would have noted it at tasting time. i will say that i enjoyed this beer a great deal. Lager like pale gold is a bit off putting at first, however the thick white head left patterns of intricate lace. Citrusy aroma with some malt wafting up as well. An exceptional tsting ale with citrus dominating. Some grapefruit is most prominent. Other unidentified fruit flavors would pop up here and there. A different, refreshing, and drinkable ale. I don't get the negative reviews here.

Cask at the White Horse. Surprisingly served cold, not quite ice cold, but pretty cold, i want my English Cask ales warm goddamit, i thought a legendary pub like the White Horse would serve it a the proper temp! Aside from this, this beers pretty light, floral aroma, fresh, light citrusy hops, refreshing, but lacks character. Easy drinking.