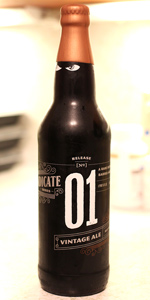 Poured into a Fremont small snifter. Pours a very dark mahogany brown, appearing opaque in the glass with a fine one finger light brown head with great retention and thick lacing. Aroma of dark toasted malt, bourbon, milder influence of dark stone fruit and hops. Flavor is dark toasted malt, bourbon, plums, oak, milk chocolate, mild caramel and a slight tartness and aged hops in the finish. Medium bodied with good mouth feel. A well made strong ale. At this stage in its life, the stout and porter are the dominant flavors, but the fruit from the barleywine lightens the dark malt. I regret not trying this right away as the hops have faded to a dull bitterness with little herbal quality and I'm not getting the intended influence of the IPA and red ale components. Still a flavorful, big and classic American strong ale that has held up to aging very well. I liked this a lot and will try the next iteration on release if the new owners revive this series.

Smell: Caramel, chocolate, and a hint of vanilla.

Taste: Roasted dark malts, and chocolate, from the stout and rich caramel from the barleywine; a nice blend between the two

Overall: A nice hybrid that makes you wonder why more brewers don't try this

I received this bottle via trade as an "extra". Thanks to my CA trading friend! This one really surprised me and in a good way (based on previous reviews).
The beer pours with a bit of a lacing and close-to-black appearance.
Poured into my trusty tulip glass, I was greeted by the unmistakable smell of bourbon and chocolate. Totally surprised in that I would be hard-pressed to distinguish this smell from that of BCBS. Really nice!
Then a few sips and the semi-BCBS comparison continued. Very bourbon-forward and just a bit more back-end bitterness than BCBS. But extremely enjoyable.
Another difference is that this brew is somewhat more carbonated and cuts the inherent sweetness of the bourbon.
Bottom line: I really enjoyed (or am in the process of enjoying while I write this) this retired blend from Speakeasy. If you can locate a bottle it is highly recommended.

Already consumed a few of these through the months....time to review.

Pours an almost black brew with a nice sized beige foamy head that laces all over the place.

The aroma is great. Barleywine sugars flow alongside the chocolate/cocoa whiffs and some marshmallow. Caramel and brown sugar round it. out. Really nice smelling brew.

The taste is a hybrid BW and Stout. I get all the combos going into this, but the predominate flavors are the BW and stout. Not a ton of booze here even the ABV is big. More BW flavors are present, but overall this is a great blending brew. Nothing off-putting.

Overall this was a fantastic step into the blending series for Speakeasy. They really nailed it as I can attest to (luckily) drinking a half dozen of these. The blends work well especially for the number of brews combined to form this. Somebody knows what they are doing there and I look forward to #2. Very good beer!

Smell - Bourbon. Caramel. Oak. Bourbon is the most intense aroma.

Overall - Like many other blends, it's nondescript, but flavorful. Bourbon, caramel, and chocolate.

Thanks to cquiroga for sharing this one at GRG1313's tasting.

Pours an almost opaque super dark brown with a foamy khaki head that settles to a partial film on top of the beer. Small streaks of lace form around the glass on the drink down. Smell is of dark roasted malt, cocoa, vanilla, bourbon, and wood aromas. Taste is much the same with cocoa, vanilla, and bourbon flavors on the finish. There is a mild amount of roast and wood bitterness and an alcohol kick on the palate with each sip. This beer has a lower level of carbonation with a slightly crisp and medium bodied mouthfeel. Overall, this is a very good beer that is a tasty blend of beers that don't seem like they would necessarily work well together.

a: very dark brown, light, light brown head. Looks like a strong ale. If it were darker it'd be a stout, but too much light getting through.

overall: Big nutty flavors, big bourbon, almost no alcohol fuels. This is truly amazing. A must try. I will grab this again if I find another bottle.

Appearance- Pours up an okay amount of head which has some retention. The head is medium beige with tan notes while the body is an opaque, dark chocolate black. Some spots of lacing. Lacing turns out to be fairly decent.

Nose- Starts off with vibrant notes of coconut which I always take as a good sign. The glass shows some raisins while the bottle has background notes of chocolate and raisins. Swirling shows a little bit of caramel and a good amount of prunes.

Taste- The coconut doesn't have the presence that it does on the nose but a nice and fairly deep chocolate comes in to replace it. Notes of raisins, cherries, and plums. Noticeable heat with some wood, mostly oak. Caramel that has some toasted qualities. Light coconut. Starts showing vanilla and toffee as well. Maybe a little too much heat. It also seems a little thin on the finish. Some types of wood other than oak. Almost some earwax bitterness. Fairly complex with good balance and integration. Good presence as well. Reminds me a bit of a lesser Bois. Good to really good beer that probably isn't worth 15 dollars. I think they should keep up with this series because I think they will end up making a pretty memorable beer if they do. This is really just a note off from being a really good to great beer. I think aging some of the beers used in the blends in Pinot Noir barrels might accomplish this. Some coffee and roasted notes start to come out with some brown sugar and molasses.

Mouthfeel- Medium bodied with a little too much carbonation. I would prefer it to be thicker and less carbonated.

Drinkability- Some oak, some heat but nothing that is really an obstacle. Probably not worth 15 dollars but I could see it coming into its own.

Overall- Good to really good beer that I think Speakeasy should keep working at. Definitely worth a try unless 15 bucks is a bit much for you. It's not worth it but perhaps, one day, one of the releases will be.

A- It's darker than I would have imagined being 50% barleywine. Almost black.

S- The first notes I got where chocolate and bourbon. Coffee, smoke, leather, tobacco and a musty almost off putting funk followed. It's definitely an interesting nose that offers new layers with every sniff.

M- The drinkability on this one is nearly perfect.

O- I like this beer a lot. I think they could improve it slightly, but overall I was really impressed. Great job by a brewery that's been around a while now.

Poured from a waxed bottle into an oversized wine glass. Pours out near black with milk chocolate edges. Starts with about a third of an inch of head. Mild lacing.

Melted chocolate, oak and booze dominate the nose! Vanilla rounds out the middle, with a slightly earthy end.

Smooth chocolate, dry oak, vanilla and a bit of caramel are just the start of the taste. Bourbon and grass make up the middle. More dry oak at the finish. Very smooth going down, not much bourbon heat with the taste.

I need more... to cellar! Great brew from a mediocre brewery (sorry Speakeasy, just my opinion.)

Pours a deep mahogany with a khaki or off white head. Aroma is of bourbon, caramel, vanilla, oak, and a slight chocolate/coffee roasted note. Taste is bourbon up front with a caramel sweetness on the middle of the palate that takes over. Huge dark fruits pair with the caramel notes and give way to more bourbon on the back end of the palate. More sweetness with a lingering astringency/light bitterness carry over. The mouthfeel is in medium to light, not sticky or thick. Very reminiscent of the bourbon characteristics of Backwoods Bastard with more complexity from the the stout, porter, and double IPA contributors to this blend.