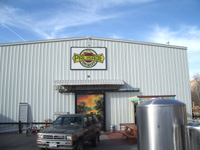 Stopped here to get a cold ale on a trip through the area. The Porter of Love was very good. The red and imperial stout were equally as good. The bartender was full of knowledge and very nice. I wasn’t a local but was treated with respect and the service was great. I would definitely return.

A-We stopped by on our way to Fruita on a nice May evening. The large patio out front was nearly full with a mix of locals and tourists, but the place didn't feel crowded. The building is a nondescript metal warehouse (nothing special to look at) and the interior area is small with a small bar, a popcorn machine, and a decidedly do-it-yourself vibe. Nothing cutting edge here, but the atmosphere was more lively than the town, which was dead quiet.

Ser-The staff was friendly and we were served immediately. I didn't do too much digging on beer knowledge, but the bartender offered up her opinions on which beers she liked and didn't like, and why she liked them. Our food came out quickly too. Beers were served in shaker pint glasses.

Sel-In this day and age, it is tough to compete with breweries and taprooms that offer 12 or more choices of sours, stouts, hoppy beers, etc. Palisade only had 6 beers on offer, including three different variations of an IPA (a session, a regular, and a double). I guess that IPAs sell, but it would be nice to see Palisade broaden the spectrum a little.

V-Prices for beer were better than "resort" but still on the higher side. Food prices were quite reasonable.

F-Palisade offers free popcorn and selection of BBQ sandwiches. I enjoyed my BBQ sandwich and cucumber salad. It isn't anything fancy, but I ate the whole damn thing and would it again.

O-Palisade is a nice small-town brewery with decent beer and a cool, laid-back vibe on the patio. The indoor space is a little rough, but the patio is definitely worth a visit if you're in the area and looking for a beer and a bite.

kind of a scary experience. accidentally went into the peach street distillers place just up the road and finally found this place down an old industrial road. the place looks like an old warehouse from the outside, and once inside has a small bar that opens into a big aluminum structure. a few disgruntled trucker types at the bar, eerily quiet, strange vibe. could be cool if it was hoppin, but it wasn't. good selection of beers on though, and we enjoyed our tasting flight quite a bit. nothing standout or world class, but all were palatable at the very least. free popcorn too, which is always nice. beers were cheap enough, and we would have stayed longer but the emptiness of the whole thing started to creep is out a little so we got back on the road. this is a place that needs revisiting, so I will be sure to stop back in next time though to reevaluate, maybe just caught them on a slow night or whatever. like all Colorado small town breweries, this one is worth a shot if youre in town.

This is the former Palisade Brewery, now known as the Palisade Brewing Company.
I originally heard they were picking up the older beer line-up (like Red Truck & Farmer's Friend) but that doesn't seem to be the case...or at least not yet. There are different styles, and definitely different flavors for the moment.
The facility is in a huge warehouse-style building with a patio (w/ misters) out front. It's also partially connected to the local distillery to make for a pretty nice area to hang out in the evening.
Inside the warehouse is a small bar where you can order beers, BBQ, quesadillas, and a few other snacks. There's also a popcorn machine. I didn't have the BBQ, but it looked and smelled good!
You can see all of the brewing equipment inside and there are booths and tables spread out right in the middle of the main brewery floor.
On to beer. Right now they have Rusty Wire IPA, Laid Back Blonde, Colorado Desert Amber, Gatling Gun Brown, SOB Pale, and a Dark Wheat. I believe they also have a few guest bottles as I saw a Cantillon bottle (pretty unusual!) and one from Boulevard, too. Beers are available in 3 sizes and prices weren't bad at all. 10oz beers were $2 during happy hour, which is a steal.
Beers were good, but a little tame. Nothing really stood out as being outstanding, and I really like the older Palisade beers that are still out and about in bottles...but aging rapidly. Nothing equaled Harvest or Red Truck, which was a little disappointing, but perhaps worth revisiting in the future. The brown was okay, the IPA seemed to be missing big juicy flavors I was expecting, although the amber was solid. The dark wheat was using a normal wheat ale yeast and therefore ended up a bit boring. Apparently they're looking at keeping the operation VERY local as far as ingredients, which is an awesome idea.
The facility, idea, and everything about this place has the potential for greatness, but I'd say the new beers aren't quite there yet. If they can recapture the older stuff, this place will definitely be a must visit. Right now I'd say it's still got plenty of room to grow.
I'll probably revisit this review in a few months once the brewing operation has had some more time to get "broken in."