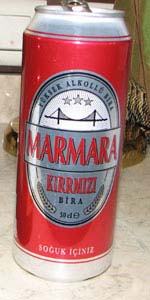 Notes:
View: Beers
Reviews: 6 | Ratings: 13 | Log in to view all ratings and sort
Reviews by Offa:

This is a decent beer that seems basically just to be a malt liquor to me and is the weaker cousin of Efes Extra from what I can see.

Orange-gold, it has a thin, fizzy white head soon shrinking to nothing.

The taste is very light, rather bland, with alcoholic grape juice and faint grassy element. It's lightly sweet with faint bitterness and a general, light, vague slightly alcoholic "beer" taste. It's inoffensive and reasonably easy to drink but that's about it.

My maternal uncle was on a two-week sightseeing junket to Turkey recently and brought this CAN back for me. I CAN hardly believe how The CANQuest (TM) has grown.

The Crack & Glug came off without a hitch, producing two foamy fingers of bone-white head with decent retention. Color was a pretty sunshine-yellow with NE-quality clarity. It looked like liquid sunshine in my glass. I could smell the corn as soon as I began pouring it out and it was right in the acceptable range for an AML, but that was about as much good as I CAN say for it. It was kind of watery in the mouth and it had a metallic tang on the tongue. Oof. Man, I was thankful that it had a relatively low ABV or I may have poured some more into my uncle's glass when he was not looking. I hate to look a gift CAN in the pop top opening, but one of these was plenty!

A: Pours a light yellow orange hue with a nice light fizzy white head. Light retention and no lace.

D: Not the best beer I have had in Turkey. One I will pass on in the future.

Red 50cl can, poured into a pint handled glass in my hotel room (Ovacik, Turkey) during a hot weeks holiday in July 2010.

The yeast strain Efes must use on all its beers doesn't seem to show it's self in any other brew except this one. I thought the smells from this beer to be yeasty and malty.

Regular Efes golden coloured beer, this one however was slightly over carbonated and very lively.

The beer was dry and had a citrus feel to it, more so than the regular Marmara anyway. A bitterness came as the mouth dried in the aftertatse, not unpleasant or metallic like some lagers/pilsners produce.

I thought this one of the better beers found during my week searching out Turkish beers.

Sweet malty grain/grape/grass in every aspect, which is to say, a decent Efes beer. Some metallic taste. I find that the mouthfeel is almost soapy and way too insubstantial, but it really doesn't taste bad--I might drink it over Efes Extra? I'm not sure.

Can from a corner shop in Istanbul. Cost was 6.5 lira. Reviewed from notes taken in May 2016.

Not metallic, at least. But not the most drinkable budget brew. Too thick and filling.