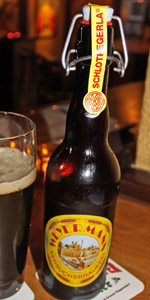 Poured into a small tulip glass, it was a deep, dark brown, dense and opaque. Head was a 1/2" of creamy fluff, tan in color, and it left nice lacing. A decent amount of smoke was present in the aroma, being neither subtle nor overpowering. Body was solid, mid-range, and presented nothing rough on the tongue.

A light touch of sweetness was found, with a bit of caramel. The rauch came on well, again being a nicely balanced amount. Lightly floral at the finish, it was quite dry as well. Solid and sessionable. Prosit!!

500ml swingtop bottle acquired at the Weyermann pilot brewery "fan shop" after an English language tour of their malt roast production process. Cost was 2.50 Euro plus 2.50 pfand (deposit), which is rather steep by Bamberg standards. Served into a .3l halleroder bierkrug at me friend's gaff in Bamberg. Reviewed live. I tend to love rauchbiers, so I'm excited to try this one.

T: Roasted malt, bacon, cream, and some nutty hops on the fringes. I'd like more bacon; it's a bit tame for what I've come to expect from rauchbiers, but pleasant nonetheless. A bit of chocolate and toffee enters in on the climax. It's a two act beer, with no real open: just the body/climax and the finish. This structure may be simple, but it works for the beer. The balance is maintained and it remains well-built.

Mf: Far too smooth for a rauchbier, but also too dry, which is a sort of push-pull feel that doesn't resound with the flavours and doesn't resolve satisfactorily. Instead, you're left with an awful dryness as an aftereffect. There's no wet open to curb this effect, which is unforgivable.

Dr: The mouthfeel just doesn't match the flavours of the body, which are themselves quite nice. It's steeply priced by Bamberg standards, but could be a much better beer if they'd only fix that damn texture.

Weyermann Schlotfegerla from Weyermann Brauerei GmbH
Beer rating: 3.64 out of 5 with 8 ratings