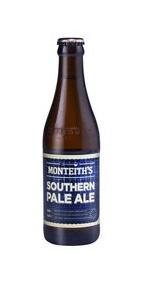 A 330ml bottle with a BB of Aug 2017. Purchased recently from Home Bargains.

A: Poured into a tulip. A rich amber colour with good carbonation and some faint floating sediment. Forms a decent head of creamy white foam that lasts for a moment or so before dissipating to a patchy surface layer.

O: Meh - pretty dull fare. Looks OK, while the aroma and flavour are mild, malty affairs. Typical body for the strength. One would expect a pale ale to have a tad more hop presence than this; aside from some light grassiness in the flavour there is almost none. Unexciting - no need to hunt it down.

330ml Bottle from Home Bargains, Glasgow (£0.69):
This one was a truly terrible beer and one that I barely got close to finishing, it was just far too skunky and basic tasting with a terrible balance and very little in the way of flavour. There was some cheap malts and basic adjuncts with some corn and hints of grassy flavours too but nothing that made the beer interesting or drinkable; it was all over the place really and in hindsight it makes sense that it was so cheap. Definitely a beer to avoid.

Taste - 4 | Peach, orange, a bit of grain, a honey sweetness, a slight bitterness of a citrus fruit pith appears at some point then slowly fades during the finish leaving a grain and honey.

Notes - Refreshing taste, with good complexity and a lower ABV makes this a beer I see myself sipping during a hot summer day, maybe at a BBQ.

Copper color, clear. Foam average high, quite durable, fine-bubble.
Aroma: very weak, light notes of honey with orange, some white bread.
Taste does not bring anything more, light touch of white bread, honey mixed with a touch of orange and spices.
Bitterness is low, short, medium towards saturation to high.

Clear golden color with off-white head. Aroma has a slight hoppiness with citrus fruit notes. Taste starts with grainy/bready malts and finishes slightly bitter and hoppy. Medium to light body with good carbonation. Not bad but the flavors are really faint and overall it's quite boring.

Monteith's is a NZ brewer that has lately been slipping into the clutches of mediocrity like so many other once decent craft brewers, and Southern Pale Ale [spoiler alert!] is no different from 150 Lashes, Minimum Chips and many other beers out there diluting a world class beer pool with their complete unnecessariness (is that even a word? Spell check thinks so). I’m not really sure who the target is for bland beers with nothing going on but once craft/now macro brewers keep introducing them to an oversaturated market so there must be people who think “Corr blimey this is a good drop!” not sure who these people are but whatever Monteith’s/James Squire/Matilda Bay, you go do what you have to.

A: Presents a clear light amber body with a foamy white 1 cm head... looks like a standard macro Lager/PA - nothing special here... I’m so bored with this beer already, tempted to tip it out and get a nice rich Stout in my glass. 6/10.

S: Aroma is a hybrid of a Lager with grassy/grainy notes and a Pale Ale citrus hint - but it smells artificial - like some added lemon essence. Not much else to note with the aroma so let’s move on and get this sorry affair over with. 6/10.

T: Yep, lemon, grains, a hint of grassy character thrown in - tastes more like a Radler than anything else, certainly wrong for a Pale Ale, but then again what passes for a Pale Ale these days is beyond me - every second beer I see in the pub is a “Pale Ale” now, seems synonymous with how the term “Bitter” is used in Australia to represent a cheap macro Lager. 4/10.

D: Why did Monteith’s even bother to make this average at best beer is beyond me, I know I used that turn of phrase earlier “beyond me” but it’s hard for me to understand why perfectly decent craft brewers have begun releasing watery flavourless beers, they seem to have lost their way but its endemic across the board with many other decent brewers doing this. My only hope is that my negative reviews will reach other brewers and maybe, just maybe, these crap beers will stop being made... not bloody likely but I will continue to hope (and tip these beers down the drain after I’ve reviewed them). 4/10.

Food match: It’s difficult to be enthused by a beer this boring... sooo chips.

From bottle, Smell of light malts, floral hops, some spices. Light sweet, some floral hops and honey, Moderate bitterness. Not to bad it is drinkable.

Appearance: pours out a standard amber colour with fine carbonation across the profile. A finger of white head jumps up and settles to a thin cap. Decent lacing down the glass. Looks reasonable.

Aroma: a strong aroma of passionfruit and lemon zest. I'm not sure where the nutiness is that Monteith's says I should smell.

Taste: passionfruit and lemon - that's the show. Quite strong in flavour, but very sweet without anything to back it up.

Aftertaste: still sweet in the aftertaste, not really much to accompany it.

Mouth feel: light to moderate in feel with a carbonation that brings through just the sweet fruits. I like both notes in beers, but they have to have something backing them up. They are too artificial tasting in this beer.

Overall: another not-very-good beer from Monteith's to add to the list. It is dominated by sweet and artificial lemon and passionfruits, without much else. Not good for AU$58 a case either. Typical Monteith's.

Southern Pale Ale from Monteith's Brewing Co.
Beer rating: 74 out of 100 with 32 ratings