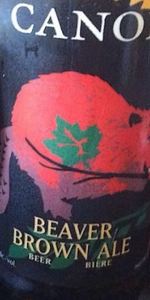 Although it doesn't advertise it, this brown ale does in fact have stupendous pecan coloured highlights and even a little clarity. Both of these features, however, are overshadowed (literally) by the sooty, black marble face it puts forth except when being held into the light. The beer's surface is flat as an ancient map of the earth and shows no signs of picking up.

Despite that it has a very Canadian name and hails from a very British-influenced city, I was secretly hoping that Canoe Beaver Brown would air on the American side of the style and the aroma assures me that it has, at least somewhat. A good deal of coffee-ish malt is pronounced and roasted, smoky notes take precedent over sweetness (and water minerals).

Beaver Brown lacks the hard sulphates and bicarbonates that come equipped with English water as well as the sweeter, biscuity, toffee-like flavours of English malts. Nor does it have, however, the gritty bitterness and over-the-top roast of American examples of the style. It has traces of all of them, mind you, but in far more temperate and subdued proportions.

If someone orders a brown ale, it's safe to assume they're after a heavier, maltier, more flavourful beer and on these details Beaver Brown avails. A good serving size of judiciously roasted grain tastes infused with notes of coffee and dark chocolate and contains a sweet, praline- or pecan-like nuttiness that warrants its own ice cream flavour.

Typical of so many Canadian offerings, Canoe Beaver Brown Ale is too tame for American palates but too bold for British ones; it borrows elements of each culture to create, not a distinct one of its own, but rather a cautious, measured style that can really only be defined in contrast to the ones that influenced it. Still, that don't make it a bad beer! Not at all. In fact, this has been one of the better brown ales I've had in some time. An easy recommendation.

The pint looked really good with its deep purple brown colour and a finger of foam. The smell was a mix of smoked meat, chocolate and candy, good lacing. The taste had a strange kind of barbecue smell. Smoked and burned. For a while I sat at the bar and contemplated if they were using hickory chips in the brewing process. But I guess it's the roasted chocolate malts that does it. It's supposed to be a brown ale and it's very brown, even bordering on stout. Not totally together yet.

On-tap at the brew pub.

Wow! I bought all the bottled ales from Canoe on my recent weekend trip to Victoria and this is the first one I tried. I am impressed.

Very dark for a brown ale: a deep mahogany with a light tan head that is thin, but clingy. The scent is chocolate, malt and brown sugar. I can detect chocolate caramel, the Kraft kind that comes in clear plastic wrappers. Very pleasing to the nose.

Taste is malt, faint nuttiness, chocolate and caramel. I can taste a bit of hops; initially I would call this a dark mild, but the hop presence is perhaps to great for this.

This is a great brown ale, possibly the best I've ever tasted by a BC brewer (with the possible exception of Spinnaker's). Everything here is well done. Why didn't I buy two (or three) bottles? It looks like a return trip to Victoria is needed....

I must of missed this beer on my last trip to Victoria but my father brought a bottle back and I am amazed at how good this beer is. Dark brown with a nice head , the nose suggests dark malts and chocalate. The taste has to be the most chocolate esters ever in a brown ale. This is so rich and full of flavour that I suggest that this might be BC's best brown ale. This came under my beer radar as so is a great surprise.