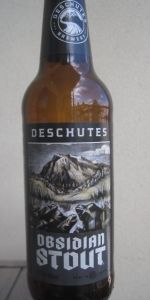 Notes: Deep, robust and richly rewarding, this is beer to linger over. Obsidian has distinct notes of espresso, chocolate, roasted malt and black barley, with just enough hop bite to cut the sweetness.

Obsidian is an apt description: dark, opaque, a persistent cappuccino froth for a head. Then I start to get disappointed. The scent is slightly over-hopped citrus and coffee, and the taste only enhances the citrus.... and keeps enhancing it as I drink. Over-carbonated going down, this is not the stout I was looking for.

Very nice stout with coffee and dark malts up front. There is also some sweetness mixed in and a light bitter finish. It is an overall pleasant offering that is easy to enjoy.

12 oz bottle packaged pretty recently.
Colour is black with white head. Looks like a good stout.
Smells of roasted malt with coffee notes.
The taste of this is really interesting. It's cool how Deschutes stouts all have the same sort of malt character. Kinda reminds me of The Abyss. Roasted malt, coffee, and an interesting kind of spice at the end. Bitterness at the end from hops, very cool overall and really drinkable.
The feel is full bodied and nice.
Overall, this stout is amazing for something that can be picked up for relatively cheap in 6 packs. Deschutes hits again

This might be the first time i tried this beer.
Poured from a 12oz bottle into a pilsner glass. Half-finger head when poured with good lacing on the glass.
Color is black-brown- opaque.
Aroma is inviting; roasted maltiness, coffee, and a hint of chocolate.
Taste of rich coffee, roasted malts, and some chocolate in the very back. There is a nice bitterness that permeates the palate while drinking this beer.
Mouthfeel is my favorite part- smooth and bitter at the same time like a 'black IPA'.
Overall, this is a really satisfying beer; straight forward roastiness and coffee bitterness, little bit smooth, followed by a clean, crisp finish.
I love everything I tried so far from Deschutes- there is a attention to detail and making beer that is satisfying from start to finish. Well done!

Taste: Follows smell. Sort of sweet and malty in the mouth, far more of the coffee bitterness in the aftertaste.

Nice combination of flavors. Almost like a sipping beer to detect them all . Ideal for all seasons. I prefer it to the very similar Black Butte Porter also offered by Deschutes.

Tastes like black coffee and cocoa with a bitter hop bite upfront that lingers.

A delicious stout that hits the expected malty notes with an unexpected hoppy bite to balance it out.

Look: Jet black on the pour with a generous two finger light brown head that pillows up, slowly settling and leaving behind great lacing
Aroma: Roasted barley, dark chocolate, wafts of cold-brewed coffee, light nuttiness, and dark bready malt
Taste: A huge hit of baking cocoa and roast slams the tongue soon followed by silky waves of coffee and lightly roasted nuts (filberts, chestnuts). More dark malt and breadiness stand out in the middle along with a little earthiness and closes with more roast and slightly bitter and rich chocolate
Mouthfeel: Silky smooth, full bodied, a little sharpness at times from the dark malts, hops, or carbonation, and a soft, smooth finish
Overall: This is ridiculously good and in my personal opinion, these folks’ best beer of everything they have in their solid lineup. An outstanding smooth and bold stout that hits all the right notes and is extremely difficult, if not impossible to find a flaw in. A beer that I look forward to each and every ‘cold season’ and a staple in the beer fridge during that time. The gold standard and quintessential PNW-made American Stout. Tasty and highly recommended

I cleared out one of my favorite beers of all time, Abyss (2019), and so I thought I would try its poorer cousin. Not bad. Would make a good regular every day beer.

Black appearance with just a hint of brown. Head was as expected, lingered around for a few minutes. Aroma was malt influenced with only a small whiff of coffee. Taste was well rounded, but finish overly dry and bitter for my taste. Texture was light for style. Overall good stout. 6 pk was $9.99 + tax.

The small folk may call it dragonglass, but the maester's know it as Obsidian

Black with a thin tan head

Delicious. Just enough hop to cut the sweetness as they say in the notes.

“A servant approached. “Bread,” Tyrion told him, “and two of those little fish, and a mug of that good dark beer to wash them down. Oh, and some bacon. Burn it until it turns black.”

A-black as obsidian stone, thus the name
S-roasted nutty aroma
T-dark fruits like fig, average sweet and above average bitter for the style.
M-Medium body. Seemed to be heavier on the pour than on the palate.
O-simple sold straightforward

Was coffee brown in color with a half finger espresso crema colored head. Had a medium retention which eventually left a lace around my cup.

Nosing my glass, I got a strong presence of the roasted barley. It was coupled with aromas which resembled burnt caramel, toasted almonds, and dark cocoa powder.

The taste follows the nose as I got a lot of the roasted barley upfront with burnt caramel. These flavors then developed into toasted sunflower seeds, roasted almonds, and finished with a very mild coffee-like bitterness.

I felt that this was very smooth and drinkable. Not heavy feeling at all since it was pretty medium bodied with medium to low amount of carbonation.

Overall, I really enjoyed this beer. For a standard American stout, I feel as if this is very smooth, inoffensive, amazing tasting, and quaff-able.

This is a standard-bearer of the stout class. One of my first stouts and it established a high bar. Consistently provides enjoyable drinking from the aesthetic of matte black with tan head to the thick mouthfeel and subtle bitterness of remnants of burnt malt.

Poured from 12 oz bottle into American pint glass. Deep, brown-black color, but minimal head or lacing. Nose of licorice and dark roast coffee, very nice. Mouthful of rich flavors, malty, bitter, coffee. Lack Of carbonation so felt a bit flat. I am a fan of this beer due to its rich taste and flavor.

Poured from a 12 oz bottle into a shaker pint

Overall: An excellent brew. A staple of the American style.

Poured from a 12 oz bottle into a New Belgium snifter.

L - Extremely deep brown color, just short of black. Good clarity can be seen around the edges when it is held up to the light, otherwise it is too dark to let light through. Light tan colored head subsides rapidly to a thin sheet of fine bubbles and similar lacing.

T - The roasted grains dominate the flavors for me, followed by chocolate, then espresso as the palate develops. Just before the off-dry finish there is a return of the roasted grains, coming across like slightly burnt kernels of barley. Across all the other flavors there overlays a sweet fruitiness that rounds out the burnt notes. I believe it must come from fermentation character, but I am not sure.

F - Medium to thick body with only low carbonation to lighten it. Strong hops bitterness blends well with the bitterness of roasted grains. Some alcohol presence, but not hot.

O - A fine example of an American stout.

Very well balanced Stout with a great aroma, drink and finish. Smells like a very rich malty coffee bean and the taste gives a rich espresso taste that lingers smoothly and is delicious. Perfect everyday Stout!

Pours a dark brown to black color with at least a finger of beige head. The nose and flavor profile are nicely roasty. The body is spot on for the style.

This is a plain old solid stout that is not huge but very tasty anyway.

This paired well with my roast pork au jus dinner.

Flavor: Flavor follows the nose with EVEN MORE dark chocolate. Hints of bitterness from the dark chocolate, but not roasty. I would describe this as a decadent triple-chocolate cake from a restaurant. Not ordinary, and one bite has enough chocolate that you realize you didn't need the whole dessert. Hints of airy bitterness to give you a breath. Finishes relatively sweet. (4.50)

Overall: A delicious dark chocolate stout. Less bitter and roasty than some. More chocolate than most. I would describe this beer as a triple-chocolate cake. One bite and the cake had more than enough chocolate, but by the time the frosting hits your tongue, it's overwhelming and you're offering a bit to everyone around you. Not too heavy though, so I won't be sharing the beer, but probably won't be drinking more than one in a night. Absolutely delicious dark chocolaty flavors though. (Final Rating: 4.32) Might have higher reviews the more I try it.

12oz bottle into a tulip.

S: Rich, straightforward roasted malt. Dark chocolate is the dominant note, but there are hints of coffee, walnut, and dank resinous hops. The deeper I inhale the more of the hoppiness comes through - first pine, then cannabis. Quite enjoyable, and distinct.

T: Hops give a jolt of herbaceousness right up front, with the bittersweet chocolate and coffee building in behind. Only a hint of malt sweetness on the midpalate, with major bitterness on the finish and a long, bitter, smoky aftertaste. Intense and enjoyable, but a bit unbalanced.

F: Medium-bodied and well-carbonated. Closer to a Porter than a typical Stout in terms of body, but perfectly fine.

O: Really enjoyable hoppy Stout. The aroma is particularly complex and delightful, and I enjoy the assertive bitterness that is so difficult to find in any style these days. Really well made beer.

Bottle dated 9/18/19, poured into a pint glass. Color is dark, dark brown, slight amount of light brown head, minimal retention, no lacing. Smell is of faint coffee along with a bitter aroma. Taste follows, bitter, with coffee dominating-pretty straight forward in the taste department. Some dark chocolate sweet/bitter combo also present. Mouthfeel is a little thin with a bitter cocoa/coffee aftertaste, not at all off-putting. This is the first "lighter" stout I can remember trying and overall, its pretty darn good.

Pours a clear deep dark brown pushing black with ruby highlights and a short lived finger of creamy mocha head.
Smells of espresso, dark chocolate, roasted barley, hint of dates, and licorice.
Taste of bitter dark chocolate, burnt toffee, touches of molasses and licorice; building espresso flavours with a roasty bitterness at the swallow.
Medium mouthfeel with moderate creamy carbonation leaving a lingering espresso/char bitterness.
Very good, though I perhaps do not love as much as some by apparent ratings.

Obsidian Stout from Deschutes Brewery
Beer rating: 94 out of 100 with 4162 ratings