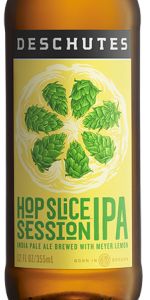 Not my IPA profile but refreshing enough to finish. I'd have another, but only in a pinch.

A good hoppy ale. Golden hue. Sudsy head that sticks. Hoppy smell with a touch of sweet pineapple. Taste hop bitterness upfront with a grapefruit rind bitterness that lingers. Maltinesss is hiding on this one a little.

But the best session ale, but pretty available.

Smell is citrus, and malt.

Flavor is pretty watery, with a lemony hop and minimal malt.

with a name like hop slice, i expected a bit more of an ipa type out of this one. instead, its a sturdy but drinkable balanced glass of ale with as much grain to it as there are hops, malty for a summer brew, but still on the lighter side, kind of a weird recipe, and i wouldnt want to drink eight of them, but one pint was a nice little something different in a summer brew. i get some creamy wheat in the grain base, and some sweeter, smooth crystal types, with a honey note about it. the hops are more fragrant than they are flavorful, with a sort of generic citrus pop in the nose, and a more relaxed herbal crispness in the flavor, bitterness is very low. i definitely get the lemondrop hops in here too, and they create a warming baked good sensation with the richer grain complexion, still very light and i think appropriately summery, but different for sure. good carbonation keeps it feeling light, and the low alcohol is always appreciated in a beer designed for warm weather. this isnt my favorite deschutes seasonal release, not by a long shot, but its cool to see them do a little something different with their summer beer this year.

edit: i just encountered a bottle of this that was best sometime in 2017, five years ago now, i assume its been refrigerated the whole time, its old and faded sure, but really its not bad, maybe a testament to its overall quality, like what other beer in this style would even be tolerable with this much age on it? not many. i even still get some of the hops through the oxidation. no real point in saying any of this, other than that its best fresh, duh, but not miserable even as a relic...

Came in a standard pint glass a slight hazed lighter golden with a thinner white cap atop.Lemon pith and cereal grains stood out most in the nose with underlying pine resin,more on the citric/lemon side.A thinner but crisp feel,expected to be on the lighter side.Lemon pith again is the main component on the palate,I get light grapefruit behind it,dryer and crisp with cereal grain notes in the finish.A great beer to have in this NC heat but not anything to run and get...In my opinion.

Nothing complicated here, but works well as a summer beer.

S: citrus with a touch of ditch weed, floral, bread crumb and a hint of toast

O: a juicy, full flavored beer to quench your thirst during the hot summer months.

This is a really good summer ale. I'm surprised it didn't garner a higher review. I was a bit hesitant to buy it because of the 'lemon' on the label description. But this is really tasty. Drinking in Boise on a 100 degree day. Didn't want to get anything too hoppy. Very floral and very well balanced. Glad Deschutes is found in Idaho.

This is a solid summer ale, light and refreshing. It's a bit darker in color than you'd expect for a golden ale, but the floral and citrus notes really come through in the taste. I don't quite know how to identify which varieties of hops are in a particular beer, but this blend was a good one, and at only 35 IBU, it's not overly hoppy at all. A good summer seasonal.

Pours a golden color with a thick, white head that dissipated fairly quickly. Smells of pine and citrus with a little bit of grain. Tastes of sweet malts with a little lemon citrus and a finish with floral notes. Fairly light body, crisp, mild. Fairly inoffensive, easy drinking sessionable beer, good for a hot day.

T/F: Light grains give this a light body. Somewhat thin. The hop profile is relatively mild... not overly bitter and tends to the citrus... lemon and tangerine peel. Floral hops. Zesty carbonation. Goes down easy... finish is more lemon.

Pours clear, gold in color with 1/2 inch head. Taste is grain, grass, honey, caramel, and light citrus hops. Light bodied, medium-high carbonation, slightly bitter. Would think I was tasting a German pilsner. Tasty and goes down way easy. Not the most complex beer, but one I could have several of on a hot day.

Wanted to try this summer ale. Can away underwelmed. Very little taste other than a flat sour lemon yhat lingered unpleasantly. Won't be having another one.

The aroma is sweet bready malt with lots of lemony fruit and floral hops.

The flavor is sweet biscuit malt with lots of citric lemon and a floral hop finish. The mouthfeel is medium bodied with low carbonation.

Overall, a nice fruity summer beer. I like the lemon, but less biscuit and a little more hops for me.

Pours a hazy gold with a white head. Smells of citrus, fresh hops, and honey. Tastes of lemon and orange zest, fresh floral hops, and a little sweetness. Medium bodied with medium carbonation. Overall this is a wonderfully refreshing IPA by deschutes. Perfect for the summertime.

Poured from a bottle into a pint glass. Slightly hazy yellow with a brief white head and good lacing. The smell is subdued but is lemony. The taste is crisp and lemony with a slight bitterness at the end. Good summer beer.

Nice if you Consider it a session ipa. The taste builds on you. A little light at first. I don't want to use the word watery, but I will. Halfway through the taste and feel build into floral, slightly fruit, hop feel.

O: Perfect Session IPA, not the most flavorful or anything but you could easily knock 6 of these back. Good beer overall.

A: Pours golden amber with a frothy eggshell head that settles to a light layer and leaves some nice lacing.

O: I wish some of the Galaxy and Amarillo came through more, but still a solid summer session IPA.

T- slightly juicy citrus hops up front mix with some soft floral notes, mid-palate gives some malty crispness, the finish gives more citrus with a balance of caramel malt to close it out

Once again, the Bottle Backlog here at Chez Woody & its attendant eradication brings the opportunity for a brewery horizontal. In this case, I have a load of Deschutes beers, all of which are marked as "Bottle Conditioned", which makes it even cooler.

Having Pop!ped the cap, there was no question but that I would be conducting a gentle pour into the awaiting glass. Once sufficiently decanted, it was time for an in-glass swirl that raised two fingers of foamy, rocky, eggshell-white head with decent retention that left sticky lacing in its wake. Nose had a lemony tartness & I was curious to taste it. Mouthfeel was medium. The taste was not especially hoppy, but the lemony citrusiness was quite pleasant and spritzy. I was a little early for Summer, but on an 80-degree day in mid-May, it was not unreasonable. Finish was semi-dry, citrusy and refreshing. Not bad.

Light golden color with nice head and sporadic spotty lacing. Aromas of lemon and light malt. Taste is refreshing with tastes of lemon, lemongrass, some malt and a light background of bitter hops. Mouth feel is good and slightly crisp and finish is fairly clean with lemon, lemon rind and some malt at the end.