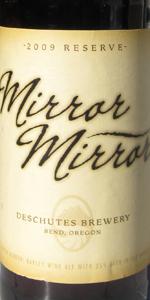 The Reserve Series romance all began with our first release of this limited-edition brew. Mirror Mirror, born of a double batch of Mirror Pond Pale Ale, is an inspired barley wine ale layered with intriguing nuances. Explore this latest incarnation and enjoy its delicious complexity in every sip.

2014 bomber poured cellar temp to a tulip glass. Color is still clear dark caramel, with lively carbonation. Nose gives you a fair amount of wine and wood. First sips are prominent sweet malt base, heavily influenced by the wine barrel aging, with a sneak of caramel sweetness poking at the end. Mouthfeel is thin to medium, but it works for the profile. Alcohol has no bite, but brings some warming, and a very quick cognitive effect. After a glass, it drinks bigger than the 11% ABV. Temperature warming brings out more raisin and stone fruit flavors. Fresh would have been interesting to try, but it’s still a nice beverage with time on it.

2014 seven year old vintage. Long time want. Overall stellar other than obsurdely thin. Still, im going back to buy the rest the bombers for they have.

2014 bottle -- good beer, but the overly aggressive tiny bubbles in the carb detract from what is an overall mellow buttery and malty beer experience.

2014 vintage. Along with Not the Stoic, an amazingly well-ageing beer. Balanced, smooth, great mouthfeel. Barleywines aren't among my favorite styles, but this is outstanding.

I can't believe I've never had this before, but as per their own written description, it's basically just a "big" (and stale) IPA.

First, it definitely shows its American bent with hoppy, dank, and sticky characteristics, but it just comes across like an over-powered IPA ala Dogfish Head.

The medium body is syrupy, with sharply woody and resinous pine that's unable to suppress notes of toffee and a cat pissy heat.

Poured into a Fremont small snifter. A long overdue two year comparison of vintages. I should have done a fresh 2014 vs. 2009, but forgot the bottles in the cellar and then decided to wait until the newest presumed version (2019). But it looks like that is not going to happen, with Black Mirror showing up instead (it was quite nice). So here is a side-by-side of a slightly overdue 2014 bottle and a long overdue 2009 bottle.
2009: Pours a slightly hazy, medium to dark reddish orange with a fine, three finger light khaki head with good retention and lacing. Aroma of caramel malt, fresh and dried plume, dates and a little white wine. Flavor is caramel malt, apple cider, plums, raisins, oak and oaky vanilla; finishes a bit boozy with fortified white wine notes and residual oak with a slight astringency. This not longer has much of an English barleywine character any more, but is interesting.
2014: Pours a medium to dark reddish orange, light head dissipating to a thin filme and light lacing. Aroma of dry caramel malt, plums, dates, raisins and oaky vanilla. Flavor is dray caramel malt, dates, raisins, dried plums, a little citrus, oak and mild wine tannin. Finishes a bit brighter with oak, light plum and apple juice, lingering wood and tannin; a suggestion of oxidation. Medium bodied with light to moderate creaminess. Very nice. This tastes great and has aged well. I'm guessing this is approaching its age limit, but it tastes fine right now. I'm grateful that the wine barrel character is mild; it does add some interest, but I'm not a fan of strong red wine tannins in beer and this flies under the radar.
Well, the 2009 is over its aging time. It has lost its deep dark fruit character and oddly has assumed vinous notes even though this version was apparently not in wine barrels. It actually has the brighter light fruit notes of an American barleywine, but I don't know if that was the case while fresh.
The 2014 is excellent and aged gracefully. It has some oxidation, but retains the dark fruit character of the style enhanced by a very mild vinous character that was well handled. I look forward to slowly opening the last bottles of this over the next few years. I've always been a fan of Deschutes and this is a worthy barleywine from a fine brewery. I regret I did not try this fresh. If they brew it again, I will not miss that opportunity. But when it comes to waiting too long, this turned out quite nicely.
My review score is for the 2014 bottle; it's not fair to make any assumptions about the 10 year old one.

Raisin, brandy & a sweet booziness in the nose.

A complex beast of a barleywine; substantial & very enjoyable.

S- bold caramel and toffee aromas up front, followed by stewed berries, figs, raisins & dates. Undertones of tobacco & leather, as well as red apple skin. There's a vinous oaky note that closes it out, with a hint of red wine which seems to compliment those berry-like notes

T- melted caramel and toffee dominate up front, along with an aged hop note that you typically find in an American style barleywine. Mid-palate gives earthy notes of tobacco, followed by dark fruit notes of black cherry, raisin, fig and stewed blueberry. The finish brings out the barrel, adding oak and vinous red wine. The linger gives more caramel and toffee

M- medium body with moderate carbonation leads to a creamy mouthfeel that continues into a velvety, slightly warming finish

In my teku, the beer was a burgundy color with a small tan head that was apparent only at the circumference of the glass.
Aroma of caramel/molasses, dark fruit, and wine.
Taste followed the nose. Toffee, dark fruit, red wine, and some oak.
Medium-bodied, somewhat sticky mouthfeel.
Nice beer!

2014 Release. Bought at downtown Portland brewpub. Brown and cloudy, nice and thick, malty with some wine flavor, warms me up on the way down. A bit more carbonation than I was expecting but still fantastic.

A: Poured into an oversized wine glass to a dark brown with a slight reddish hue topped by a dense finger and a half of light tan head which retains well and leaves excellent lacing
S: Smells of dark fruits and sticky caramel with a little red wine and some oak influence
T: Taste is dark fruits with a little spice, red wine, and some peppery notes, nice dry oak notes as well. Hints of vanilla with some caramel and more red wine. Swallow is more red wine and oak with some toffee and lingering dark fruits
M: This beer is big and sticky on the palate while still being a little silky. Carbonation is low but adequate for the style while the beer has a drying finish.
O: Overall this is a really great beer that time has done well. This one tastes fantastic without any sort of off flavors from the age. I'm honestly surprised by how well this one is drinking. Definitely worth a try and really happy to have ten more of these.

A - Pours a murky reddish brown with a one finger off white head. Nice amount of soapy
lacing.

O - This is a top notch barleywine. The flavors are rich and inviting. The alcohol is hardly noticeable making this dangerously drinkable.