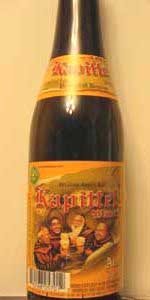 Pours a hazy golden color with a medium top of white head that dissolves in a quick pace. Aroma is of malts,bread,caramel,apples,pears and spices.
The taste is sweet and fruity at the start with malty notes of caramel in the back. It then gets notes of spices and herbs in the flavour and then It finish of with a quite strong bitterness. The aftertaste has a decent lenght, but I would like more balance in all the flavours. The mouthfeel is quite smooth consider the high abv. Medium carbonation with medium body.
All in all is a good and solid triple, but not the most exiting one out there.

A: Poured from the 330mL bottle. The beer is a cloudy pure orange color with lots of sediment floating around inside. The head was foamy, 3 fingers, off white and stuck around a little while.

S: Citrus rind, brown sugar, lots of yeast. Green apple and pineapple make an appearance as well as a balancing ready character. This hits all the notes, aroma-wise.

T: Malty with lots of bread and some caramel, then a lot of sugar. Finish is bitter and boozy with a light citrus-rind hop note and then a lot of rummy alcohol. Fruity yeast on second glance. Kind of off-balance. Has all the characteristics of a balanced flavor but it doesn't quite come together as well as some others in the style and strength.

Overall: This one wasn't bad but I wouldn't pick it up again. There are too many other good triples out there to try. This one had all the right characteristics but didn't come together somehow.

Aroma of bready malt and golden raisins with a distinctive hit of sharp hops.

Flavor is interesting and a bit puzzling. At first there's the rich, deep flavor of rich malt leaning toward caramel then just as the ripe fruit emerges we hit a hop wall of decided bitterness. At 10% ABV there's a lot in there and it's as if someone decided to toss in an extra bushel or so of hops just to make sure with the result being an off balance in favor of the hops. I can only guess which hop variety but at this level of use perhaps that doesn't matter. A complex brew that mostly works but the hop bitterness is like someone put too much cayenne pepper in the gumbo. The flavors compete rather than complement.

Not your typical Trippel. It is a complex brew that's well made but I wonder if it wouldn't be more palatable if both the ABV and IBU were cut back considerably.

The flavor starts like the smell but there is a hop presence that is significant to bring balance. Rich body as expected with a muted carbonation. The alcohol warmth peaks during the swallow. Malt leaning aftertaste.

Poured from the 33cl. bottle into a tulip glass. Best before May 2016 I think. C notched.

Opaque orange amber body color, with hollow occasional side streams of carbonation on the glass. Not much going on in the middle, and a thin soapy head that barely makes a finger. Light white in color, minimal retention and a very soapy bowled puck.

A pretty solid and basic nose for a tripel. Soft orange hinting fruit but a bit of bread sweetness mixing in a little bit as well. Not very hot either which is a nice touch, slightly a little hint of metal ferrousness a bit too but very small at least.

Very noticeable and sharp stinging palate. Hot carbonation on the tongue and a bit of mineral warmth. Mostly a boozy flavor but some small hints of sweetness and bread come through. Phenolic and boozy finish with a good amount of warming pit of the stomach feeling, and more of a bit of a metallic almost high malt liquor sting.

Pushes a bit too hard and sacrifices some good qualities in the process. Drinkable, but sticks out too boozy in the tripel realm amongst the classics.

Light orange haze with a small head of foam that quickly turns into lacing. Fresh smell of malt, yeast and orange. Full taste of tropical fruits, spices, yeast and honey, with earthy notes and resin in the finish. Moderately sweet. The alcohol is definitely present, but manages to highlight the other flavours. Mouthfeel is smooth and warming. Nice complexity; recommended tripel.

This one will leave your tastebuds tingling! High ABV manifests in the taste. Aroma is light and appearance is good, orange gold with oily head. But the taste is where this beer shines. Sharp and spicy and heavy bodied, this a great beer for a cold day.

Pours gold with an orange hue, big booming head that goes somewhat quickly. Not as much lacing as expected. Nose is very clean, some yeast and light sweet malt notes, but not a typical tripel. Flavor is initially sweet and malty, then alcohol. Not sure I'd go so far as to say the 10% is obvious, but it is certainly noticed. Flavor is light malts and a touch of sweeter heavier fruits, but it lacks depth. Strikes me more like a strong Belgian pale. Just okay.

Strong belgian tripel of a orange/copper color and a big head.
Smell is malty and yeasty, with grainy and earthly notes too.
Taste has more of a fruity character, specialy dark fruits as plum.
Body is high and carbonation appropriate.
Possible to smell/taste a bit of the alcohol, but it is well hidden for a 10% one.

A: Orange rustic brown with a haze, some visible carbonation and almost no head of a yellowish colour.


O: Got in Kunming, drank here April 25. Was overjoyed to find this in China, especially after enjoying others from the same brewer while in Watou, Belgium. Very smooth feel for the style, lacking the same harshness many other triples have.

Kapittel Abt Ale poured a cloudy dark gold color forming a 2-finger foamy and bubbly white head that held well. The head eventually reduced to a 1/2-finger foamy collar around my tulip glass. The nose was dominated by light fruit; i.e., apples, and pears followed by light peppery spice. The taste begins with a spicy fruit like apple and bananas followed by yeast, then light hops with a nice alcohol warming. Mouth feel is medium, creamy and has a generous amount of carbonation.

Kapittel Abt is not my favorite triple - however, a solid offering nonetheless.

A: Pours a cloudy dark yellow to orange color forming a medium white aired head that dissipates quickly leaving practically no lacings in the glass. However, a thin layer remains forever on the top

S: Traditional Belgian Triple in the nose: Sweet, malty and spicy. Notes of pale grains, caramel malts, crystal malts, candy sugar, coriander, cloves, vanilla and honey. A bit fruity too with some notes of pears and figs. Very bready and earthy yeasts. Some flowery hops and alcohol in the end

330ml bottle. At first, I thought this was the St. Bernardus stuff, but apparently there are other brewers in that little part of Belgium, with similar design paradigms.

This beer pours a slightly hazy, medium golden amber hue, with four fingers of puffy, loosely foamy, and finely bubbly off-white head, which leaves but a few instances of lightning strike lace around the glass as it genially recedes.

The bubbles are still well in play, keeping things tickin' along, the body a hefty medium-heavy weight for the style, and mostly smooth, but for the encroaching heat of the alcohol. It finishes on the sweet side, the caramel and booze providing an unsteady representation as such, while the spice and yeast continue their anarchic takeover plot.

An adequate Tripel, the booze just a bit too informing on the whole affair, which is usually what gets me about this whole style. It isn't all that pushy here, but enough, that despite the overall warming pleasantries, I would have to toss this on the remainder pile.

Pours a hazy orange with a foamy off-white head that settles to a small cap on top of the beer. Foamy streaks of lace form around the glass on the drink down. Smell is of malt, grain, honey, spice, and alcohol aromas. Taste is much the same with spice and yeast flavors on the finish. There is a mild amount of spice bitterness on the palate with each sip. This beer has a lower level of carbonation with a slightly crisp mouthfeel. Overall, this is an above average beer but nothing really stands out in terms of aromas or flavors.

(D)- Not bad. Straightforward enough and heavy on spice and clay.

11.2-ounce bottle, served in a goblet (01/08/2013)
Appearance: a beautiful, hazy, burnt orange color; sediment floating around in it; thin white head the leaves a collar
Aroma: this smells like a malt and fruit explosion; caramel; I think I get some banana, cherry, grape, pear and maybe some other fruits; yeast/bread; a hint of spice in there too; man, this smells really awesome, best smelling beer of recent memory
Taste: starts kind of tart, lemony and appley; moves into some nice sweetness, caramel, malt, bread; the sweetness carries through the finish which is more fruit, some spiciness, a little alcohol, and I think a little hop; dry, bitter aftertaste with some lingering fruit flavors which is quite enjoyable
Mouthfeel: full-bodied and viscous; great carbonation
Overall Impression: thanks to Fr. Jonathan Perrotta for the Christmas present!; I still have yet to meet a Belgian that I didn’t like, and this is no different; man it smells fantastic; it’s kind of strange in that it is so sweet for most of the taste but the aftertaste is fairly bitter; well balanced, smooth, and very drinkable

Appearance: This beer poured a one ginger frothy head that has reduced to a thin layer. It is a hazy pale orange yellow hue with some clarity and plenty of bubbles coming up through the glass. Nice lacing on the glass as the beer was drank.

Taste: Same as above. Vanilla and spices are a good feature. Mellowing bready notes and warming alcohol.

Overall: Another solid tripel to add to the list. 2nd of the 3rd kapittel beers I got from volunteering last years BBF. Solid score.

Very unusual beer, almost a toffee finish with the dose of caramel. And I agree with a few other reviewers, almost too sweet, so I'd call this a sippin' special occasion beverage. The color is beautifully clear amber, and the reasonably light head lingers. My judgement of this fine beer may be blunted by the many Belgian blonds, which this is definitely not. It is much heavier, thus the quad/tripel comparison, but still quite drinkable for special occasions. I paired it with some fine aged Gouda and it really complimented the taste, so I recommend trying some food pairings to offset the sweetness.