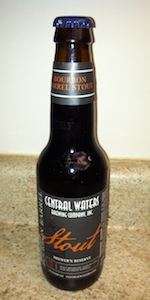 The brewery's most highly sought after beer, this imperial stout is aged to perfection in oak bourbon barrels. Look for this tasty teat to contain hints of bourbon and vanilla with roasted overtones that is [sic] sure to please any connoisseur's palate. Serve at cellar temperature from a snifter glass and enjoy this expression of out passion for brewing.

12oz bottle of the 2015 vintage, received courtesy of the generosity of @Ri0. With this one down, his boxed beer tour of the upper Midwest is down to three.

Poured into an Iron Goat snifter, this looks a coal-black color until held up to light, when the faintest mahoganyish edges can be seen. There was a modest, tan colored head that quickly receded to a bubbly foam collar.

Rich, woodsy, vanilla aroma from the barrel aging dominate the nose, initially. As it warms, there are notes of chocolate, toffee, coffee, leather, and a tiny bit of dark fruit aroma.

When this hits the taste buds, I’m reminded of the nickname of Mel Tormé. It’s rich, velvety and decadent tasting. The bourbon barrel aspects are better balanced with the other elements I noted above in the aroma. In particular, a chocolaty flavor jumps up about midway through. It doesn’t drown out the other aspects I noted there, but it’s “large and in charge.” The finish is slightly dry.

Big, full body to this, to no one’s surprise. The mouthfeel is rich, velvety and creamy.

1PM was perhaps not the greatest time to have this. It would have been better after a rich meal, as it’s practically a dessert all on it’s own, yet it’s not cloyingly sweet. This is a great beer. I’d love to have access to this regularly, and be able to set some down and see what a little aging does to it. Thanks, Ri0!

I am an enjoyer of delicious stouts, and this is one of my absolute favorites.

It's f###ing delicious. This beer reminds me of Hoppin' Frog Torris, beautiful rich chocolate and warmth. The Barrel here is a perfect complement to the flavor profile of the beer. Some great berry notes as well.

For lack of going on for too long, if you like chocolate and bourbon, this is going to be a great beer for you. I am a simple man but this beer hit my benchmarks of those two. Not very smokey, with heavy fruit and chocolate, plus this beer does what many BA stouts fail to to: get the barrel right. Somehow the flavor of barrel is very prominent while letting the underlying flavors shine through. Hard to do!

2014 bottle opened in 2021. From fridge temp. Pours black with some head. Quickly dissipates. Dark fruit dominates the nose. Not totally sure if this is a good thing or not. Cherries, blackberries, and strawberries. Chocolate and roasted malts are there as well. The taste is really good. Not getting much barrel, but this starts to come through as the temp goes up. Mostly dark fruit – like raspberry dipped chocolate. Roasted malts, oak, black licorice, molasses, fudge, and bourbon. Gets better as it warms. Mouthfeel is nice and thick.

Black and beautiful. Had about a finger head and smells of semisweet chocolate, molasses and dates, prunes or raisins. Taste follows the nose and I get some marshmallow creaminess with the semisweet chocolate, the dark fruit and a hint of alcohol. Taste is leaning a bit sweet too. Mouthfeel is thin but leaves interesting flavors on the tongue. Overall a fine Bourbon Barrel-Aged Stout. A nice change from the IPAs. SPECIAL THANKS to @jzeilinger for sharing this excellent stout. A 2020 Vintage.

I didn’t mean to age this guy this long, but I’m excited to see how this will go. I think like a lot of Midwesterners, this was my first barrel aged stout. It’s a classic beer! I remember buying it years ago thinking I was being fancy spending so much money on a 4 pack of beer for my Mexican BYOB dinner. I paid no attention to the abv, and promptly got drunk at dinner. Unlike Goose’s BCS, this is the perfect introduction to a barrel aged stout. It’s a strong beer, but not overwhelming for a newbie like BCS. After drinking these for a few years though, BCS and higher ABV stouts usually take the win for me. Still, I can enjoy this on a weeknight at least. Onto the beer...
I smell the bourbon which for me is hugely positive. I’ve grown to LOVE the motor oil double barrel 15% and above barrel aged stouts. On the nose, it’s clear this isn’t that but it’s going to be tasty. It’s a bit thin for my favorites. Black Gold is thicker. This is like BG’s baby brother. Drinking it I feel I’m drinking a nice barrel aged Porter rather than a stout. There’s wonderful vanilla notes. It’s super smooth which I contribute to the age of the beer. I like the bourbon notes too. I wish I had opened up this versus a fresh one to see how the aging has affected it.
Overall this is a classic beer and would always recommend it. Central Waters knows what they’re doing. Black Gold beats this guy, but I’ll it them again and always recommend them for newbies and experienced barrel aged stout drinkers.

Served in a snifter glass at cellar temp just like the description told me to do.

APPEARANCE: Super dark, black hole-like black. A decent head foams up and sticks around longer than expected, but as with any barrel-aged stout that's close to 11%, it doesn't last long aside from a few splotchy patches on the surface and a thin ring around the edges.

SMELL: Not sure how long this was aged, but the wood comes through strong in the nose, along with a dark, roasted coffee aroma. A little dark chocolate is detectable too, but it is far outweighed by the oak and roast.

TASTE: That oak is still quite strong and really provides a pleasant, woody backbone for a complex array of flavors - bitter dark chocolate, vanilla, deep roasty flavors, a little cherry, orange, fig, and mild booziness. This is really a rich and delicious beer.

MOUTHFEEL: At no point does this beer stray too far into sweet or too dry. The beer starts out with a bitter-sweet, orange-cherry-chocolate and finishes with a warming alcohol burn and roastiness. The sparkle is light, but more present than it is for some other Imperial Stouts I've had.

OVERALL: Just a treat. Every time I can get my hands on some Central Waters I'm happy, and this one did not disappoint. Not sure if following the directions to put it in the snifter at room temp made a difference, but it certainly didn't hurt! Great beer from a great brewery.

Pick this up at the village estate in Ohio 2020 edition into a stein. Great looking beer deep dark blackness mild Brown at the base with a nice half inch of mocha froth. Smell is pretty mild chocolate notes some mild oak a good amount of bourbon some coffee roasts but it seems pretty well blended. Taste is unexpectedly smooth as well very nice rich oak flavor smooth leading to some mild bourbon notes and a nice mend of bittersweet chocolates and coffee roasts. I could see why this rating is so high it's very balanced and easy drinking leading to the mouth feel of medium to heavy and smooth despite the almost 11% ABV. overall I am kind of floored that I only got one of these if it's still around I'll probably pick up a couple more a very smooth and balanced Bourbon barrel aged beer!

This has become one of my favorite beers which I can still find. Although a little pricey it is less than other top of the line and similar type of beer I have had. There are various flavors that others point out but none too strong or dominating. I could drink this all night but I need to hold back given the alcohol content.

12 oz bottle of the 2020 vintage, poured into Gandhi-Bot tulip. Thanks to Sam for sending this one my way!

L: Black body with clear chestnut highlights. One-inch head of tight tan foam that recedes at a moderate pace and leaves spotty lace. A little thin-looking on the pour, but that's to be expected from CW. Just fine.

T: Cola, vanilla, bourbon, dark chocolate, coconut, and booze. The finish is a little astringent and bitter, but everything leading up to that point is excellent.

F: Thin and soft, with ample velvety carbonation. Definitely out of step with the way the style is usually presented, but pleasant enough in its own right.

O: Such a solid beer, deliver a big straightforward dose of what makes Bourbon-barrel stouts so enjoyable. If it had the heft to stand up to its robust barrel character it would be truly outstanding.

2016 vintage - barrel has faded on this a bit, however, there is a fair amount of complexity still in this one - caramel malt, roasty coffee and bakers chocolate. Still hanging on as a worthy cellared stout.

Overall its excellent. Pours black with tan head. Somebow both has the fairly bold roasty malt and bourbon flavors, yet is soft and well integrated. Oak, vanilla, mild caramel, cocoa is all in there. Full bodied, smooth feel.

This is a great BA imperial stout. Comparable to hopping frog barrel aged TORRIS the tyrant, which is a compliment from me. Big chocolate - bourbon and chocolate will delight you if those are your thing. Less coffee than others, and not extremely complex. If you like bourbon and chocolate, stop reading and buy the beer.

I've been drinking this when I come across it for a number of years now – you really can't go wrong with it. Very decadent and extremely consistent quality, and there isn't anything I don't like about it.
If you buy this to get a great barrel aged stout, you'll be making a good decision.

I have had this beer for a number of years now, and the consistency is strong. As opposed to some other yearly brewery's BA stout releases, I have essentially never noticed a difference between years, which frankly I love in a beer sometimes. Surely it changes with age, but if you are reading these reviews in the future, it's safe to say that new versions will be consistent with these reviews even years on. Source: have bought it for 4-5 years now and it's consistently the same quality/flavor profile. Whoever is on QA over there is on it

A good BA stout. Chocolate molasses smell is good, but a little simple. Taste follows the smell, but has a little more complexity to add interest. The mouthfeel seems a bit thinner than expected, with the fine fuzzy bubbles. Overall, a very good beer.

This is a very good to outstanding bourbon stout. Dark black with light head that settles into a thick ring around the glass with slight lacing. Smells good, the usual bourbon barrel (vanilla, oak, etc.) Tastes great, but overwhelmed a bit by the bourbon vanilla and wood—make sure to drink at a warm enough temperature as it improves greatly as it warms. Overall it is really good but not so good that not trying it means missing out on something. Give it a try if you like bourbon stouts and see it on the menu.