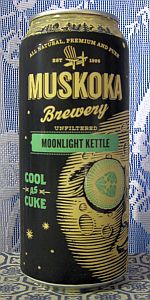 Took me a couple of tries to wrap my head around this one. Unremarkable to look at, clear straw gold, some early lace, then just a thin ring. Cucumber and watermelon on the nose, quite appetizing. Thin bodied, noticeable cucumber flavor, some sweet watermelon. Slightly happy bitterness, dryness. A little bit of a tough finish, but mostly good.

I wasn't certain what to expect here but wasn't disappointed.
Appearance: Golden hue- slightly orange
Smell: No cucumber clues here but a slightly sweet malt character
Taste: First hit is a bitterness-maybe the lemongrass tartness quickly followed by the strong cucumber taste.
Overall: I like it-makes a great hot weather beer-very refreshing.
I'd buy it again.

473ml can - 'if they can put a man on the moon, we can put cucumber in beer'. Way to abuse metaphors, jeez.

This beer pours a slightly hazy, medium golden yellow colour, with two fingers of puffy, sort of rocky, and mildly bubbly off-white head, which leaves some random snow rime lace around the glass as it quickly blows off.

It smells of well, believe it or not, cucumbers (in all their watery green veggie glory), rather reserved grainy and bready pale malt, a hint of earthy yeastiness, and some plain leafy, weedy, and grassy green hop bitters. The taste is gritty and grainy cereal malt, some weirdly condensed cucumber and watermelon rind, more unexpected yeasty notes, and some consistently underwhelming earthy, musty, and grassy hoppiness.

The carbonation is adequate in its palate-supporting frothiness, the body a decent middleweight, and sort of smooth, as an uncertain vegetal acridity takes a minor toll here. It finishes trending dry, the same bitterness ruling the lingering game.

Overall - yep, this is certainly the strongest (flavour-wise, not booze-wise) watery vegetable brew that I have ever encountered. The cucumber actually outshines the base malt, and that's saying something. Not an offering that I could see myself pounding back in a session (even if it's built exactly as such), but I gotta give props where they're due.

Straw and slightly hazy with little carbonation and 3 fingers of off white head.

Smells of cucumbers and watermelon.

Got at the Beer Store in Bracebridge, drinking on Lake Rousseau, May 21st, 2018. Decent and interesting brew.

Appearance - Pours a straw gold with a finger of bubbly white head.

Taste - Cucumber upfront followed by the earthy, leafy, and floral hops. The brew then is followed by the bready malts, citrus, and grassy aromas. The earthy yeast finishes the brew off.

Overall - A refreshing and unique take on the American Pale Ale style by adding cucumber. The cucumber works in unison with the hops and malts to create a very sessionable brew!

Appearance: Two fingers of head and ample carbonation in the cloudy brass body. Plenty of lace and and decent retention on the head end of things.

Smell: There really isn't much there, apart fromsome cucumber skin, which I suppose isn't surprising given it's supposed to be a cucumber beer. Warming doesn't bring anything more out either.

Taste: Starts with a mild straw malt that turns to a cucumber and then a bitter cucumber rind ending that is accented by herbal hops. I'll be honest, I was skeptical and how this would turn out, but the beer pretty much paralells eating a raw field cucumber.

Drinkability: It certain is refreshing and light bodied as I'd expect for this to be. That said, the bitter rind portion does stop it from being a guzzler. Still, with how easy it is on the system, it makes for a solid summer drinker for all but the most sweltering of summer days.

Final Thoughts: I kind wondered how this would turn out, having never heard of using cucumber in a beer. All in all, this was a good experience and if maybe they peeled a bit of the rind back, I think this would be excellent. Still one thumb up.

Looks like your standard pale ale, with a fizzly, dissipating head. Grainy malt aroma, some leafy vegetation, but more indistinct, and not really cucumber-y. Now I'm not a major cucumber fan, but I have had some really good cucumber beers. This...was not one of them. The taste was vegetal and earthy, but again, nothing that really resembled cucumber. More just leafy greens and green pepper, and a somewhat stale dishwater flavor. This wasn't a terrible beer as far as drinkability goes, in fact the pint I got went down pretty easily with my pub grub. But it wasn't a very good beer either, and I wouldn't want to have it again.

An interesting idea I really wanted to like - pours straw yelloew with a frothy head that stabilizes to creamy and leaves good lacing - aroma has significant sulpher and cucumber - lots of cucumber. In the flavour a light lemon, clashes with the cucumber and the effect is sadly soapy!

473 mL can from the LCBO; one of six tallboys in their latest Survival Sampler pack. Can't make out the best before date, but I know this is a relatively fresh can because these mixed packs have barely been around a month (if that). Served well chilled.

Pours a mostly clear straw yellow colour, producing one finger of soapy white foam that recedes within two minutes. A modest collar and cap survive in place, with a small amount of lacing having been generated. Hints of cucumber, lemony citrus, herbal lemongrass and honeydew melon come through on the nose, along with some grassy, floral notes and doughy pale malt sweetness.

Not bad at all - the cucumber is an undeniable presence, but not an obnoxiously potent one (a welcome relief to me). The pale malt backbone is mildly sweet and grainy, with suggestions of doughy bread - however, the adjunct ingredients are far more noticeable (and interesting) to the taste buds. Vegetal cucumber juice, together with fruity hints of lemon citrus and melon rind, provide substantial character to the profile, with notes of grapefruit and herbal lemongrass rounding out the back end quite nicely. A flash of grassy, floral bitterness is followed by some briefly-lingering vegetal cucumber in the aftertaste. Light in body, with lively carbonation that is responsible for its crisp, prickly texture. Light, refreshing and extremely drinkable - I'll admit I was in a rush, but I still knocked the entire can back in about 20 minutes.

Final Grade: 3.81, a B+. Muskoka's Cool As Cuke is obviously an acquired taste - it may be redundant to point out that if you don't like cucumber, there's a distinct possibility you will not like this beer - but I didn't find the vegetal, "salad-like" notes to be especially overpowering compared to the (few) other cucumber beers I've had. Keep in mind, though, that I enjoy the taste of cucumber, so your mileage may vary. The lemongrass spiciness is a tad subdued, but still plays a nice complementary, counterpoint sort of role at the finish. One of the better new beers that Muskoka has put out over the last year or two.

NeilW from Canada (ON)

I'm sitting here drinking a pint of this stuff thinking to myself - why? Why did I do this to myself?

What happens when you take the worst aspects of an APA, a cucumber and put lemongrass in the description but not the beer? Well you get Muskoka's Moonlight Kettle Cool As Cuke of course.

I knew this was not going to go well - but hey - I'm up in Muskoka, I generally like Muskoka Brewery's beers - and it's on tap here so - hey why not. Let me tell you why not....

It poors a clear golden colour. Nothing bad there. Very little head and what little is there dissapates very quickly. Interestingly not much aroma - if anything it is reminiscent of apples and not surprisingly cucumber rind. But to really not enjoy this beer you have to drink it. Hoppy soapy bitterness followed by over-ripe cucumber (is it real cucumber? or artificial? I could not tell you). The description provided by Muskoka (and written right on the tap) suggests I'll be enjoying some lemongrass. Well, I think they forgot it. I certainly cannot detect it. I like lemongrass. It's actually what ultimately made me decide to try it.

The cucumber taste starts to fade but there is a long lingering, unpleasant bitterness. Okay I'm not always a fan of hoppy beers - but I do enjoy them on occassion. This one misses the mark in a big way. None of the citrus notes that can often carry that type of beer. No grain or malty character. Nothing but a bruised cucumber and bitterness that sits at the back of your tongue for much longer than it should.

Moonlight Kettle Series: Cool As A Cuke from Muskoka Brewery
Beer rating: 80 out of 100 with 26 ratings