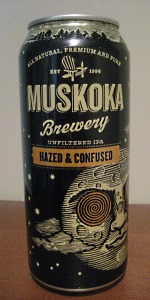 Overall - A brew that on paper sounded good but didn't quite execute on flavour. This one needs more oomph from the hops and more notes from the citrus and tropical fruits. A tad disappointing but other than that an average brew.

So - if I had read reviews before buying I would not have purchased, but... I actually quite enjoyed this (perhaps because it was outdated - best consumed before Oct 2018, or perhaps it just hit me right at the time).

Tallboy can from the LCBO; one of six Muskoka brews included in their latest Survival Sampler pack. Now listed at 6.5%, best before Aug 4 2018 and served at cellar temperature.

Pours a foggy medium gold, with more than a finger's width of soapy white head rising to the surface prior to eroding off at a very casual pace. Ten minutes later, it has been reduced to a fat, lumpy collar framed by a beautiful coat of even lace, both surrounding a smooth, creamy-looking cap. Swirling the bottom and dumping it into my glass made it quite a bit muddier, but I suppose that comes with the territory. The aroma is a bit of a melange - it definitely comes off as fruity, but picking out individual, distinct elements is harder than I'd expected. Apricot and mandarin orange are in there, but beyond that my certainty starts to drop off... grapefruit, mango, pine and lemon zest are my best guesses.

The taste is, well, pretty fruity - but I dunno if 'juicy' is the most appropriate term to use. Lightly caramelized malts and oat sweetness serve as a backdrop, with flavours of mandarin orange, grapefruit and stone fruit providing most of the forward momentum. Hints of mango and passion fruit by mid-sip, followed up by a touch of earthy, green, somewhat resiny hop bitterness; this one's residual bitterness is a bit more, um, robust than I'd expect from the NE style, but that's not a dealbreaker. Medium in body, with very low carbonation levels that are just barely perceptible; the result is a smooth, incredibly soft texture that aids its drinkability.

Final Grade: 3.92, a B+. Muskoka's Hazed & Confused is a decent stab at the beer geek community's latest "hot fad". For reference's sake, this is the fourth (self-styled) Ontario NE IPA I've reviewed in the past week, and while I wouldn't call this one bad (or even mediocre), it's probably the weakest overall. I have nothing against Muskoka - Mad Tom was a true godsend when it was first released, and the same applies to Twice as Mad - but they will probably need to do better than this if they want ON hopheads to start reaching for their stuff on a regular basis, because the competition these days is *stiff*. But that's enough pessimism - I mean, if this were released as a single, I'm sure I'd still pick it up once in a while.

473ml can (@6.5% ABV) - part of the current mixed 6-pack that recently re-emerged in Alberta's oh-so unfriendly tax environment, eh? Plan to be 'hazed', and 'confused'.

This beer pours a slightly hazy, medium golden amber colour, with four fingers of puffy, rocky, and chunky ecru head, which leaves some sparsely strewn snow rime lace around the glass as it very lazily recedes.

It smells rather faintly of gritty and grainy pale malt, generic domestic citrus rind, a bit of earthy yeastiness, and essentially non-existent (so I can't parse them) green hop bitters. The taste is bready and doughy caramel malt, some peppery yeast esters, plain orange and white grapefruit rind, a mild wet stoney thing, and some weak leafy, weedy, and piney (not gonna say verdant) hoppiness.

The carbonation is so-so in its palate-supporting frothiness, the body a decent middleweight, and not particularly smooth, with the spicy yeast kind of traipsing about, unaware of its bumbling effect here. It finishes trending dry, that peppery yeast (and hop?) thing really taking over the lingering sphere.

Overall - yeah, this thing is one hot mess, as I'm not getting any sense of a Yankee NEIPA, in the least. It's almost like a hoppy Saison, with the spice element accentuated. Maybe prepare a bit better before coming back to our province, yer tail between your legs, is my unsolicited advice.

Moonlight Kettle Series (2017): Hazed And Confused from Muskoka Brewery
Beer rating: 85 out of 100 with 15 ratings