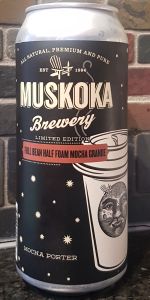 Appearance: Poured with a finger and a half of head that laced modestly and retained the same. The body is pitch black like a stout which is what a porter should look like.

Smell: Some mild coffee and maybe some charred malt in the backround. I mean, I guess that's okay given it's a coffee porter, but the potency of the coffee isn't there and there's not a lot else to comment on. Warming helped it out slightly, but there's not a lot here that is exciting me.

Taste: Alright....so given the name of the beer, my presumption here is the goal is to have the beer taste like a cafe mocha, and it doesn't. It starts with some bready malt that I'm honestly kind of surprised isn't bringing forward a charred aspect here and the turns to a small espresso. Given this beer has lactose in it, I expect to find some sweetness here, and it's just present at all, apart from maybe it's what is reigning the malt in. So as a cafe mocha, this misses the mark. As an espresso beer, well you'd need to really amp up to coffee for that to be the case, as Peche Mortel this is not.

Mouthfeel: The carbonation starts to go a bit flat around the halfway mark, but I do like the mild coffee aftertaste is clean and doesn't cling very much. Transitioning is ok, but it doesn't cover a lot of ground from bready malt to coffee. That said, as things shake out, it does leave you feeling a bit dry after drinking.

Drinkability: On the heavier end of medium body, which is fine for a porter, especially since the "foam" in the branding should imply a bit more airiness. I mean, I had it for an up at the crack of noon breakfast, which is really what dark coffee beer is made for, so it does fit that niche, but I wouldn't want more then one, as it's a little dry. Settled down well though for a heavier beer, so that's something too.

Final Thoughts: The real name for this beer is Half Bean clean single espresso. There isn't any sweet note or other notes I'm picking up on apart from some malt and espresso. I mean, it's not a bad beer, but run of the mill mild coffee porter seems like the apt description here. I wouldn't go out of my way for this, unless I needed a coffee beer when I was vacationing.

Appearance - Pours a dark chocolate brown with three fingers of bubbly head that fades fast with large bubbles. Looks like a flat cola.

Taste - Robust flavour of the roasted malts, cocoa, and coffee. Earthiness and bitterness from the hops. Aftertaste of bitter coffee grounds.

Mouthfeel - Medium bodied with moderate carbonation. A little dry in the finish.

Overall - Very nice delivery of this mocha porter in regards to aroma and flavour, but the appearance is lackluster for me.