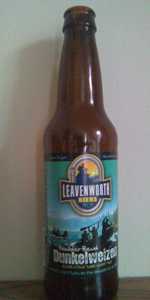 Can't tell whether this is affiliated with Fish Tail or just a brewery with similar uninspired name and product.

Taste was not inspiring me to think of this as a good dunkelweizen. While its a style I don't jam on, there have been good ones, so its not like I always hate on this style. I mean, I don't like anything from this brewery. Bitterness and astringency were not what I was looking for. Some toasted like dark bread feels. Cola like carbonation and taste at times. There is something about it that tastes more like a doppelbock than a dunkelweizen. They went with more of a scorched malt stout/porter/brown vibe meets lager yeast moreso than a hefe yeast. Tastes much stronger of alcohol in the taste and mouthfeel than a 4.7% beer should be. Fuck this was like Lobotomy Bock, that beer really sucks. Avoid this one too.

Dark brown with three fingers of five minute tan head that leaves splotches of lacing.
Smell is coffee chocolate.
The taste is coffee chocolate with a touch of herbal bitterness.
Mouthfeel is light to medium with modest carbonation. The finish is dry and balanced.
Overall a pretty good beer for the style. This beer was over one year old from a twelve ounce can.

As the days become a little cooler and the days a little shorter, autumn is in the air. That calls for a dunkelweizen. On to the beer:

Dark leather brown colored and topped with an inch of creamy head and holding on top well. Looks great and so does the lacing, though it smells nothing special. A note of red apple, a dash of dark toasted malt, no spicy aromas detected.

Boulder Bend takes on a sweeter flavor with a toasted accent. It even carries some astringency that I would rather see muted. Over-toasted apple bread appears to be the flavor this beer is going for, along with dark chocolate. The flavor goes all over the place. Feels okay; medium bodied with very light carbonation hitting.

Boulder Bend could use some tuning, or the kayak will risk capsizing at the bend.

Pours an almost opaque super dark orange-brown with a foamy khaki head that settles to a partial film on top of the beer. Thick rings of lace line the glass on the drink down. Smell is of toasted malt, roasted nut, burnt caramel, and earth aromas. Taste is much the same with toast, roasted nut, burnt caramel, cocoa powder, and earth flavors on the finish. There is a mild amount of bitterness on the palate with each sip. This beer has a lower level of carbonation with a slightly crisp and medium bodied mouthfeel. Overall, this is a good beer with a nice mix of toast, nut, and caramel qualities all around.

Meh. A dunkelweizen which is best described as a "dark wheat" beer. Poured well, and was a dark hazy color. Thought it was going to be a cross between a wheat and a brown ale. Pretty disappointed. It was more like a porter without the big malt flavors. Thin, watery feel. I wasn't a big fan, but I won't give up on the dunkelweizen.

Poured into my St. Martin tulip from a 12 oz can

Appearance is a dark opaque brown with amber hues through the light and a sticky finger of off-white head with small tight effervescence leaving very minimal lacing.

Smells just like a porter with filbert, sweet dark chocolate and raisins.

Mouthfeel is lively on the tongue, but otherwise smooth and creamy and goes down easy.

Overall, it would seem as if this beer is missing something or is misidentified as a dunkelweizen as it drinks much like an American porter or brown. As a beer in itself it is very flavorful, drinkable and I did enjoy it.

Appearance - Pours cola brown with a half finger head that's light tan in color. Sub-par retention, breaking down to a thin, broken layer of suds.

Overall - Good, but calling it a dunkelweizen is quite misleading. This is as Americanized as Widmer's 'Hefeweizen'. Flavor is akin to an American brown ale. Had they just left out 'dunkelweizen', I would seriously consider giving it a higher overall score, but until then...

Pours a dark cloudy brown head, a medium beige head some light lacing. Aroma and taste is of dark lightly toasted caramel malt, yeast and some grain flavors. A medium body with light carbonation. Finish is lightly toasted caramel malt, yeast and grain. Aroma and taste seem a bit mild for the style, but still an ok drinking brew.

Pours a half finger of head on a dark brown, almost black body.
The aroma has some chocolate malt, and some burnt malt.
The taste starts with burnt malt, and dies out with some chocolate and mild sweet note. Short but good profile.
The texture is crisper with soft edges.
It tastes more like a black lager than a dunkelweizen. Either way it's not bad

nice pour, good head, great color. Tastes closer to a light porter than a wheat. Not much wheat taste or character here. Overall, very nice flavor with a crisp, clean finish. Some malty and possibly some choclately flavors. Overall, a well done beer sitting above average on the scale !!!!